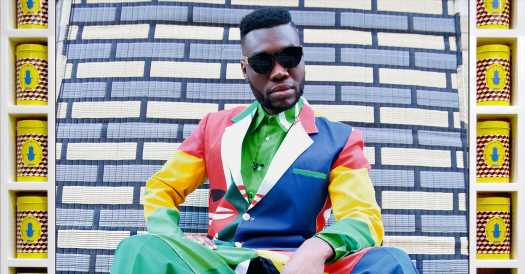 Hassan Hajjaj, who was born in Morocco and raised in London, came into photography by way of streetwear and music promotion, and you can see it in the explosively joyful color portraits of “My Rockstars.” Hajjaj shoots outside, but stages every visual detail, from the vibrant textile backdrops to the eye-popping bespoke outfits, and his subjects are performers — like Cardi B and the Nigerian-born English rapper Afrikan Boy — he happens to know or be friendly with. For his camera, they pose with a winning innocence, like children very serious about playing dress up. Each image is framed in a custom shelving unit that holds columns and rows of tomato paste, mackerel or Jajjah Ginger Lemon tea in brightly colored cans.

Using products and patterns from North Africa — not to mention the graphic zing of the Moroccan flag — is a way for Hajjaj to reclaim representations of his home country. (The artist made the point himself in a 2019 profile by Siddhartha Mitter in The New York Times.) But it’s also a way of saying that what you see is what you get, and of encouraging you to take pleasure in that fact. I’ve never tried Jajjah Ginger Lemon Tea, so I don’t know whether it’s any good. But I’ve learned that it comes in a beautiful yellow tin with a mint-green lid. WILL HEINRICH 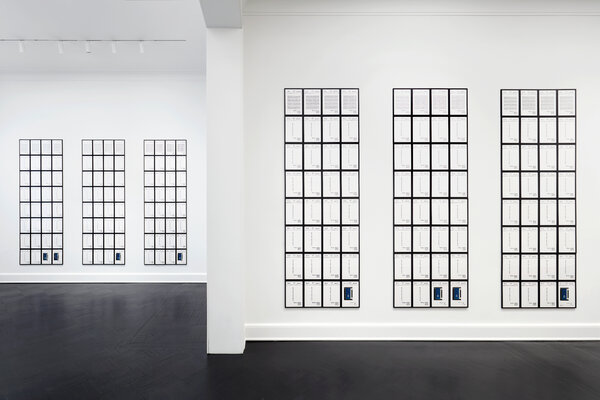 Though her works on paper often drew on rules and repetitions, and though she enjoyed a close friendship with Sol LeWitt during her years in New York, the German artist and composer Hanne Darboven (1941-2009) never quite fit the art academies’ intractable designation of “conceptual artist.” Her rambling, rhythmic installations of scribbles and calculations, accompanied by photographs and objects and often filling entire rooms, have as much human imperfection as mathematical accuracy — and can take on an epic grandeur as they accumulate historical and personal detail.

Five years after the Dia Art Foundation presented her magnum opus, “Kulturgeschichte 1880-1983,” New Yorkers can rediscover Darboven’s art at Petzel, which has filled the parlor floor of its uptown gallery with the installation “Europa 97,” made from 384 sheets of paper. On each day of 1997, Darboven headed a page with the date and the word “today.” Beneath, she repeated the digits of the day, month, and year; she usually wrote the numbers out in a single column, but at the start of each month she filled the page with a matrix of digits. When completed, each month’s drawings were arranged into a 4 x 8 grid, with the leftover spaces filled by a photograph of a German license plate — zoomed, notably, onto the blue-and-yellow European flag at the plate’s left.

From the title onward, Darboven analogizes the advancing numbers of “Europa 97” to another kind of progress: Pan-European democracy, five years on from the founding of the European Union in Maastricht. But this work never illustrates the year’s events or tips its political hand. On May 2, Tony Blair took power in Britain after 18 years of Conservative rule; Darboven simply recorded the date and repeated its digits. In early July, intense rainfall led to flooding across Poland and the Czech Republic; Darboven recorded the date, repeated its digits. The year 1997 could have been as dramatic as 1789 or as forgettable as, I don’t know, 1372. It doesn’t matter. This is an ahistoric look at history; it’s not the events that matter here, but the ideals.

In other projects, Darboven computed sums from a given date’s month, day and year, adding their digits together in a habitual, meditative personal arithmetic. But nothing is being calculated in “Europa 97.” She just writes the word “numbers,” and lets them keep ticking up: 10 4 9 7, 11 4 9 7, 12 4 9 7. … All that’s pictured is a humanist ideal — a promise she tried to embody in art, and saw embodied too in those yellow stars on a blue background. JASON FARAGO

“Losing my health insurance.” “Going back to prison.” “The consistency of goji berries.” “Not being ready to die.” These are some of the many fears recounted in Patty Chang’s new video installation, “Milk Debt.” Commissioned by 18th Street Arts Center in Santa Monica, Calif., “Milk Debt” features videos of women pumping breast milk while reciting crowdsourced lists of things that people are afraid of, along with scrolling texts of those fears. It unfolds on five screens, surrounding the viewer with a rhythmic, almost meditative litany of individual and collective anxiety.

Chang, who is based in Los Angeles, began her career in the late 1990s with provocative, absurd performances that often pushed the limits of her body (in 1998’s “Shaved [At a Loss],” she shaved her pubic hair while blindfolded). In 2005, she shifted toward making more essayistic films that use fact and fiction to explore the landscape of modern China and Western conceptions of Asia. Her eight-year project “Wandering Lake” blends those modes into an ecological and personal elegy.

“Milk Debt” is similarly haunting, although smaller in scope and more direct. Made during tumultuous times — including the Trump years, protests in Hong Kong, and the coronavirus pandemic — it feels responsive and specific, yet also universal. The pumping mothers give of themselves even as they take on an additional burden. By centering (but not romanticizing) them, Chang foregrounds the fundamental debt we owe to others, the interconnectedness of all life. And while many of the fears are acute and painful, there’s catharsis in gathering and naming them: a sharing of their weight and a symbolic release. JILLIAN STEINHAUER

Rachel Rossin, a self-taught digital tinkerer who began coding at age 8, has made art out of seemingly everything: deepfake videos, canaries trained to sing dubstep, electronics submerged in mineral oil. Her solo show “Boohoo Stamina,” at Magenta Plains, features 17 new paintings made this year and last. Rossin’s media of choice? Oil, acrylic, enamel and the occasional hologram fan. (Think spinning helicopter blades mounted with LED lights.) These items more often serve as flashy digital signage in back-alley electronics shops, but Rossin embeds them into her canvases, where they project digital images just inches away from the paint itself.

In a lesser artist’s hands, these pieces would come off as gimmicks. But Rossin’s take is strangely compelling. At times, her compositions evoke the visionary, spray-painted works of the Romanian-American artist Hedda Sterne, to terrific effect. At other times, Rossin somehow gets her brush marks to replicate the pixelated feel of virtual-reality worlds.

Largely abstract, the paintings nonetheless also feature enigmatic symbols drawn from the digital sphere. The staff of the Greek god Hermes appears in one hologram fan. Hazy, airbrushed catlike figures lurk in several works — paeans to the internet’s most beloved characters. Are memes, avatars and emojis Jungian archetypes, too? Rossin seems to think so. The paintings’ dreamlike qualities work well, as do the unusual ways they both invite and repel touch. Normally, any impulse we might have to run our hands across a painting’s thickly impastoed surface is quickly curbed by the anticipated scorn of a gallery attendant. Here, stray fingers might jam up a hologram fan, obstructing its projected image and earning a disciplinary whack from the fan’s blade. That threat imbues the show with a hum of cool, violent energy, in bracing contrast to the paintings’ balmier scenes. DAWN CHAN