An Iranian Instagram personality named Sahar Tabar made headlines a couple years ago after claiming she got 50 surgeries to look like Angelina Jolie, but today, she’s reportedly been arrested for crimes including youth corruption.

CNN reports that Tabar—whose given name is Fatemeh Kh, according to Iranian media—was arrested in Iran and is being accused of “promoting violence, illicit education, blasphemy, insulting the Islamic veil, spreading hatred and encouraging youth to commit corruption.”

Tabar drew a lot of attention in 2017 when she insisted she had “50 surgeries” to become an Angelina Jolie lookalike, leaving many to call her a “zombie Angelina” in the process, according to BBC’s Sebastian Usher. 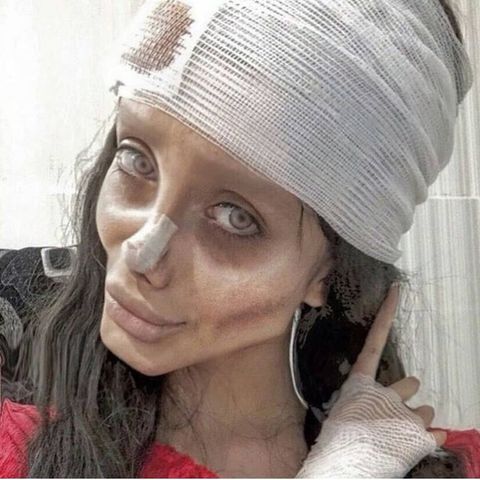 Thankfully, she later admitted she used makeup and Photoshop to create the creepy Instagram illusion.

“This is Photoshop and makeup,” she told a Russian media outlet called Sputnik. “Every time I publish a photo, I paint my face in an increasingly funny way. It is a way of expressing yourself, a kind of art. My fans know that this is not my real face.”

Can we all just collectively sigh in relief, because THANK GOODNESS for that. Still, Tabar, a self-admitted Angelina Jolie fan, has said she’s had “a nose job, enlarged mouth and liposuction.” Her intention was never to completely copy Angelina, though.

Tabar’s arrest comes after members of the public apparently made complaints, BBC reports. She’s not the first Iranian influencer to face legal ramifications. Amnesty International reports that while Instagram is not banned in Iran, Facebook, YouTube, and Twitter are all blocked.