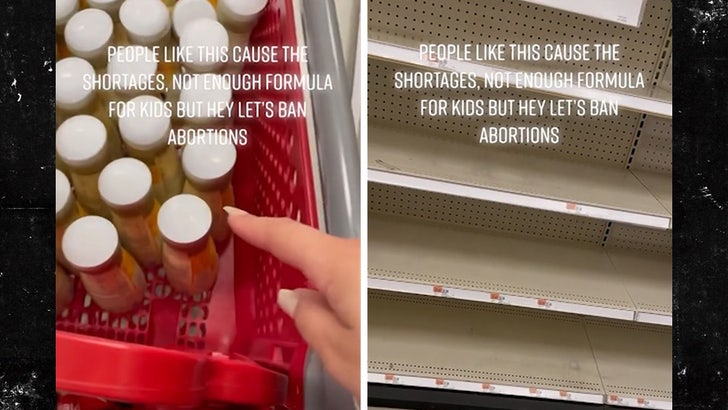 Tensions are running high among mothers needing baby formula in the United States … and that’s even more apparent in a new video making the rounds on social media.

Unclear where the clip was recorded, but you can see empty shelves — where formula should be — and one woman confronting another, accusing her of taking the remaining formula to sell at a higher price.

After the heated exchange, one walks away with all the formula, leaving the other high and dry. The woman’s brother posted the clip to social media, sharing the video along with her frustrations. She wrote, “People like this cause the shortages, not enough formula for kids but hey let’s ban abortions.”

Reports say the country has seen about a 40% drop in formula availability from last month, with some blaming supply chain issues caused by COVID as well as a formula product recall.

On Wednesday, President Biden invoked the Defense Production Act to help to alleviate the formula shortage … and instructed U.S. planes to pick up formula from other countries.