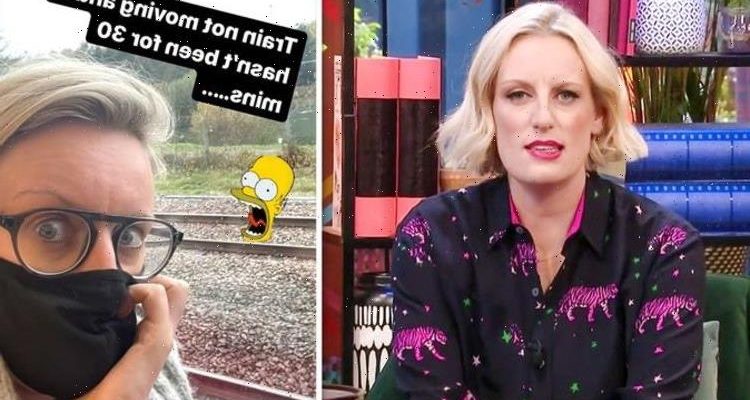 Steph McGovern shared updates on her turbulent travel experience to her Instagram Story today, where she revealed to her 53,800 followers that she was running late thanks to train delays. The Steph’s Packed Lunch presenter seemed panicked ahead of her live show, which airs at 12:30pm on Channel 4.

Steph, 39, posted a series of snaps to her story documenting her nightmare journey.

First, her original train was cancelled, forcing her to take the next one up and risk cutting it fine to get on air in time.

With a picture of the arrivals board in the train station, she wrote three hours ago: “My 06.33 train was cancelled…fingers crossed for this one!!”

Next, a relieved Steph posted a picture of herself seated on the next train up, captioning it: “Choo choo…Leeds here I come.”

However, her journey took a turn for the worst again when at 9:55am, she posted another worrying snap of herself sitting on the train somewhere in the countryside.

“Train not moving and it hasn’t been for 30 mins…” she penned.

The star boarded the 07:33 train to Harrogate via Leeds.

According to the LNER website, the train has been severely delayed, meaning Steph will not have long to make it to set in time for 12:30pm.

LNER reports: “07:33 London Kings Cross to Harrogate due 10:23 is being delayed between Grantham and Doncaster and is now expected to be 71 minutes late.

“This is due to damage to the overhead electric wires.”

At 10:32am Steph posted a follow-up snap, where she confirmed that the train was once again on the move.

She also added an alarm clock GIF, which read: “Will I make it?”

According to LNER, the train’s arrival time has now changed from 9:45 to 10:56am, meaning Steph will have approximately 90 minutes to travel from Leeds station to her film set in Leeds Dock, set up for filming, and prepare to start the live show.

John spoke emotively about the support he and his dance partner Johannes Radebe had been receiving from the LGBT community and passionately talked about representation.

“The Rumba was dedicated to those people who have fought for the liberty we’ve got today,” he told Steph.

The show offers a mixture of entertainment, food, news and an exciting variety of high-profile guests.

Before that, Steph was BBC Breakfast’s main business presenter between 2010 and 2019.

Steph’s Packed Lunch is set to air as scheduled at 12:30pm live today on Channel 4.