Remember “Blue’s Clues”? The Nick Jr. show that encouraged kids to look for clues and little blue paw prints left around a cartoon house by a blue puppy (appropriately named Blue) to help answer different questions? Yeah, that one. Well, the original host, Steve Burns — who played a character known only as Steve — has something to say.

The adorable kids show ran for six seasons between 1996 and 2006, teaching millions of children across the world. The show was so popular it was nominated for nine Daytime Emmys and was shown in 120 countries across the globe, even being translated into 15 different languages. In 2019, it returned to TV with its own spin-off, “Blue’s Clues & You!,” which updated the original concept for Nickelodeon.

Steve didn’t return for the reboot (though he did pop up in the premiere episode of “Blue’s Clues & You!”) and left the original series after four seasons when he handed over the hosting duties to his brother, Joe, in 2002. The episode, which was titled “Steve Goes To College,” saw the original host head off to — you guessed it — college and little Blue left clues around as they tried to work out all the things Steve would need for his new adventure.

Well, now Steve is speaking out about what happened all those years ago and why he seemingly left the series so abruptly in a touching message. 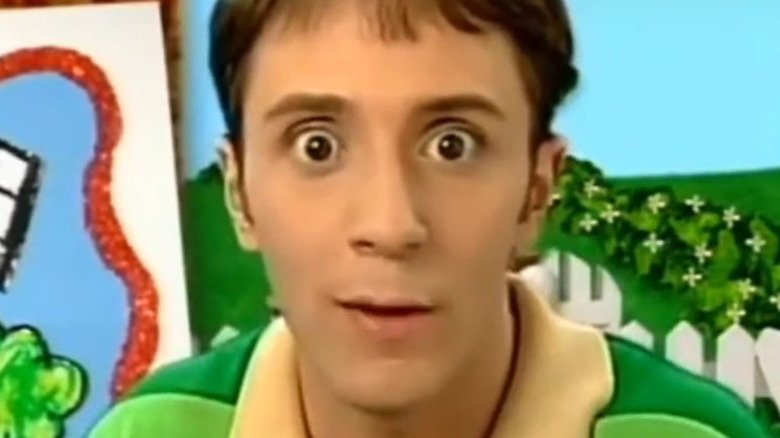 Steve Burns addressed his “Blue’s Clues” exit in a viral video shared to Nick Jr.’s Twitter account on September 7, in which he finally spoke about his leaving. He recounted a few of the staples of the kids show, before noting, “Then, one day, I was like, ‘Oh hey, guess what? Big news… I’m leaving.’ Can we just talk about that?” Steve admitted he realized it “was kind of abrupt” when he “just kind of got up and went to college.”

As for what he’s been up to since then, he explained a lot has changed since 2002 and he’d been up to a lot of the things he dreamed he’d do when spending his days with Blue. He told viewers, “Look at all you have done and all you have accomplished in all that time… it’s just so amazing, right?” reminding us grown-ups we now have student loans (thanks, Steve), jobs, and families of our own. “Some of that has been kind of hard, you know? I know you know.”

He continued, “I just wanted to say that after all these years I never forgot you. Ever. And I’m super glad we’re still friends…” Aww!

Adults were clearly thrilled to see their old friend again, with plenty getting emotional in response to the clip, which received more than 1 million likes in under 15 hours.

Now that was the catchup we didn’t even know we needed.