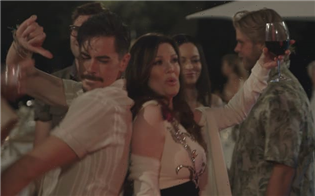 Vanderpump Rules returns in just a matter of weeks for Season 9.

There’s no question that the cast has grown up and hit new milestones. Have they matured? They think so.

This wild bunch is back, alongside a new cast member … and a couple of babies.

Take a look at this explosive trailer as it mercilessly contrasts how they see themselves from how they really are.

Brace yourself for fun, for conflicts, for popping the biggest bottles, and for endless antics and accusations.

The show would truly not exist without the titular star, Lisa Vanderpump, who of course returns for Season 9.

And you’ll recognize plenty of other returning stars.

Brock Davies is joining the cast (by way of being Scheana’s fiance). And … do the babies count as cast members?

“Becoming a mother did something to me,” Lala Kent says in reflection during the trailer.

The mother of 6-month-old Ocean assesses: “I would say I’m pretty grown.”

The trailer then immediately transitions to Lala yelling at a castmate: “What the f–k is wrong with you?”

James Kennedy is expressing similar claims of growth, noting that he has “done so much self-reflecting” since Season 8.

Of course, the teaser then shows him yelling at his fiance, Raquel Leviss.

“First and foremost, it’s my body,” Raquel is shown telling the dramatic DJ.

He counters: “I’m the one that has to look at your face.”

We also see him tell her and Charli Burnett: “Sorry you guys are so dumb you can’t figure it out.” Dude, no.

Only after Raquel storms out of the room does James have the self-awareness to ask: “Was that a bit much?”

Scheana gushes over her baby, Summer Moon Honey, claiming that she is the “happiest she’s ever been.”

Yes, that is what a woman named her actual human baby. And Lala named hers Ocean. Make it stop.

Scheana’s fiance starts feeling the fifth degree when he becomes the topic of gossip.

Lala tells Katie that he has two kids, presumably back home in Australia, to whom he “hasn’t spoken” in “four years.”

That would be a long time to go without speaking to adult children, but a massive amount of time to be incommunicado with younger kids.

But Katie has her hands full, dealing with Tom (her husband) and Tom (not her husband) who are undertaking the task of opening a bar together.

“Listen to my f—king husband’s ideas!” Katie screeches at one point.

She tells Tom Sandoval to simply “get the f–k over it” elsewhere in the teaser.

“F–k you for making me feel like a f–king psychopath,” Tom (not her husband) snaps back at her.

Later, Lala tells Tom Schwartz: “I can’t understand you. Oh, it’s cause Sandoval’s dick is in your mouth.”

Vanderpump Rules returns with Season 9 on Tuesday, September 28, at 9pm.