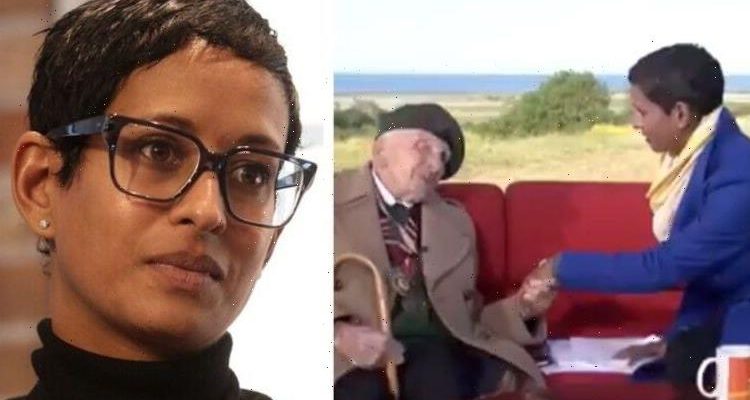 Mournful broadcaster Naga Munchetty had interviewed Harry Billinge, a D-Day war hero, in the past for BBC Breakfast – and co-star Dan Walker, who is set to leave the BBC in just two weeks, posted video footage of the episode in remembrance. Viewers could see Harry modestly assure Naga: “I’m no hero” – but the tearful presenter, like many others, clearly thought otherwise.

“How sad to hear that D-Day veteran Harry Billinge has died at the age of 96,” Dan mused on his Twitter account.

“He gave one of the most moving and memorable interviews about friends he lost in battle & heroism. May he finally rest in peace.”

Naga reacted to Dan’s tribute with a broken heart emoji, reposting the video clip to her almost 280,000 followers alongside the sentiment: “Incredibly sad news.

“Harry was a true gentleman and a Hero. X,” she added.

The 46-year-old had struggled not to burst into tears during the 75th D-Day anniversary interview with Harry back in 2019.

On Alan Carr’s podcast Life’s A Beach, she also recalled her conversations with war veterans in France and described the visit as the most unforgettable trip of her life.

She confessed that there was trauma involved due to seeing the heroes “relive it”, explaining: “You see those images in their eyes and you see the fear and the emotion.

“I did choke,” she admitted of her chat with the then 93-year-old on the BBC Breakfast sofa, and her voice audibly cracked after shaking the brave survivor’s hand.

Veteran Harry revealed all in the interview about his harrowing experiences in France, while battling at the site of the D-Day Landings.

Yet, Harry had made it clear he was not seeking praise as a survivor.

“Don’t thank me and say I was a hero,” he modestly insisted to Naga at the time.

“All the heroes are dead and I’ll never forget them as long as I live.”

He recounted: “When I landed, it was hell. I’ve never seen anything like it in my life.

“You had the ships firing over your head and the Germans firing at you from inland.

“88 millimetre guns they used, which would blow you off the face of the earth.”

He winced as he recalled how one of his fellow soldier friends had died in his arms in a field in Caen.

“He had a three week old baby called Nieve,” he recalled, “and they took me to the 60th anniversary to find out where he was buried”.

He added that Normandy veterans had love for each other that went “beyond the love of women”.

If you were “in a hole in the ground with a bloke,” Harry reasoned, “you got to know him”.

“My generation saved the world and I’ll never forget any of them,” he concluded proudly, with a tinge of grief when commemorating all the lives that had been lost.