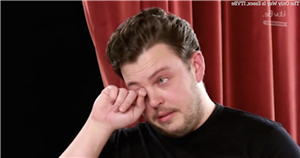 TOWIE star Diags became emotional as he opened up about his brother’s 50-50 chance of survival following an operation to remove a severe brain aneurysm.

At the start of this month, it was announced that Diags' brother was rushed into hospital with a brain aneurysm and had to undergo an eight-hour surgery to save his life.

Due to Covid restrictions, his younger sibling had to go into surgery on his own after suffering a brain aneurysm and two bleeds on the brain.

The reality star, 29, otherwise known as James Bennewith, spoke candidly with his best friend Chloe Sims on TOWIE on Sunday night about the struggles his brother Jack has been going through over the past few months.

Get exclusive celebrity stories and fabulous photoshoots straight to your inbox with OK's daily newsletter. You can sign up at the top of the page.

“The operation went well; he had the aneurysm removed and he had a malformation of blood vessels on his brain and he had them removed.

“He’s speaking fine now, he’s got his speech back,” to which Chloe said: “Oh thank God.”

As Diags became emotional, Chloe was quick to reassure him, admitting: “Don’t cry – ‘cause you know I’ll cry back!”

He continued: “I took for granted spending time with my brother where I’d pass it off … do you know what I mean? “Don’t take, can’t take it for granted, if it’s your family especially.”

As the pair started to well up and choke back a tear, Chloe comforted her best pal, and confessed: “Honestly Diags, I know we joke around all the time but I love you.

“When I knew you were going through that I thought f**k if it were me and one of my siblings I would fall apart, but you were so strong, and obviously I’m so grateful that Jack’s alright.”

Wiping away a tear from his cheek, Diags added: “When you realise you might lose them it’s proper f**king scary but the worst of it is over, so it’s just his recovery now.

The ITVBe star celebrated his brother's return home from hospital after his successful surgery with a post on Instagram celebrating his strength and determination.

Alongside a snap of the two of them, Diags wrote: “He’s coming back home, after suffering a brain aneurysm and two bleeds on the brain … then having to have a brain operation for eight and a half hours, all by himself as Covid means you can’t even visit the ward!

“He’s finally coming home, so here’s to the strongest geezer I know my brother @jackbennewith1 …”

“Thank you to everyone at Addenbrookes Hospital for saving my brother and thank you to @georgina_kellyx for taking him to hospital that day!”

He concluded by asking his 265,000 followers to make sure they get checked out at the doctors if something doesn’t feel quite right.

“If you ever feel unwell or being sick, headaches, stiff neck please go get checked out because you never know what it might be.”

Fans were quick to pass on their well wishes to the Essex family following the traumatic event with many of his co-stars chiming in.

Mario Falcone commented: “Wish him a speedy recovery mate”, while James Argent wrote: “We love you jack” with a heart emoji.

Demi and Frankie Sims also passed on positive thoughts to the family adding: "@Glad he’s okay Diags!!!” and “So glad his okay wishing you a speedy recovery @jackbennewith1.”