Before the idea of fame ever occurred to her, TikToker Jackie James knew she was an activist. This revelation happened around fifth grade, when she started to process what it meant to be a young Black woman and the daughter of an immigrant family. Her mother arrived from South Sudan and planted roots in the not-so-diverse Fargo, North Dakota, leaving James to realize from early on she’d have to understand race, code-switching, and living between worlds. When she saw Skai Jackson as Zuri on Disney Channel’s Jessie, a young lead who looked like her, something clicked in James: Not only would she be an activist, she would be a star.

James, who also goes by Jax, recounts her origin story over Zoom on a Friday morning. It’s barely 9 a.m., but in the midst of full-day theatre rehearsals, she prefers the early start. In just days, she’ll make her debut as the intelligent, resilient, good-humored Ethel McCormack in her high school’s production of Footloose.

“Performing is more of a form of art, it’s what you love to do, being able to exist as something else,” says James, whose dream roles include Shego in Kim Possible and Regina George in the Mean Girls musical. “But for activism, it feels like, as a human, it’s an obligation to care about and help other people — educating them, helping them learn. They’re two different things, but they really do play into each other a lot of times.”

That much is evident in James’ countless viral TikToks as @fatraco0n, many of which spotlight topics ranging from Black Lives Matter to intersectional feminism. James, 17, is part of the next vanguard of Gen Zers using internet fame to call attention to centuries of systemic oppression. But she’s navigating these uncharted, sometimes tumultuous waters by herself, without a team of professionals or an equally famous family to catch her if she falls. 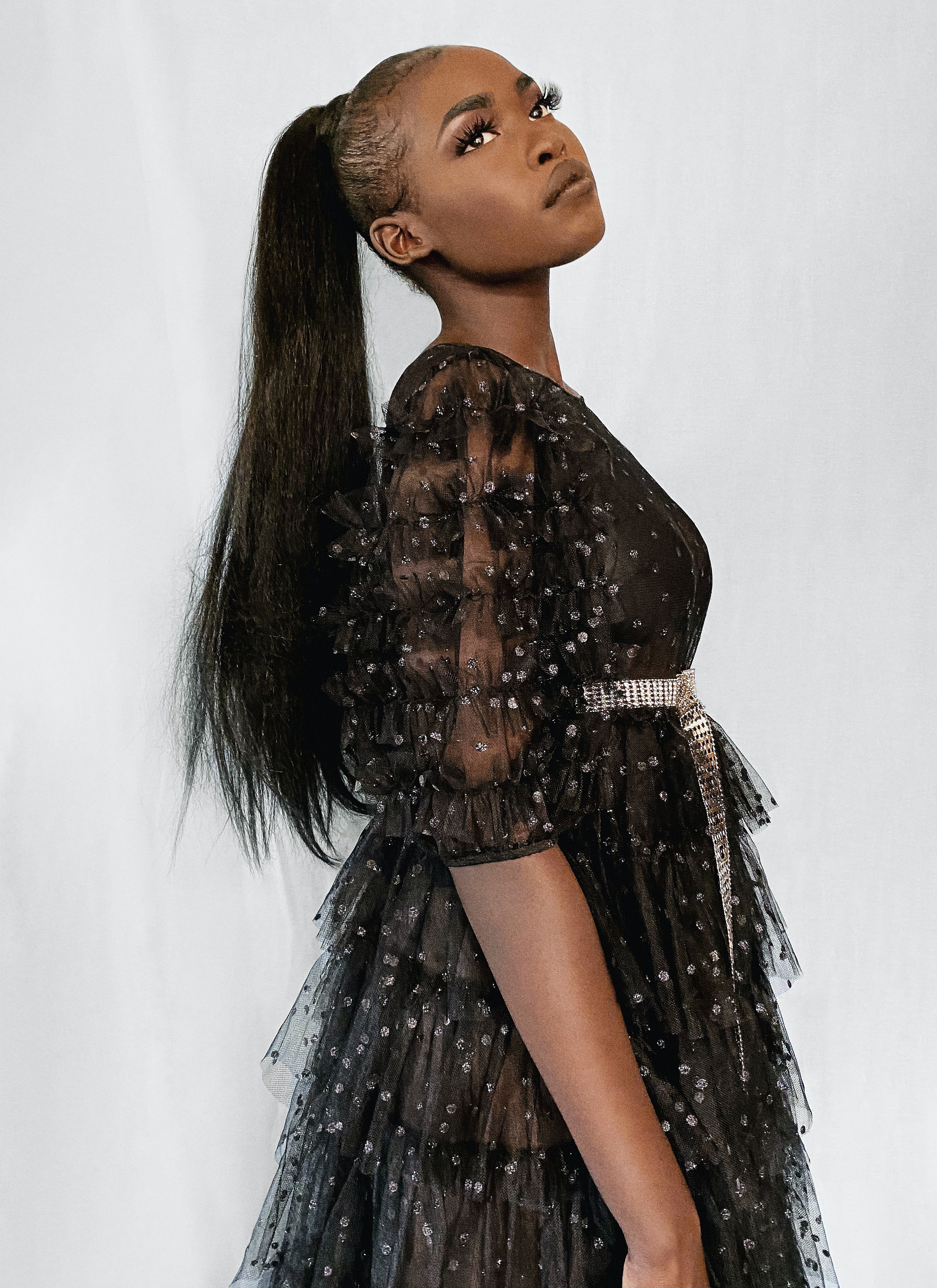 Even before James, a rising senior, became TikTok famous, she mobilized others with activism offline. Working with one of her high school counselors, she successfully launched an initiative called the People’s Project, meant to spark conversation and connection between students who might have never talked otherwise. Members would meet during an open period to discuss mental illness, Black Lives Matter, feminism, and more, and they later published their thoughts in a newsletter. This past school year, when her U.S. History class learned about Thanksgiving, James raised her hand and stated, “Right. It was genocide, though.”

The charisma and quick wit that brought her classmates together have also reeled in more than 2.1 million TikTok followers since March 2020. While many TikTokers treat their videos as extreme productions, James has a much more no-frills, DIY approach to her content. While we talk, I catch a glimpse of her two brown bedroom doors behind her in tons of her TikToks. Fans will quickly recognize the living room couch she films on and, of course, the quintessential Jax bathroom mirror selfie video. It’s like you’re a guest in her home. When she sees something on social media or in the news that sparks a desire to say something, she’ll speak her mind on video right then and there.

“It’s just really from the brain,” she says of her videos, crediting her experience memorizing monologues for high school musical theatre productions. “I try and make videos like I’m talking to a friend, because that’s the best way to relate and connect with your followers, to treat them as what they are: just people who like your content and personality.” 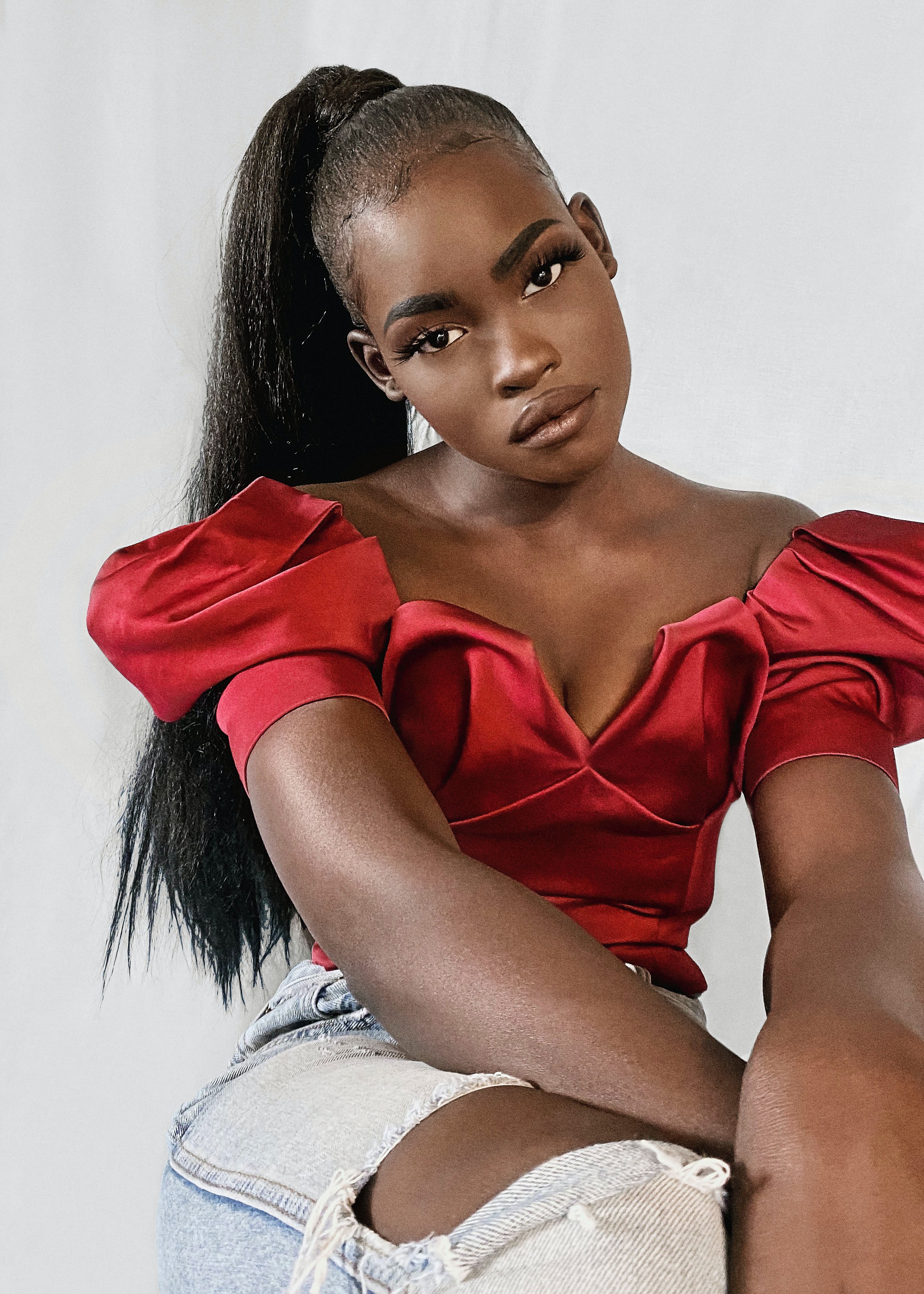 Her millions of viewers, whom she endearingly calls “sport,” are a relatively new — and unexpected — development. She downloaded TikTok in March 2020, just as the spread of COVID-19 ramped up in the U.S., and she ended that month with around 100,000 followers. Her first viral video, a satirical one about conservative social media personality Kaitlin Bennett and why you shouldn’t be a transphobe, underscores TikTok as prime ground for darker strains of activist humor to thrive. For James, it’s sometimes easier to confront the dangers of being a Black person in the world with a dash of wit than to break down the complex details while she lives them.

“I feel like most of it really starts with the stigma of mental health,” she says of this darker humor. “Coping could be self-deprecating jokes or satire, just being able to handle it in ways other than violence and anger. So [young people] come onto platforms and they make jokes about it, just to feel more comfortable with talking about it.”

James may have carved out her own space on TikTok where she can be funny while speaking on a variety of issues, but she’s still trying to figure out how to be this new brand of celebrity — and what to say when a joke won’t strike the right tone. There isn’t an abundant team of managers, agents, and publicists calculating her every move or crafting her captions. A slew of other TikTokers invading mainstream avenues of entertainment have notably shied away from talking about politics or social justice to avoid controversy. James eagerly faces those topics head on, often quite literally. She’ll fearlessly turn offensive comments into TikTok material or openly refute creators spreading false information. Fans have dubbed her their Katniss from The Hunger Games.

She did hesitate to post following George Floyd’s death, until May 27, when she addressed the tragedy in a video that understandably skewed more somber than her usual humorous. Despite having been vocal about structural racism and other human rights issues long before recent protests, she struggled with what to say, fearing her viewers suddenly expected her to be the go-to spokesperson for these matters. “The idea of something like that happening to somebody I know or family was really hard, and it was really hard to speak about it in public or online or to thousands of people,” she says. Her feelings were compounded by the fact that she lives 15 minutes away from the Minnesota border. “The expectation felt really high. I don’t know everything, and it was such a tender wound at the time, so it seemed like if you said one thing wrong, then things could come crumbling down. But how you feel about it will never be wrong. Your emotions are valid.” 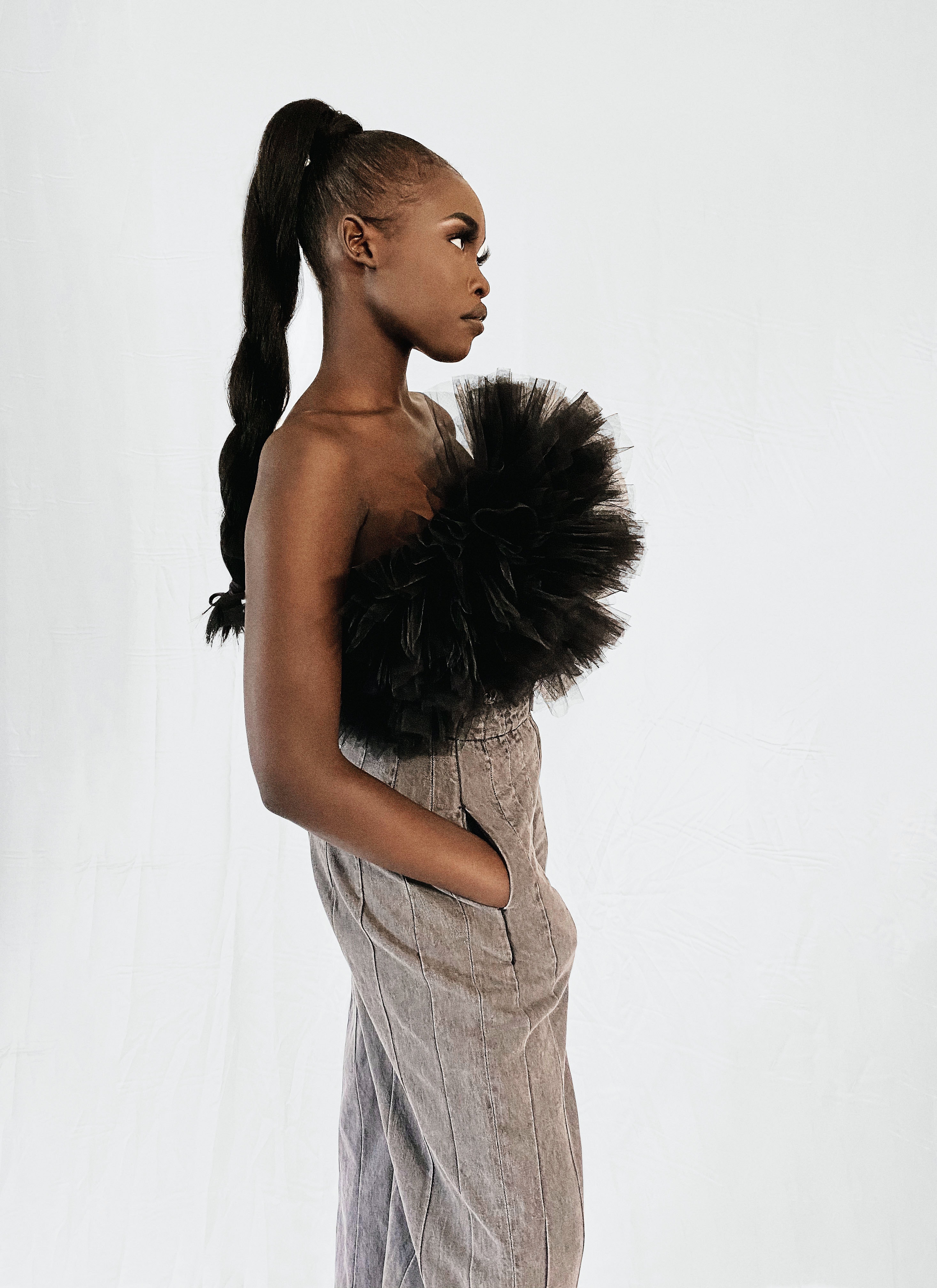 Being a young person with the keys to a huge platform means James has to maneuver through the politics of cancel culture — something even seasoned celebrities fumble through. In June, she tweeted in support of Skai Jackson exposing others’ past racist actions online, and she remains unafraid to put offensive TikTokers on blast. In recent months, however, James clarified her stance on cancel culture, urging followers to hold people accountable but allow them space to grow, and not to dox anyone. Now, she feels it’s better not to get caught up in the turbulence of someone being canceled.

“Sometimes people expect influencers to be able to talk about things right after they happen. Let’s just say somebody gets canceled and you’re expected to speak on it right away. People are just waiting for your opinion on it and how you feel and what your relationship is with them now,” she says. “You don’t always have to say something. You can have an opinion, but it doesn’t always have to be public.”

After all, social media is an incubator for the most superficial stances and performative types of activism. “That audio [on TikTok] that’s getting really popular about arresting the cops who killed Breonna Taylor, at first that was really great to see,” she says. “Then, it got to this point where it was like, ‘OK, you’re using the audio, but you’ve never talked about Black Lives Matter before. There are no URLs in your bio. There are no petitions or anything, and so what is the goal right now?’" 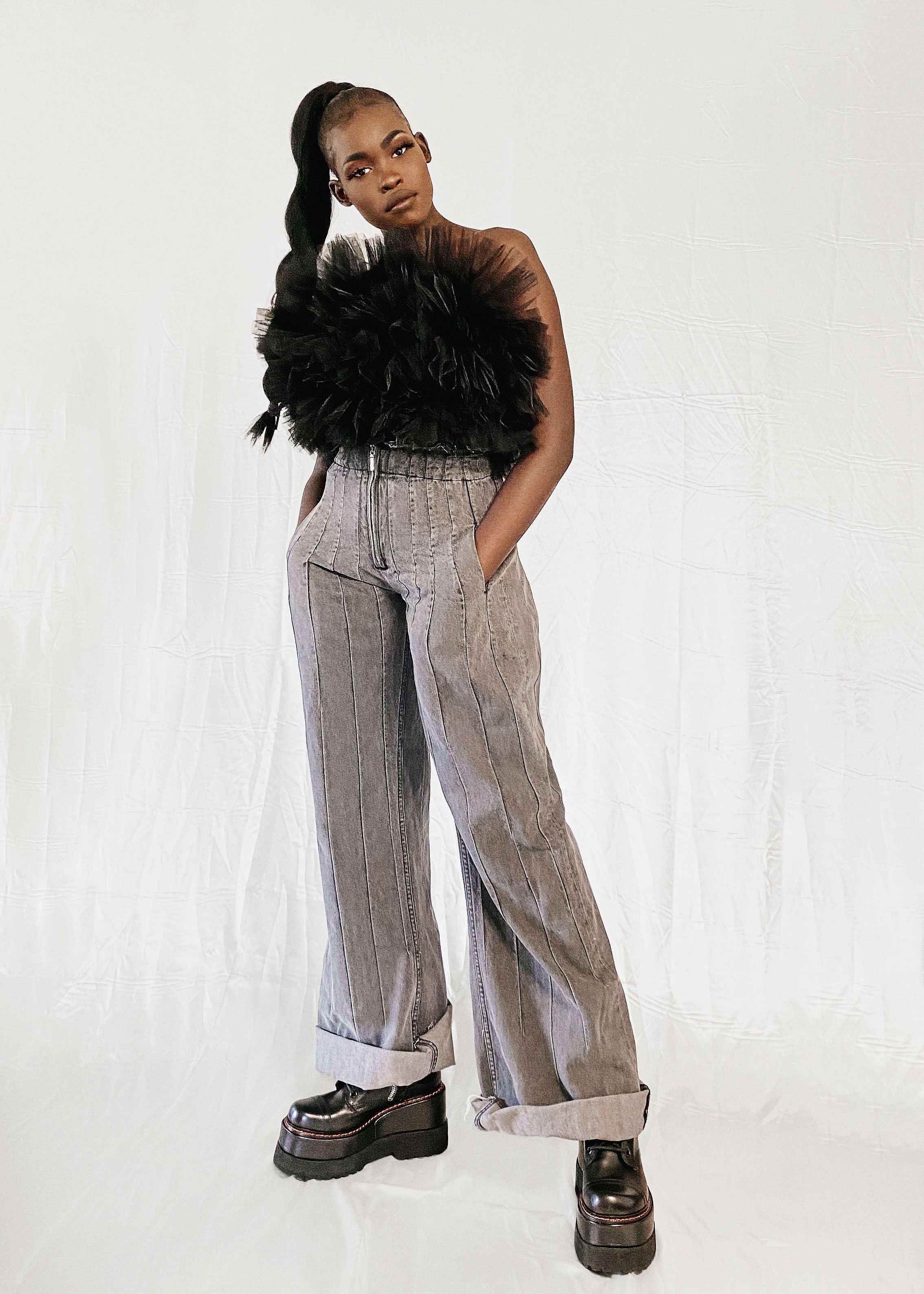 James’ dedication to bolstering must-have conversations on TikTok has not only garnered a devoted fan base, but has also caught Hollywood’s attention. In June, Riverdale’s Lili Reinhart interviewed James about her activism on Instagram Live. In the 10-minute clip, James drove home the idea that recent conversations surrounding racial justice aren’t about white versus Black — they’re about valuing another human’s life. “As a white person, you can’t actually feel what a Black person is going through," she said. “You can’t really fully understand what’s going on, but you can listen."

Right now, James has her sights set on the future, with performing dreams bigger than 15-second videos. Whether or not her unconventional path leads her to conventional fame is beyond her; a perfect plan isn’t all that important. James’ stage is everywhere, and she’s going to give you something to listen to. That’s always been and will continue to be the goal, sport. “Every time I do talk about activism, there are going to be people who think it’s too much. But I think we need too much right now,” James says. “If you can’t use your voice [on TikTok], then this isn’t somewhere that you should be. Because helping people will always be the main goal. Always.”