In its Season 3 finale, Riverdale finally cleared up the mystery of the Gargoyle King and even the lingering threat of the Black Hood, but there is still one dangerous entity on the loose: The Farm. Although the cult did not take center stage until the third season of the show, it was actually first mentioned all the way back in Season 1, when Polly mentioned that she and Jason Blossom were planning to run away from Riverdale to start a new life on a farm. A new detail about Polly and The Farm on Riverdale finally clears up the question of how Pollu even found out about the cult in the first place.

Prior to Jason’s death at the very beginning of Riverdale, Polly had already known about The Farm and made plans to run off to the cult to raise her babies with Jason away from their spiteful parents. After a brief stay at the Sisters of Quiet Mercy, Polly finally gets her wish and joins The Farm for the bulk of Season 2, raising her twins Juniper and Dagwood there. In Season 3, Polly is key to bringing The Farm into Riverdale, luring her mom to join after learning the truth about Hal and proving herself to be one of the cult’s most loyal and obedient members. But how did Polly first learn about The Farm? Well, a new issue from the Riverdale tie-in comic books revealed that Evelyn Evernever actually encountered Polly back before the events of the TV show.

In a couple panels from the recent Riverdale comic issue posted on Reddit, fans see Polly going to the drive-in while she is dating the still-alive Jason, and that is where she runs into Evelyn, who is asking if she needs a friend and holding flyers for The Farm. 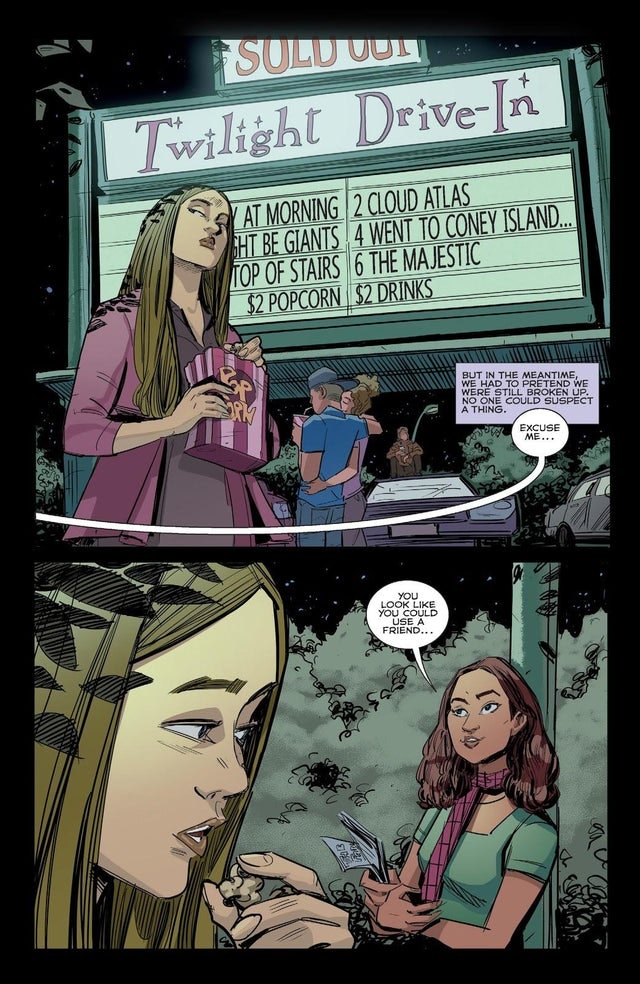 These Riverdale tie-in comics, which debuted a couple months after the CW series premiered, are considered canonical with the TV show, as they are primarily written by showrunner Roberto Aguirre-Sacasa and the TV show’s writing staff. So what that means is, Evelyn Evernever was secretly lurking around Riverdale recruiting Farmies since before Season 1 even began. And since Polly was desperately searching for a way to keep her low-key incestuous relationship with Jason somewhere far away from Riverdale, it is no wonder why she was quick to jump on board Evelyn’s Farm life.

As for where we are at with The Farm right now, the Season 3 finale ended with Betty discovering the cult was actually a front for Edgar Evernever’s secret organ-harvesting operation, but before she could do anything about it, The Farm skipped town with all of its followers in tow — including Polly, Alice, Fangs, and Principal Weatherbee. Only Kevin was left behind to inform the others that The Farm was gone for good.

But thankfully, it sounds like The Farm storyline will be resolved pretty quickly when Season 4 premieres this fall. Roberto Aguirre-Sacasa revealed at Comic-Con that The Farm story will be wrapped up in Episode 3 of the new season, which hopefully means that Betty and her newfound FBI agent half-brother will save Alice and Polly. Let’s just hope that Polly isn’t too hypnotized to leave Edgar’s side.

Riverdale Season 4 will premiere on the CW on Oct. 9.

Brody Jenner and Briana Jungwirth Split: Is She Engaged to Someone Else?
TV & Movies

Palace Responds to Prince Harry's Remarks on Voting, Calling Any Comments 'Personal'
We and our partners use cookies on this site to improve our service, perform analytics, personalize advertising, measure advertising performance, and remember website preferences.Ok