This week’s Evian Championship is the start of an important tournament swing for the L.P.G.A. as it heads to Europe for back-to-back majors.

Evian has been billed as the fifth major since becoming an L.P.G.A. championship six years ago, but this year the picturesque event in Évian-les-Bains, France, will actually precede the AIG Women’s British Open, set for one week later in Milton Keynes, England.

The tournament has also moved from September to July on the tour’s schedule, allowing for warmer, drier weather on a rolling course with severely undulating greens and formidably thick rough.

Angela Stanford, in her 18th year on the L.P.G.A. tour, won her first major and sixth career tournament at the 2018 Evian Championship to snap a six-year winless drought. She hopes to defend her title this week.

But Stanford will have plenty of challengers as Stacy Lewis and Gerina Piller return after delivering their first children in 2018. Lewis, with 12 career wins, finished third two weeks ago at the Marathon Classic. Piller is winless on the L.P.G.A. tour.

Lexi Thompson, with one win in 2019, is seeking victory at Evian after three top-10 finishes during her last six starts at this event, including second in 2015.

Thompson, ranked No. 3 in the world, has seven top-10 finishes this year, including five finishes in the top three, with a third at the ANA Inspiration and a tie for second at the United States Women’s Open, both major championships. Thompson’s only major win has been the 2014 Kraft Nabisco Championship.

The tour has had 15 different individual winners after 19 events this year, with Jin Young Ko, the top-ranked Sung Hyun Park and Sei Young Kim, all from South Korea, and Brooke Henderson of Canada each winning two.

Here are some players to watch this week at Evian Resort Golf Club. 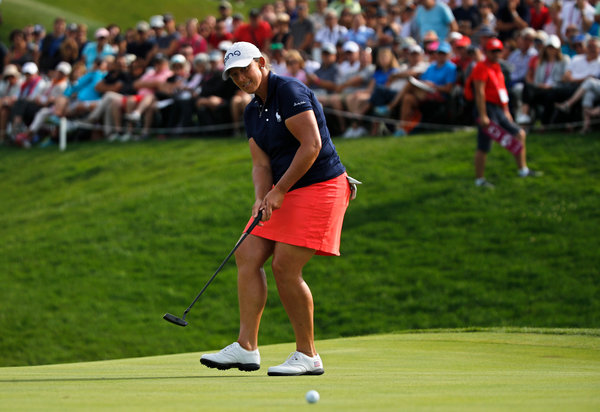 Stanford, ranked No. 44 in the world entering the Evian, has dealt with a fractured rib in a tough season. She has missed the cut at five tournaments this year, posted no top-10s and recorded two season-best ties for 23rd, but then again, nobody picked Stanford to win the Evian in 2018.

“I just like all odds against me because I’m a fighter and I grind it out,” said Stanford, a six-time winner. “I’ve actually won half of my tournaments outside the United States.”

For that reason, winning a major in France last year did not come as a surprise to Stanford, but she was relieved that it finally happened.

“I think people measure your career in major championships, and I always felt like I could win one,” Stanford said. “Thankfully, I got one at the Evian Championship.”

If anyone has figured out how to effectively navigate Evian Resort Golf Club, Ko has emerged as a regular contender at this event. She has recorded five top-10 finishes in the last six years at Evian, with a win in 2015.

Ko, of New Zealand, is ranked No. 21 in the world and is still winless this season in spite of three top-10 finishes. She has won 15 tournaments in her career, and she will try to add a second Evian trophy and a third major championship to her record.

“I won my first major at Evian, so I feel the support whenever I return to places where I have a lot of good memories and where I’ve had success,” Ko said.

Kirk of Australia hopes three is the charm when she returns to the Evian this year after tying for 10th in 2018 and third in 2017. The three-time tournament winner, ranked 94th in the world, recorded her last win in 2017 and is the type of patient long hitter who could see winning her first major in France.

She has posted one top-10 and five top-20 finishes this year, but has also missed the cut at five tournaments. A good week on a course where she has played well in recent years could turn things around.

“The golf course is not as demanding as some of the other majors we play, but it requires a lot of strategic thinking, and you have to be smart with where you place it off the tee and where to hit it on those greens,” Kirk said.

This L.P.G.A. Hall of Famer seems to have a fondness for Evian, with three top-10 finishes in the last six years, including a tie for eighth in 2018. Park won here in 2012 before the event became a major championship and a win this week would make Park an L.P.G.A. Super Career Grand Slam winner — with wins at every major available during her career.

Entering Evian ranked No. 5 in the world, the player from South Korea hopes to build on her record of 19 career wins and seven majors. She also would like to post a win this season to improve on her four top-10 finishes with two ties for second.

“Every time I play in the majors, I still feel like I have a win left in me,” she said. “I just need to get something going.”

Law, ranked No. 24 in the world, joins France’s Céline Boutier as the only tournament winners from Europe this season on the L.P.G.A. tour. This third-year tour member from Stockport, England, earned her first title in late May three weeks after posting a tie for second.

A seven-time collegiate tournament winner while at the University of California, Los Angeles, Law returns to Evian for her fourth career start. She is also a two-time English Women’s Amateur Champion and 2014 Curtis Cup team member.

“Playing the course during the summer this year should be less wet than we’ve played it in previous years, but I know that when you putt well at Evian, you can post a good number,” she said.