The electronic music duo have shared a number of TikToks poking fun at a range of conspiracy theories about what the band’s been up to.

After two years, The Chainsmokers have returned! The hit-making pair announced their return after a hiatus with a comedic video on January 13, but the duo, consisting of Alex Pall and Drew Taggart, couldn’t resist calling out a few fans who came up with a a couple of creative conspiracy theories about where they’d been over the past two years. Both the real Chainsmokers and a couple of actors had amazing reactions to the theories.

Why would we mess with perfection? #duet @SUGENE ✨?

In the video announcing their return, Alex and Drew did hire two actors that look a little bit like them to play them, before making an appearance themselves at the end. Besides having the fake Chainsmokers star in the video, the two actors also posted a series of reaction videos on TikTok, responding to different conspiracies. One TikToker made a jokey conspiracy about the pair making serious body modifications. “Alex and Andrew basically underwent a lot of plastic surgery. They look completely different!” she said, as the pair of imposters looked surprised. They did write off the suggestion in their comment though: “Why would we mess with perfection?”

The actors playing The Chainsmokers also hilariously responded to another clip, where a fan was talking about celebrities being replaced by doppelgängers (mentioning the much-debunked conspiracies about Paul McCartney and Avril Lavigne). She suggested that the next celebrity who will be “replaced” by a look-alike would be The Chainsmokers. The actors looked similarly surprised, and the caption also hilariously wrote off the possibility. “This conspiracy theory makes no sense,” they wrote in the caption. 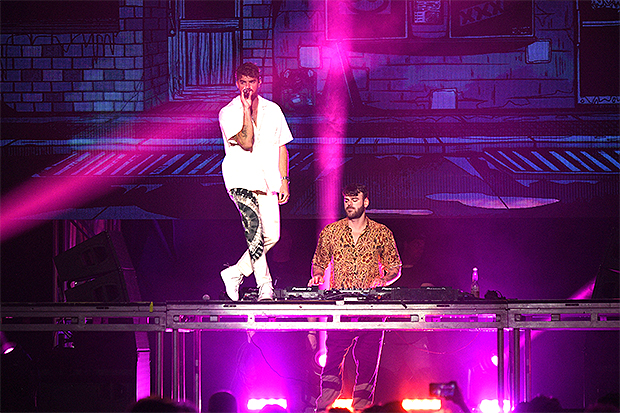 Since the series of videos with the actors, the real life Alex and Drew have since made their own share of videos reacting to conspiracies and letting fans in on the joke. After their return announcement, the pair posted a clip where the real Chainsmokers meet their doppelgängers. “When you meet 2 random white dudes that look like The Chainsmokers,” they wrote in the video. The real life pair also addressed the plastic surgery rumors with a clip of them lip-syncing to their new song “High,” in front of a headline about the conspiracy. “This has gone too far,” the band wrote in the comment.