The Batman has been confirmed to take place in a separate world to the main Worlds of DC timeline, like Joaquin Phoenix’s Joker – but that doesn’t mean a surprising DC crossover isn’t in store.

Earlier this month, it was revealed that DC had pulled the plug (for now) on New Gods and Aquaman spin-off The Trench. It was reportedly down to the fact that there wasn’t a “natural spot” on DC’s packed slate over the coming years to continue developing the two movies.

That future includes The Flash bringing the multiverse into the Worlds of DC, much like the Arrowverse has already introduced for the TV shows. Most of the upcoming movies will interconnect in the same world and timeline, except for The Batman.

The Hollywood Reporter confirmed that Robert Pattinson’s Batman will live on an alternate Earth known as Earth-2.

Like Joker, this seemingly rules out crossovers with the likes of Wonder Woman and Aquaman, but as Inverse points out, there is a DC hero already living on Earth-2.

Stargirl made her Arrowverse debut at the end of Crisis on Infinite Earths where it was revealed that she lived on Earth-2.

It could well be that DC sees the Arrowverse and the movies universe as two separate things, meaning that the Earth-2 that R-Battz lives on is a different one to Stargirl’s Earth-2 and ruling out a crossover.

However, earlier in Crisis on Infinite Earths, we actually got a meeting of the two Flashs – Grant Gustin from the Arrowverse and Ezra Miller from the Worlds of DC – so there is a precedent for the heroes sharing the same world.

With DC’s overall plan to introduce the multiverse, it would make sense to incorporate the Arrowverse into the movies universe.

That could well lead to dedicated DC fans going back over the various shows and movies to point out every inaccuracy. With the Flash messing with time in his solo movie though, it’d be an easy enough retcon for the whole universe to have been altered forever, or something along those lines. 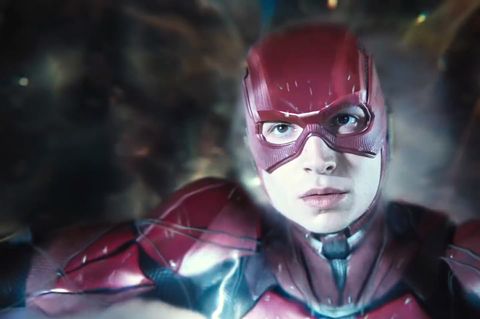 As far as we know, The Batman takes place in contemporary Gotham City and not in the past like Joker. That means the timelines would match up for a Stargirl crossover, even if it was just a nod to other superheroes being out in the world.

If the Worlds of DC and Arrowverse were uniting though, DC would have to be careful to avoid continuity issues. Stargirl is the leader of the Justice Society of America and we know that group of heroes will also be in Black Adam (albeit potentially a past version of them).

There’s also the fact that Stargirl and The Batman‘s tones don’t quite match from what we know of the upcoming movie. From the DC FanDome teaser, The Batman appears to take place in a dark and gritty world, whereas Stargirl might be the peppiest of all the entire Arrowverse shows.

Given these issues, it might be cleaner for DC to keep the two worlds completely separate, avoiding any continuity issues. But it is an exciting thought that all DC properties could unite into one epic universe that could well rival anything Marvel has in store for the MCU.