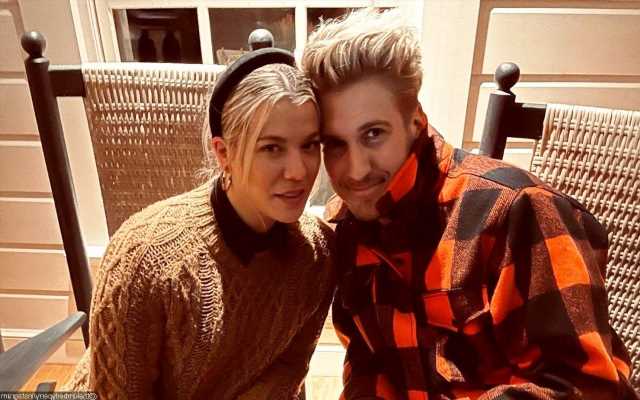 The ‘If I Die Young’ hitmaker, who was previously married to MLB star J.P. Arencibia, divulges that she tied the knot with Costello at midnight back in June.

AceShowbiz –Kimberly Perry has become a married woman once again. Taking to social media, the vocalist of The Band Perry revealed that she secretly tied the knot with her partner Johnny Costello in June.

On Saturday, December 18, the 38-year-old made use of Instagram to share a picture of her smiling lovingly at her now-husband under red lighting. In the caption, she first wrote, “Wishing everyone a very MARRIED Christmas. Today my love, @juannycostello, and I are celebrating 6 months since ‘I do!’ “

Perry went on to detail their nuptials. “On June 17th we hit the road from LA to Las Vegas in a black corvette and got married at midnight,” she noted. “It was wild and wonderful and reminded me all over again that God is the most glorious creator and the master of the most beautiful blueprint for our lives! I love you Johnny and can’t wait for forever…. [love] Mrs. Costello.”

Also sharing the happy news was Costello on his own Instagram page. Posting an image of the two hugging each other, he exclaimed, “YALL, WE GOT MARRIED!!!!” He then added, “Happiest Six Months of Marriage @thekimberlyperry . To starting everyday with a prayer and ending it with a kiss. I Love YOU!!”

Perry was previously married to MLB star J.P. Arencibia. However, she filed for divorce from him in May 2018 and cited irreconcilable differences as the reason for their separation.

Perry sang about her divorce on The Band Perry’s 2019 track, “The Good Life”. In the song, she hints at infidelity within the marriage. The singer herself once opened up about the meaning of the song via Instagram.

“THE GOOD LIFE is a story about the infidelity I experienced,” she penned at the time. “I want you to know that this song was written during a toxic and incredibly difficult time in my life, but I’m singing it to you now with the voice of a woman who has completely regained a strong sense of self, rebuilt her womanhood, and is grateful to have learned so much.”