WIMBLEDON, England — Anna Tatishvili’s tennis comeback looked merciless even before she took the court last month. After losing 19 months of her career to a persistent ankle injury, she returned at the French Open and learned that she had drawn an opponent nobody wanted to face in the first round: the No. 29 seed, Maria Sakkari, who led the women’s tour with 12 clay-court wins heading into the tournament.

It was no surprise then that Tatishvili lost badly, 6-0, 6-1. The shock came the next day when she went to collect her check for appearing in the first round.

She was directed to the head referee’s office, she said, and informed that her payment of 46,000 euros, or about $51,500, was being withheld because of her poor performance.

“They didn’t even say hi to me; they said, ‘Your account is frozen,’” said Tatishvili, a 29-year-old American. “They talked to me like I’m some kind of criminal or something. It was so disrespectful. I even cried.”

Tomic and Tatishvili were the first players to lose 100 percent of their pay for violating a policy in the Grand Slam rule book, introduced for the 2018 season, that requires players in first-round matches to “perform to the required professional standard.”

Those who don’t, in the opinion of the tournament referee, are “subject to a fine of up to first-round prize money.”

The differing circumstances of the two cases reflect the subjective nature of the rule, whose policing can have severe consequences in a sport in which most players struggle to break even financially.

Both penalized players have appealed, and their opponents have said they disagree with the penalties. Sakkari called Tatishvili’s “super unfair.”

The rule was intended to prevent injured players from competing in Grand Slam events just to claim prize money, which has been rising steeply for even first-round losers in recent years. It was prompted by a rash of players retiring midway through first-round matches at majors because of pre-existing injuries. 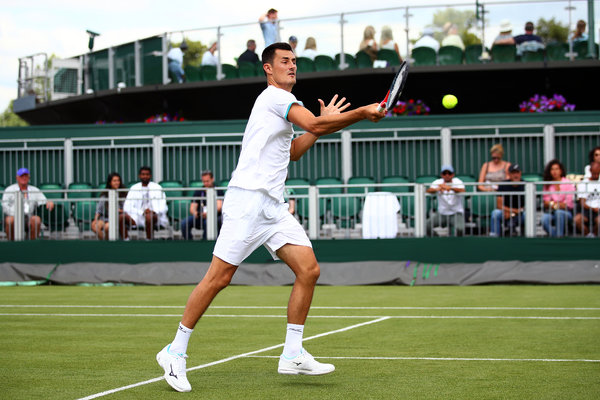 The trend reached its nadir at Wimbledon in 2017, when the opponents of Novak Djokovic and Roger Federer halted back-to-back matches on Centre Court after less than an hour, shortchanging spectators.

A carrot was offered to players who withdrew before play began: half of the first-round prize money. The stick: harsh fines if the referee decided a player should not have taken the court.

Two players were fined under the new rule last year: Mischa Zverev, who was docked 75 percent of his prize money after retiring because of illness halfway through his opening match at the Australian Open, and Peter Gojowczyk, who lost about 60 percent of his pay after he retired from his first-round match at the French Open with a hip injury.

Since the rule took effect, the number of midmatch retirements in the first round has dropped, and the number of pretournament withdrawals has increased.

This year, though, tournament referees have punished seemingly healthy players who have completed matches but turned in underwhelming performances.

Tomic had no injury, but the referee determined that his effort against Tsonga had been substandard. The match lasted only 58 minutes and featured Tomic playing in a characteristically languid style, often at a walking pace. Even though Tomic lost quickly, there was a stretch when he won 16 consecutive points on his serve.

“I think I played as best as I could,” said Tomic, a 26-year-old Australian ranked 96th. “It’s just I played terrible.”

He was not assessed a code violation for lack of effort during the match; his forfeiture of the prize money was announced two days later.

Vasek Pospisil, a member of the ATP player council, said the decision set a “horrible precedent.”

“His effort levels or lack thereof are almost irrelevant: He didn’t get a code violation or warning during his match for lack of effort, so it doesn’t seem right to then punish him afterward,” Pospisil said. “This should have been done by the umpire during play. If he received a warning, he could have changed his attitude and avoided a fine.”

Another member of the council, John Isner, said he was O.K. with the fine because Tomic’s match “doesn’t look good for our game.”

But Tsonga said the decision discredited the effort and focus he had summoned to beat an erratic player like Tomic. “It’s like what I did was not win,” he said. “It’s like I was just here and I just won because, they said, he didn’t play enough.”

Tomic won 38 percent of the points and prevailed in seven of the games; three other men won the same number of games or fewer in the first round. Seven more won the same or fewer in later-round losses, including Tsonga, who won only seven games in a third-round loss to Rafael Nadal. But those matches were not subject to scrutiny under the “First Round Performance” rule.

Tomic was most likely treated as a repeat offender. Once a sensation who reached the Wimbledon quarterfinals at 18, he has been dogged by accusations of giving little effort. After delivering a lackluster performance at Wimbledon in 2017 and saying that he was “bored” during his first-round loss, Tomic was dropped by his racket sponsor, Head. Matches like a 28-minute loss at the Miami Open in 2014 earned him a nickname: Tomic the Tank Engine.

“There is a history there,” Mark Woodforde, a six-time Wimbledon doubles champion from Australia, said last week on BBC Radio 5 Live. “I’m pleased that the club took away that prize money. Hit them where it hurts.”

In the case of Tatishvili, the concern was not her effort on the court, but her readiness to compete at all after the long injury layoff. Ranked as high as 50th in 2012, she went to Paris unranked, but was able to enter the French Open using a protected ranking, which was set to expire at the end of June. She was hoping to begin her comeback to the tour there, and she has played two tournaments since, with plans to play more in August.

To prepare for her return, Tatishvili arrived in Paris a week before the tournament began. Because of her long absence, her participation was contingent on passing stability tests administered by tournament doctors, which she did.

Tatishvili said she did not consider taking advantage of the rule allowing her to pull out of the tournament beforehand for 50 percent of the pay because she felt ready to give competing a shot.

She won 31 points and extended Sakkari in many long games, but still lost badly.

“I went and did my best on the court,” Tatishvili said in an interview a week after the match. “Did I play unbelievably well? No, because I’m just starting back.”

The day after she was denied her prize money, Tatishvili received an email from Andreas Egli, the Grand Slam supervisor, that said officials had reviewed her match live and on video, looked at match statistics and determined that she was “not sufficiently prepared to play a Grand Slam.”

Sakkari, her opponent, said Tatishvili was “definitely not tanking the match.”

“I was playing really good these weeks, and I think she did the maximum she could,” Sakkari said.

To appeal the ruling to the Grand Slam Board, Tatishvili’s lawyers prepared a 40-page legal document with supportive statements from several tennis players and coaches, including Sakkari and Chris Evert, and criticisms of the rule’s vagaries.

“First round performance rule gives professionals like Anna no idea as to what they must do or not do during their first-round match to meet the rule’s undefined ‘professional standard,’” the document said.

Tatishvili said the rule is too subjective to be properly enforced. “They’re making assumptions and they’re labeling me,” she said, “and pretty much destroying my reputation.”