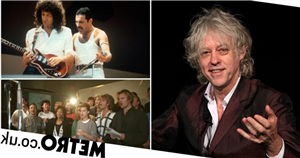 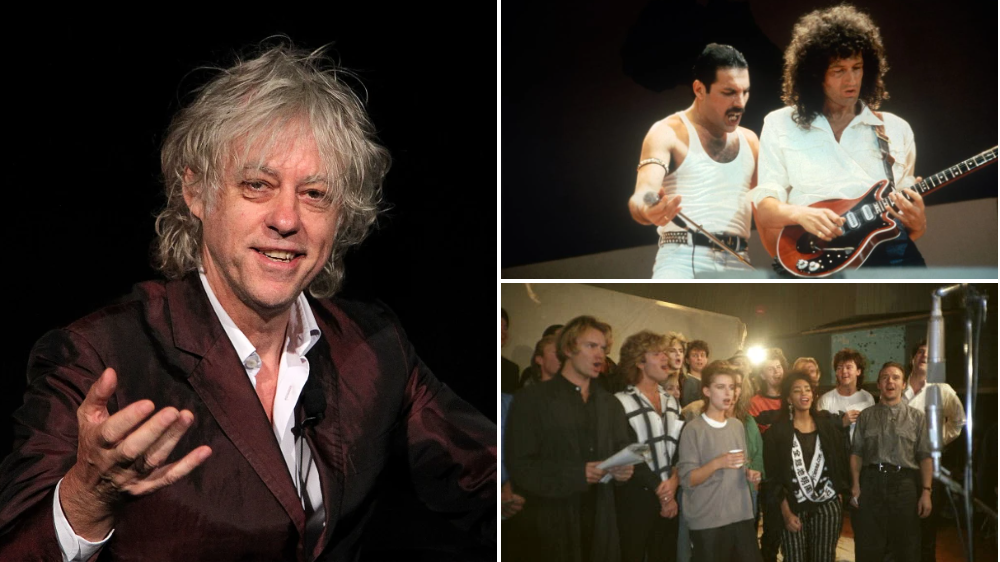 Do They Know It’s Christmas? has become one of the most famous festive tunes, but Sir Bob Geldof is absolutely sick of it.

The song was first released in 1984 and was written by Sir Bob and Midge Ure to raise money for the 1983–1985 famine in Ethiopia.

There have actually been several other versions of the song since, as a second version was released under the name Band Aid II in 1989, with Kylie Minogue singing the opening line.

In November 2004, Band Aid 20 – which included Coldplay frontman Chris Martin – recorded a third version of the hit to mark the 20th anniversary, which went to number one in the charts.

Finally, and most recently, in 2014 a version of the song was released – featuring stars such as One Direction, Ed Sheeran, and Ellie Goulding – to fundraise for the Ebola crisis in Western Africa, and the lyrics were changed to reflect this.

But despite all the different versions of the song smashing the charts and raising millions for charity (the original stayed at number one for five weeks in the UK) Sir Bob doesn’t want to talk about it anymore.

Speaking to Radio Times, the musician admitted he predicted £100,000 would be raised with the song, with the actual sum surpassing all expectations.

To date, the record has sold more than three million copies in the UK alone, and raised over £200million for charity, with Sir Bob declaring: ‘The song has a life of its own. It raises money every time it’s played in every f***ing supermarket. It’s Mistletoe and Wine at vegetables, Slade at baked beans, Wizzard for tea and coffee and Band Aid at the butcher’s counter. I mean… It drives me f***ing mad at Christmas. But there it is.’

As for Live Aid, don’t even go there…

The star, who has become known for his way with words, reckons Live Aid is going to be his legacy, referring to the concert of 1985 that a mega 1.5billion people worldwide tuned in for.

‘I don’t want to talk about it because it’s a question I’ve been asked in every single f***ing interview for the last 40 years,’ he said.

‘When I die, it’ll be, “He did a concert called Live Aid and he wrote a song called I Don’t Like Mondays.” It’s not bad. There are worse things to be remembered for. But I’ve had a long music career, including 17 Top 20 hits, and I have done other stuff,’ he added, apparently grimacing down the Zoom screen from Ireland.

‘The other problem is, Band Aid is a living instrument. When I put on the email this morning, there were at least eight new urgent requests for help in Uganda. Even after 40 years the consequences of that day live for ever for all of us who made Live Aid.’

However, as Sir Bob’s bad luck would have it, this week the BBC is marking the role Live Aid played in the corporation’s 100-year history, as it continues its centenary celebrations.

Thanks to satellite technology, Live Aid – which saw performances Elton John, Queen, Madonna, and more – became the most viewed television event in history.

So, at least at the moment, it seems Sir Bob, 71, seemingly has no choice but to talk about Live Aid and his charity work.

The Irish singer-songwriter added that the concert still ‘resonates down the years’ because it was ’emblematic of its time.’

As for the star-studded line-up, Sir Bob reckons it was a ‘summing-up of pop at that moment,’ noting a special moment when David Bowie performed Heroes, which led to phones going ‘crazy’ with donations.

Elsewhere in his interview with Radio Times, Sir Bob vocalised his support for the climate activists who threw soup over Van Gogh’s painting, hailing their actions ‘1,000% right.’

The singer said it had been ‘clever’ to deface the 1888 painting while it was covered by a glass screen, because people would only view the act as annoying and, ‘annoying is quite good.’

Sir Bob – a long-standing climate and humanitarian campaigner – recalled feeling ‘f***ing furious’ when Extinction Rebellion recently blocked the roads, but said if he was 18-years-old, he would absolutely be there himself.