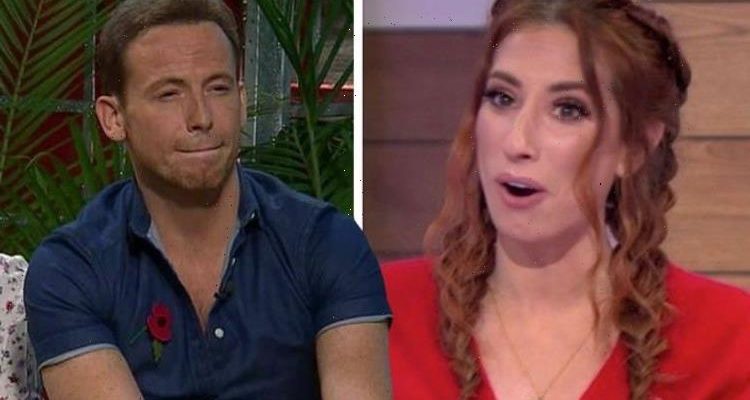 Joe Swash, 39, and Stacey Solomon, 32, are the picture perfect family we love to see on Instagram. But the former EastEnders actor admitted the first time he ever met his now fiancée and mother of two of his children, wasn’t as romantic as fans may think.

I remember meeting her and I distinctly remember the smell!

They first spoke to each other after the Loose Women star won I’m A Celebrity in 2010, and he was working on the after show following his winning stint in the jungle in 2008.

As Stacey showed two of her older sons the moment of their first brief meeting, Joe brought their jungle memories all back as he joked around in a new interview.

“Do you remember when you came out of the jungle and I said hello to you?” he laughed, calling out Stacey.

“Did you know that she smelled worse than any other camp mate that came out of the jungle?!”

He went on to exclaim: “Oh my God. Honestly! I remember meeting her and I distinctly remember the smell!”

But he said it was “so cute” to be able to show their children how far back the pair go before they became official.

“It was nice for them to see that, we’ve got a long history, we go back so far,” he smiled.

“Me and Stacey, we love I’m A Celebrity, we’ve got a great affinity with the show.

“And when we look at our kids, it’s all because of the jungle, really.”

While he cheekily admitted he’d ‘never say never” about returning for another series of the hit ITV show and competing in Wales, his clan are focused on their “really special” Christmas; the first in their new home with their new baby daughter Rose.

Earlier this week, Stacey spoke out about her fears of her maternity leave ending, having got so used to being at home and spending quality time with her three boys, daughter and fiancé Joe.

The TV star announced she was leaving the show in August to prepare for labour.

She gave birth to Rose in October, and fans of the presenter have been very invested in the first few months of her life.

Taking to Instagram, Stacey spent the day reflecting on how lucky she is to be surrounded by her loved ones.

Following a series of snaps on her story, the TV star shared one final thought before she went to bed.

Alongside a sweet picture of her eldest son Zachery cradling Rose, she gushed: “It’s all about the memories… I just don’t know how we got so lucky.

“Feeling so grateful and a little emotional about them. Tonight and always.”

She added: “Just spending proper time with them is everything.

“I think I’m getting emotional thinking about my maternity ending,” she penned.

Stacey had just finished decorating her first real Christmas tree… and wasn’t a fan of the outcome.

The queen of neat and tidy admitted she wasn’t the best at dressing a real spruce, but enjoyed the experience nonetheless.