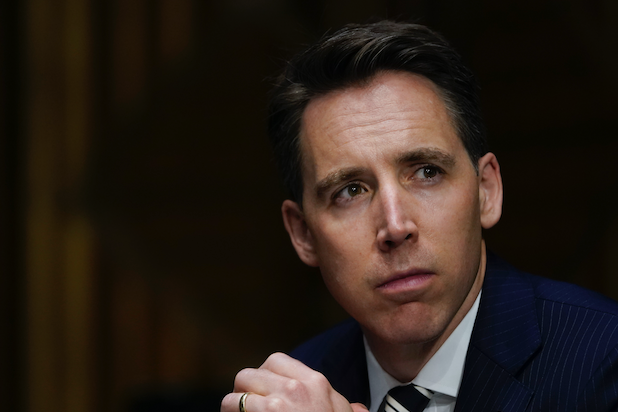 Senator Josh Hawley’s book “The Tyranny of Big Tech” will be published by Regnery following Simon & Schuster’s decision to scrap the release last week, citing Hawley’s involvement in efforts to overturn the 2020 election.

“Accusing Hawley of complicity in the storming of the U.S. Capitol on January 6, the New York-based publishing conglomerate made the Missouri Republican one of the highest-profile victims of the ‘cancel culture,’” Regnery, a subsidiary of the conservative Salem Media Group, which is best known as a right-wing radio broadcaster producing shows by Hugh Hewitt and Larry Elder, said in a press release Monday. “Regnery will publish the senator’s book in the spring of 2021.”

Regnery, which is a much smaller publisher than Simon & Schuster, continued: “Despite Senator Hawley’s immediate and forceful condemnation of the violent incursion, social media teemed with calls for retribution for his objection to the certification of the electoral vote. The next day, citing his purported ‘role in what became a dangerous threat to our democracy and freedom,’ Simon & Schuster announced that it was dropping Hawley’s book, scheduled for publication in June. Responding to the impulsive decision, Hawley stated on Twitter, ‘Simon & Schuster is canceling my contract because I was representing my constituents, leading a debate on the Senate floor on voter integrity, which they have now decided to redefine as sedition.’”

Following the siege on the U.S. Capitol by Donald Trump supporters on Jan. 6, Simon & Schuster announced it was dropping Hawley’s deal the following day, releasing this statement: “After witnessing the disturbing, deadly insurrection that took place on Wednesday in Washington, D.C., Simon & Schuster has decided to cancel publication of Senator Josh Hawley’s forthcoming book, THE TYRANNY OF BIG TECH.”

It continued: “We did not come to this decision lightly. As a publisher it will always be our mission to amplify a variety of voices and viewpoints: At the same time we take seriously our larger public responsibility as citizens, and cannot support Senator Hawley after his role in what became a dangerous threat to our democracy and freedom.”

Hawley was among the group of Republican lawmakers who publicly supported Trump’s efforts to overturn the 2020 election, and vowed to contest the results during the joint session of Congress certifying the election.

Trump meanwhile had organized what became known as the “Save America” rally to protest the certification, which was held on Wednesday at the same time Congress convened. During the rally, Trump gave a speech inciting supporters to march on the capitol in order to somehow convince congressional Republicans to stop the process. Hundreds of Trump supporters complied, ultimately breaking past police barricades and storming the capitol building itself. Congress and Vice President Mike Pence were forced to evacuate and the certification was halted.

The rioters occupied the Capitol for hours, committing acts of vandalism and stealing property before departing around 5:00 p.m. ET. 4 people also died — one rioter who was shot by police, and three other people who died from unspecified medical emergencies. The certification process resumed at 8:00 p.m. and Biden was formally confirmed as the next president just after 3:30 a.m. Thursday.

Hawley did follow through with his plan to try and derail the certification process by objecting to the Electoral College tallies for both Arizona and Pennsylvania. But his support for Trump’s attempts to subvert the 2020 election didn’t stop there. He was also photographed expressing clear and unambiguous support for the “Save America” rally just prior to the outbreak of violence.