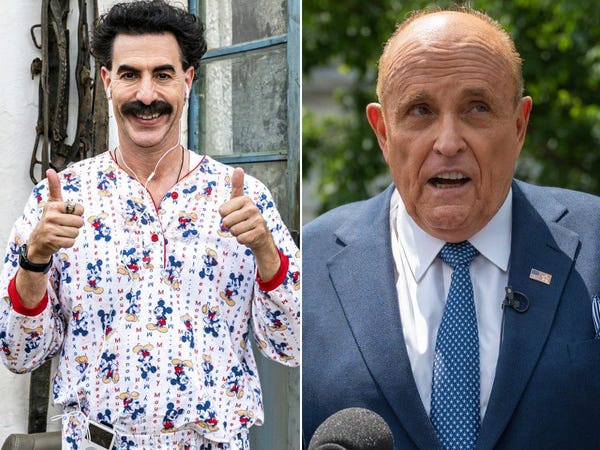 The stories about how Sacha Baron Cohen was able to dupe Rudy Giuliani in "Borat 2" just get better and better.

In the new mockumentary from Cohen in which he portrays the fictional Kazakh journalist, President Donald Trump's personal lawyer appears to be in an inappropriate encounter with the actress who plays Borat's daughter in the movie, Maria Bakalova. At one point, it even appears that Giuliani has his hands in his pants.

"Rudy thought he was alone with her," he told the late night host. "He brought a cop with him, an ex-policeman, and the policeman does a sweep of the entire hotel suite. And I'm obviously running to get in there, jump in the hideaway, lock this thing shut."

Cohen explained last week on "Good Morning America" that the movie had to build a "hideaway" inside the hotel suite so he could stay without being detected during the interview between Giuliani and Bakalova, who impersonates a reporter in the scene to meet Giuliani.

Continuing on the "Late Show," Cohen added: "And I've got a little internal lock and it's pitch black in there. [His team] does a sweep and then leaves the room and then the security guard sits outside the room ensuring that no one could come in or out, which is actually even more scary when you think about it for her."

Cohen added that the hiding spot was inside the closet of the suite's bedroom. It was six foot high by three feet wide. The actor was inside that cramped space while Bakalova and Giuliani were in the bedroom together. After Giuliani laid on the bed with his hands in his pants (Giuliani has claimed he was tucking in his shirt), Cohen finally revealed himself dressed in pink lingerie.

The filmmaker said while inside the cramped dark hideaway during the filming of the interview he only knew what was going on through text messages that he was receiving from "Borat 2" director Jason Woliner. The only problem was, the phone Cohen was using was close to running out of battery.

"The interview starts and I switch on the phone and there's only 3% battery," Cohen revealed to a stunned Colbert. "Hold on, we've got Rudy Giuliani. We've got the president's lawyer. We've got this scene — this is the climax of the movie — and no one thought it might be worth charging the phone?"

"So I managed to keep it on airplane mode and occasionally check in," Cohen said.

Watch the entire interview between Colbert and Cohen: