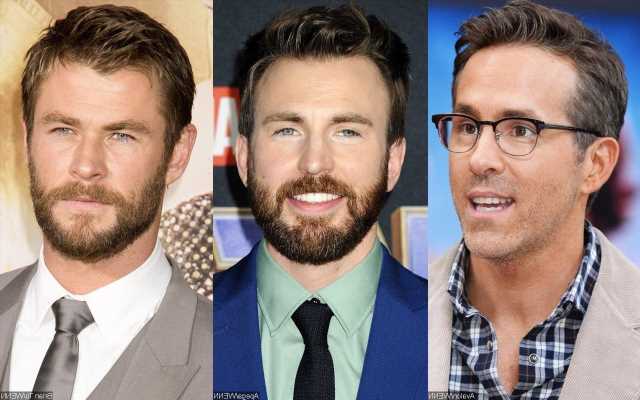 The ‘Deadpool’ leading man has a hilarious response after the ‘Thor: Ragnarok’ actor trolls the Canadian native for not inviting him to appear in his latest movie.

AceShowbiz –Ryan Reynolds has used Chris Evans as his human shield figuratively to protect him from Chris Hemsworth‘s playful online attack. After he was trolled by the Australian hunk for snubbing him out of “Free Guy“, the Canadian native jokingly blamed the Captain America depicter for it.

A few days after the movie release, the “Free Guy” star took to his Instagram account on Tuesday, August 17 to thank some of the A-list actors who made cameos in his latest film. “This movie is about friendship,” the 44-year-old actor captioned his post which included a few pics of himself alongside the actors on set.

“And friendship is at its simplest, just showing up. While I don’t have photos of everyone, here’s to all the incredible pals who showed up for this film. #FreeGuy,” he continued in his note. The series of snaps included high-profile actors Channing Tatum, Hugh Jackman, Dwayne “The Rock” Johnson, John Krasinski and Evans.

In the comment section of the post, Hemsworth, who was noticeably absent from any photos in the post, chimed in with a cheeky comment about being left out of the film. “No worries, mate,” the Thor depicter in Marvel Cinematic Universe wrote. He then added, “Least I could do, BFFs.”

Making an excuse, Reynolds then jokingly replied, “Evans said you weren’t ‘camera ready,’ ” referring to the “Captain America: Civil War” actor who has starred with Hemsworth in Marvel films. “Whatever that means,” he added. 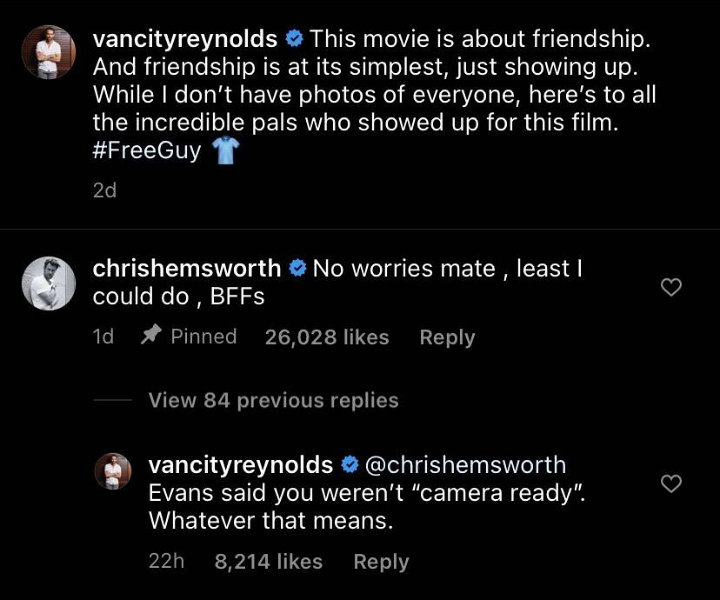 In “Free Guy”, Reynolds portrays a bank teller named Guy, who discovers that he’s actually a background character in a Grand Theft Auto-like open world video game. When the game and everyone he loves in it are threatened, he teams up with Molotov Girl, played by Jodie Comer, to save the day as the heroic Blue Shirt Guy. The film also stars Joe Keery, Lil Rel Howery, Utkarsh Ambudkar and Taika Waititi.

Just two days after the blockbuster hit cinemas in the United States, Reynolds confirmed on Twitter that Disney already gave the green light for a sequel to the action-comedy film. He announced, “Aaaannnnd after 3 years messaging #FreeGuy as an original IP movie, Disney confirmed today they officially want a sequel. Woo hoo!! #irony.” Director Shawn Levy shared the news on his own Twitter account and commented, “Yuuuuuuuup.”

During a virtual press conference with Shawn, Reynolds gushed about making the film, “I do think it’s the best movie-making experience that I’ve ever had, easily, but also the best movie I’ve ever done.” He continued, “It’s the most pertinent to our times, in that sense. Where I feel ‘Deadpool’ was a movie that was pertinent to the comic book culture when it came out, this really to me speaks in a broader spectrum of where we are in the world and how we are in the world.”