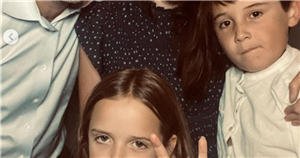 Richard Bacon revealed that his cocaine past resurfaced during an incredibly awkward chat with his young children.

The 45 year old, who hosted Good Morning Britain on Wednesday, was axed from BBC1's Blue Peter, 18 months after landing a coveted presenting role, for using cocaine in 1998.

More than two decades later, Richard has forged a successful career as a TV producer in Los Angeles, where he lives with his wife Rebecca McFarlane and their two children Arthur, nine, and daughter Ivy, seven – who were naturally curious to know more about their father.

Speaking on Andy Coulson's Crisis What Crisis? podcast, Richard explained he was forced to shout "stop!" when the youngsters asked smart speaker Alexa who their dad was.

"I am sitting in a room in my house in Los Angeles, and there is one of those Amazon Alexas next to me, and my kids said, 'Oh Alexa, who is Richard Bacon?'," he explained. "And it comes up straight away, 'Richard Bacon is an English television presenter. He was fired from Blue Peter in 1998 for taking…'

"They said, 'What are you saying stop for? Why did you get fired?' And then they asked again."

Richard's firing made big news at the time, with the BBC's head of children's programmes Lorraine Heggessey issuing a statement about the termination of his contract.

She said: "It is sad that such a talented presenter as Richard Bacon has not only let himself and his colleagues down but, most important of all, he has let down the millions of children who watch Blue Peter."

Richard has been open and honest about his past struggles and in 2018, vowed to cut out booze and drugs to improve his lifestyle after he was placed in a medically induced coma due to a lung condition.

Speaking to The Times, Richard said that his near-death experience had given him a fresh outlook on life.

"I drink too fast, and I drink too quickly. Four or five drinks a night," he said. "In LA, I've been smoking weed [too]. It's all legal over there. I'm going to stop that a well."

He added: "I'll be a better employee – more creative – and a better dad."