When Bob Hawke's adult children wore black to his 1995 wedding with his biographer and long-time mistress Blanche d'Alpuget at Double Bay's swanky Ritz Carlton, their silent protest was heard loud and clear. 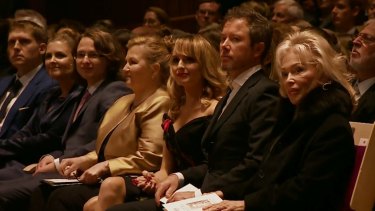 In more recent years, following the death of Hawke's much-loved first wife Hazel in 2013 after a long and public battle with Alzheimer's, family friends claimed there had been something of a "rapprochement" between d'Alpuget and the Hawke children.

Indeed, one of Hazel's friends confided to PS this week she was "saddened and shocked" to read about the latest development over Hawke's estate. This was one of the same friends who had been by Hazel's side when she threw a "freedom party" at her Northbridge home the same night Hawke and d'Alpuget were married. 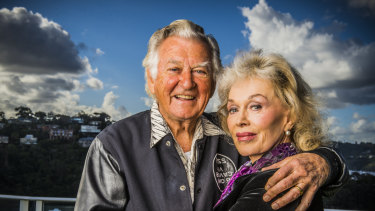 Recently it had been reported that relations had warmed between d'Alpuget and Hawke's daughter Sue Pieters-Hawke, the author of her mother's biography, who was famously embroiled in a scandal that played out in a Qantas lounge several years ago.

In 2011, there were reports of a physical altercation between Pieters-Hawke and d’Alpuget at the Qantas Chairman’s Lounge at Brisbane Airport. Pieters-Hawke, who called the police to the lounge “to ensure there was an accurate record of the alter­cation”, later told the ABC’s 7.30 that her stepmother had slapped her in the face.

“I approached her to say a friendly hello, but she slapped me hard three or four times, and yes, I was shaken,” Pieters-Hawke said. 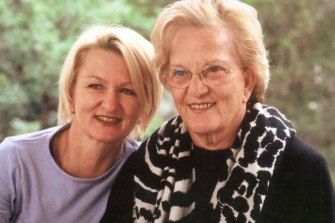 Sue Pieters-Hawke and her mother Hazel.

Hawke divorced Hazel, the mother of his three children, in 1995. He married d’Alpuget the same year.

Frosty relations between the Hawke children and his widow appeared to bubble to the surface during Hawke's memorial service at the Sydney Opera House last month, and it was noted d'Alpuget only briefly mentioned Pieters-Hawke during her speech, seen as a snub by many to Hawke's two other children, while there was an awkward encounter when Pieters-Hawke attempted to pat d'Alpuget on the knee, the cameras capturing her frosty response.

The Hawke children have long endured their family laundry being given a good public airing. 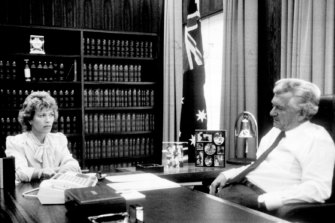 D'Alpuget herself published an essay on her clandestine affair with Hawke, which had remained a secret even in the years that followed when she wrote his biography.

In 2011, d'Alpuget spilled the beans and published a 10,000-word essay titled On Longing, in which she detailed their illicit romance while they were both still married, which began in Canberra in 1974, long before Hawke became prime minister.

D'Alpuget wrote: "With mutual wordless consent, it was agreed we would become lovers as soon as possible – which happened to be in a different city, the following night. He was late, and arrived wearing pancake make-up. Did he enchant me with flowers, chocolates, sentiments? On the contrary. He was charming, funny and straightforward: he liked me and enjoyed talking to me; what he loved was sex. He was a busy man; I was a playmate. That suited me. I wanted a playmate too – and I was also busy, but my busyness wasn't quite as weighty as his."

D'Alpuget, who recently moved out of the Northbridge home she had shared with Hawke (after reportedly selling it for nearly $15 million) and has relocated to a $3 million apartment in Sydney's CBD, got a kick out of having an affair with a powerful man, even though – by her admission – he couldn't pronounce her name.

"We were able to see each other every few weeks; in between, there were no phone conversations, no notes, messages, nothing. I longed for contact with him but he would simply vanish somewhere, into his huge, feverish, demanding life."

The shine started to fade when d'Alpuget realised "he was having affairs with women all over the country, that this love life was a kind of freewheeling, decentralised harem, with four or five favourites and a shoe-sale queue of one-night stands".

Eventually, the pair ended the affair, only to be reunited years later when d'Alpuget was researching Hawke's biography. She maintains they did not sleep together at the time but things heated up soon afterwards, the couple making good use of disguises (red wigs, cowboy hats) to meet clandestinely.

Behind every great woman…

His wife was one of Australian showbiz's brightest stars, taking home the Gold Logie in 1976, but behind Jeanne Little's wigs, the over-the-top gowns and hysterical parties, the most unlikely of men had dedicated his life to her: husband Barry Little. 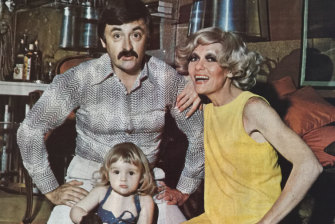 Barry Little with his wife Jeanne and their daughter Katie, at home in the early 1970s.Credit:Courtesy of Kate M Little

Just over a week ago, days after he turned 89 on July 3, Barry – an interior decorator and his wife's greatest fan – died at the Sydney nursing home where he has lived with his wife, who remains oblivious to his death and is in the advanced stages of dementia.

In his final hours, he was comforted by the couple's only child, daughter Katie, who last year published a book about her unconventional family.

"It was very emotional for me … you know, I feel like I have lost both my parents. He wanted me to read out passages from the book, I'm just so happy I got to write it and have it published while he was alive … mentally he was fine, but physically he had been in a bad way for a long time," Katie told PS.

It was while writing her book, Catch A Falling Star, that Katie discovered her father – who became Jeanne's devoted husband Barry – had been in a gay relationship for years before he married her high-camp mother.

Colin Brees and Barry had been lovers, but for years Katie considered Brees her "uncle", along with his subsequent life partner, Colin Johnston.

"We referred to them as 'the Colins'. They remained close to me and my parents for years, Colin Brees, who recently passed away, would work with Dad in his business in the basement of our house in Paddington, and I would share the attic with mum during the day, watching her making amazing creations on her sewing machine. In the middle was our crazy family home," Little said.

"This was years before same-sex marriage was legalised and even before being gay was decriminalised in NSW. I thought it was important to show that families exist in all forms and have done forever. It was completely normal for me growing up … and still is."

Kidman returns to Oz for a reprieve

Nicole Kidman flew back into Sydney last weekend with her husband Keith and their daughters Sunday and Faith seeking a little reprieve from her hectic schedule. 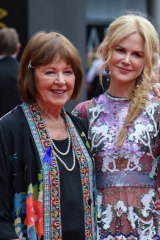 And PS certainly believes she is due for a rest. Kidman's been busy lately, coming off the back of the hugely successful second series of Big Little Lies, which she produced and has been promoting heavily for months.

Kidman is also involved in six other major productions – that she is either shooting, producing or wrapping up – between now and the end of the year, comprising a combination of movie and television roles.

Among these is her take on Gretchen Carlson, the American journalist currently being portrayed by her good mate Naomi Watts in the critically acclaimed miniseries The Loudest Voice, which also stars Kidman's other close buddy Russell Crowe as former Murdoch newsman, the late Roger Ailes.

No word on whether Kidman will catch up with Watts while she is here, with Watts preparing to start shooting a local film on the northern beaches next month about a magpie who helps a Sydney family deal with a traumatic incident that leaves a young mother wheelchair-bound.

As for other photos that were bought up by the gossip magazines showing Kidman and Urban appearing to hold up Janelle Kidman? Any suggestions that the 79-year-old former nurse is in poor health are a little off.

Janelle, who has been getting treatment for a sore leg, has been keeping a pretty impressive social dairy, and this week had dinner and theatre dates with her girlfriends as well as a catch-up with her famous daughter, having celebrated her youngest daughter Antonia's 49th birthday last weekend.

They paid Kylie Jenner $250,000 to dip herself in their fake tan on her Instagram account, but the brains behind Australia's Bondi Sands went into damage control last week when their product ended up in a controversial fake ad that appeared on the very same social media platform they have built their empire on. 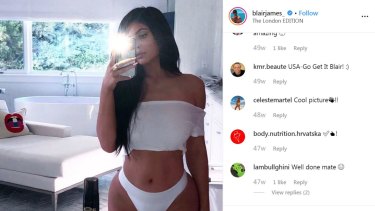 The phoney commercial appeared on Instagram last week and appeared to show one of Bondi Sands ads, with text altered to read: "Australia's favourite tan for girls who want to be black but not black black". 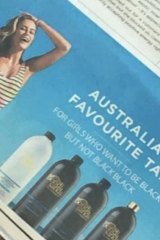 Bondi Sands is a start-up by Melbourne business partners Blair James – who used to run tanning-bed salons – and Shaun Wilson. The pair have been bathed in positive publicity since launching the business, targeting the beautiful people by sponsoring events such as the Coachella music festival, and are now stocked in 8000 stores across America.

James told PS the company was still investigating how the fake ad came to be and said his only strategy was to deal with it head-on and reassure customers the ad was entirely fake, as it did via social media last weekend.

"We would never do anything like that; it goes against everything we are trying to do," he said.

Bondi Sands is not alone, with Zoe Foster Blake finding herself on the end of some unsavoury commentary on social media after she was accused of not catering to non-white customers with one of her products.

Social media has become a business minefield for some cosmetics brands, with debate raging over the "blackfishing" phenomenon, which is when white people are criticised for using fake tans and cosmetics to change their racial appearance. These are indeed strange times.

The fun continues for Sydney's unstoppable socialite Skye Leckie. While it appears the swimsuit tour of Europe has come to an end, PS was heartened to see a new incarnation appear on Instagram, with Leckie dressed up as a forest nymph at a party in France near the Swiss border. 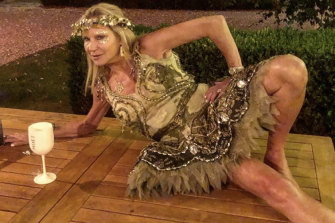 Meanwhile, further south in St Tropez, fellow international socialite Julie Bishop was living it up at Club 55 where she celebrated her 55th birthday with her boyfriend David Panton and a gaggle of Perth silvertails, including Jilly Hoad, Wendy Marshall, Denise Satterley and heiress Rhonda Wyllie, whose magnificent bouffant threatened to block the fabulous Mediterranean sunshine. 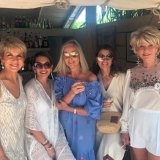