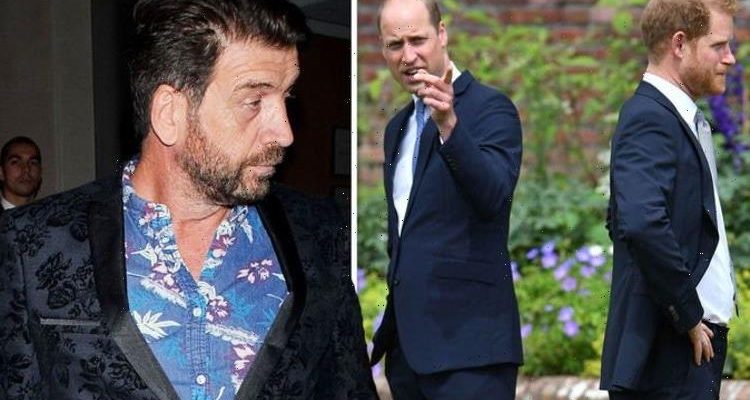 Nick Knowles shows family what he cleared from their house

DIY SOS host Nick Knowles, 59, has revealed he feels saddened by the reported ongoing feud between Prince Harry, 37, and Prince William, 39. Nick has worked with the royals on various TV projects, including a special episode of his BBC show in 2015.

The brothers wore personalised hats, fluorescent boots and steel-toe boots, and joined DIY SOS to help transform a site in Newton Heath, Manchester, into a village for army veterans.

However, it is claimed that William and Harry now have a more strained relationship following the latter’s move to the US with wife Meghan Markle, 40.

Speaking about reports of the Duke of Cambridge and Duke of Sussex’s disagreement, Nick said: “It’s a great sadness that they are not seeing eye to eye.

“I hope, because they are really good lads with really good hearts, they find a way to find their way through it.”

Nick previously opened up on working with the duo, telling Radio Times after filming: “Having met them before, I was aware they don’t particularly want to be walking around a building site and being called ‘Your Royal Highness’.

“They told me ‘You can call us William and Harry’. So everybody was quite happy to call them that.

“Apart from our electrician Billy, who called them ‘sausage’. But then he calls everybody sausage.

“Harry said to him: ‘If you’re going to call me sausage, it’s going to be a very long day’.”

Harry and William were part of the largest ever project on DIY SOS at the time.

Empty homes in Newton Heath’s Canada Street and New Street were refurbished for former military personnel to live in with their families.

The Princes agreed to help out with the finishing touches after Nick gave them a tour of the site.

William got on with painting the kitchen in one of the properties, while Harry laid paving stones in the garden of the house next door.

However, Harry then took a cheeky swipe at his older brother, joking with an ex-serviceman that he had to give William’s painting a re-touch as it was not “very good”.

It comes after it was claimed that William was left “blindsided” by Harry and Meghan’s decision to leave the Royal Family.

“Part of this role and part of this job, and this family, being under the pressure that it’s under, inevitably, you know, stuff happens,” he said.

He added: “We don’t see each other as much as we used to because we’re so busy, but you know, I love him dearly.

“The majority of this stuff (in the press) is created out of nothing, but you know, as brothers, you know, you have good days, you have bad days.”

Harry also told Oprah Winfrey that he and William are on “different paths” and there is “space” between them during Meghan’s interview with the presenter after Megxit.

Meghan also claimed an unnamed royal made a racist comment about her and Harry’s son Archie and that the firm didn’t help her through her mental health struggles.

Soon after the bombshell interview, Sky News reporter Inzamam Rashid asked William if the Royal Family was a racist family, the Duke then turned back towards the press, saying: “We’re very much not a racist family.”