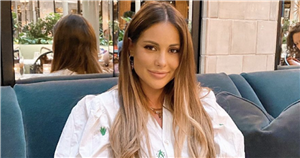 Pregnant Louise Thompson has issued an update after revealing that she was involved in a "devastating" house fire alongside her fiancé Ryan Libbey and her mum.

The former Made In Chelsea star initially revealed the news in a post shared to her Instagram story Saturday 9 October, where she explained that a wine cooler had "exploded" in the middle of the night.

And taking to her social media on Monday, the 31 year old ensured to thank her fans for their support and also praised those who checked to see if their fire and smoke alarms were working.

"Hi guys, I just wanted to say a huge thank you to everyone for reaching out and for all of your kind words," Louise, who is pregnant with her first child with Ryan, began. Louise added: "I'm v pleased that lots of you have gone away to check your fire and smoke alarms – especially those who discovered that they weren't working."

The brunette's post comes days after she revealed that the terrifying house blaze began after a wine cooler "exploded" in the middle of the night.

"Thankfully myself, Ryan, my mum and the dogs are all ok," Louise assured her fans.

Louise continued: "It was an absolutely devastating experience but we managed to get out with minimal damage to our health (including the dogs who we lost in the blinding smoke at one point).

"The emergency services were incredible and arrived in 2 minutes. "Still probably in shock as it was pretty scary, and could have ended in a different outcome but we will get through it and be grateful for our luck.

"A big wake up call as to what is really important in life" she added followed by a red heart emoji.

Louise then explained her reasons for sharing the news with fans on her social media and urged people to be aware of how serious a house fire could be.

She wrote: "There are 2 main reasons I'm sharing on here. 1. To thank the emergency services. If the fire engines had arrived 5 min utes later then things would have looked very different.

Louise went on: "The thick chemical smoke travelled so fast throughout the house which meant that within seconds it was impossible to see or breathe. You literally have seconds to make a decision.

"I now understand why people have to jump out of buildings because they have NO other option and that is a scenario that has been going rumour and round in my head – it breaks my heart.

"I have so much admiration for these men and women who work in the fire services who run the other way into a burning building to rescue people and save homes."

She then insisted to fans: "I urge you guys to check your fire and smoke alarms TODAY because without them we might not have woken up and there may not have been an escape route out.