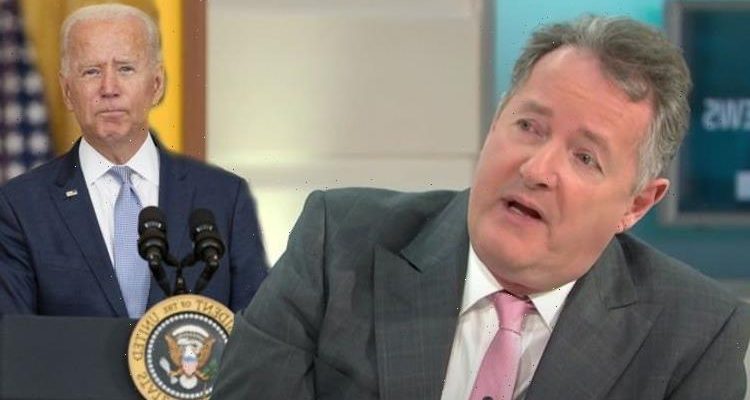 President Joe Biden has been heavily criticised for being away for the weekend as the ongoing tensions in Afghanistan continue to escalate. Now, Piers Morgan has waded in, claiming that the President is “shameful” and “woke”.

Biden’s desertion of Afghanistan will be his Vietnam.

The Taliban are currently continuing their push for power across Afghanistan as they get closer to the capital, Kabul.

Recently, the group said in a statement they do not plan to take Kabul “by force” while gunfire was heard in the capital city.

It was confirmed by an Afghanistan official that negotiators for the Taliban were heading to the country’s presidential palace in order to prepare for a “transfer” of power.

While Boris Johnson has announced that parliament, who are currently on recess, will be recalled tomorrow, President Biden has remained silent, a moved that has angered Piers Morgan.

In view of his 7.9 million Twitter followers, the former Good Morning Britain anchor wrote: “Biden’s desertion of Afghanistan will be his Vietnam – a self-inflicted wound of disastrous proportions.

“Incredible, and utterly shameful, that the most ‘woke’ US President in history has left millions of women to the merciless murderous clutches of the world’s worst misogynists.”

However, Piers’ tweet didn’t appear to resonate with many of his followers, with several leaping to the replies to hit out at the broadcaster.

“Well the UK failed too not just America,” penned one.

While a second added: “Trump planned to do the exact same thing though…. He LITERALLY made the agreement. Is Trump woke now?” referencing Piers’ friendship with former President, Donald Trump.

“@piersmorgan I tend to agree with a lot you say but this started with Trump,” fumed a third.

However, White House officials have confirmed that the President will be continually updated during his retreat after the United States confirms it will be withdrawing troops from Afghanistan.

The President said: “One more year, or five more years, of US military presence, would not have made a difference if the Afghan military cannot or will not hold its own country.

“And an endless American presence in the middle of another country’s civil conflict was not acceptable to me.”

However, Biden’s decision has been met with widespread criticism but the withdrawal process has already begun, with all troops expected to be removed from Afghanistan by September 11.

As a result, the Taliban have clashed with Afghan security forces in the absence of Western military and have taken over several provinces.

On Friday, General Sir Nick Carter, the Chief of the Defence Staff, revealed that Al-Qaeda terrorists are fighting alongside Taliban militants, with thousands of innocent civilians fleeing brutality and misery across the country.

Around 600 British troops have been deployed to help up to 4,000 British embassy personnel, translators and “other personnel that might be at risk,” including security guards, for a safe return to Britain later this month.

Those leaving Afghanistan will be using commercial airliners but there are plans in place to use military aircraft should services be suspended or local airports come under attack.

Many in Afghanistan now consider it a matter of “when not if” Kabul will fall to Taliban militants following the latest news that Afghan troops have surrendered Bagram airbase to the Taliban; the base is home to a prison housing 5,000 inmates.