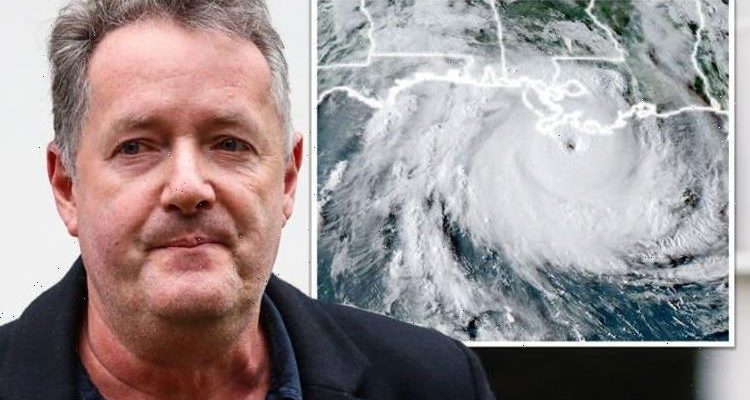 The 56-year-old TV star said the “absolutely terrifying” storm is likely to cause “mayhem” when it closes in from the Gulf of Mexico.

It could be one of America’s biggest ever hurricanes, he pointed out.

Many have been evacuating the area before the hurricane, which is nearing Category 5, makes landfall this evening.

Piers, who has been holidaying on the Caribbean island of Antigua this summer, wished those in the state of Louisiana “good luck”.

“One of America’s biggest ever hurricanes.

“It will cause mayhem when it smashes into Louisiana in a few hours – good luck to everyone there,” he added, in view of his 7.9 million followers.

It has been reported that the storm could be stronger than Hurricane Katrina, which devastated New Orleans 16 years ago.

“I covered Hurricane Katrina for CNN. The devastation is forever seared into my brain,” a news reporter wrote in the comments section of Piers’ post.

“My heart goes out to the people of the Gulf Coast,” he added.

“The storm surge off that will be most devastating. Katrina was only a cat 3 and caused 27ft surge can you imagine Ida ripping through her same path on 16th anniversary as a cat 5,”(sic) another added.

Last night, Governor John Bel Edwards warned residents to get to a safe place in order to ride out the storm.

“This will be one of the strongest storms to hit Louisiana since at least the 1850s,” he tweeted.

“Preparations need to be complete and you need to be where you intend to ride out the storm by tonight.

It is unclear if Piers is back in the UK after sharing snaps of his recent Caribbean holiday.

Yesterday, he thanked staff at the Jumby Bay Island Resort on Instagram for looking after his family during their luxury getaway.

The father-of-four, who shares nine-year-old daughter Elise with his wife Celia Walden, and three grown-up sons with his ex wife Marion Shalloe, posted a picture of his eldest children online.

Spencer, Stanley and Albert could be seen posing on the beach alongside a throwback picture from their childhood.

“How it started… How it’s growing…” his caption began.

“Thanks to all the brilliant staff at @jumbybayresort for another wonderful holiday. Really is a very special place run by very special people. My sons and I go there most years for our annual ‘lads holiday’ and love Jumby like a second home because that’s how everyone who works there makes us (and every other guest) feel.

“ps Relax, trolls, I paid full whack….I just give them lots of Insta love because they deserve it,” he quickly added, predicting future comments.