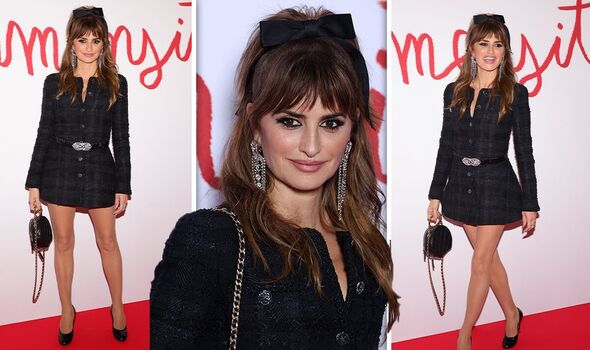 Ageless Penelope Cruz, 48, puts on a rather leggy display in a busty black mini dress

Penelope Cruz is known for her enviable and effortless appearance, and last night’s red carpet appearance was no different. The Hollywood actress stunned as she took to the Paris photocall red carpet in a black mini dress.

Penelope Cruz, 48, looked younger than ever as she posed on the L’Immensita red carpet in Paris last night.

The Hollywood actress put on a rather leggy display in a black bouche mini dress, which perfectly showcased her enviably toned pins.

Penelope was sure to turn heads as she walked the red carpet in the sparkly thigh-skimming number, which featured a checked pattern, button detailing and a bold silver and black belt.

The Pirates of the Caribbean star finished the look with a pair of black shoes and nude fishnet tights while accessorising with silver earrings and a black handbag.

She styled her brunette tresses in a half-up, half-down style while finishing off the wavy look with a black bow.

Penelope Cruz looked younger than ever

Penelope Cruz put on a rather leggy display in a black bouche mini dress, which perfectly showcased her enviably toned pins. The actress looked great in the thigh-skimming number as she posed for photographers at the event.

Penelope Cruz showed off her sense of style

Penelope Cruz highlighted her flawless complexion with her ageless makeup palette. She went for a bold smokey eye, paired with a glossy lip, showing off her young appearance.

Penelope Cruz kept accessories to the minimum, not to distract from her killer mini dress and show stopping pins. She also wore a black bow in her hair to perfectly hold in her clipped-back brunette locks.

Penelope Cruz admitted in a recent interview that she has changed her approach to acting since welcoming her two children: Leonardo, 11 and daughter Luna, nine, with her husband of 12 years Javier Bardem. She said to the Spanish Vogue: “Your life is greatly altered by becoming a mother, much more than with any type of project. I used to think that the more I suffered, the better the performance was going to be.”

Penelope Cruz admits to focusing on her “imagination” when acting

Penelope Cruz continued to Spanish Vogue: “But once I had my kids, I decided to work more with my imagination and less by forcing anything from my real life. In my 20s or in my 30s, before I was a mother, I would force a little bit of my personal traumatic experiences. Now, I feel like that doesn’t necessarily make the result better – but it does make your life more healthy to separate fiction and reality.”