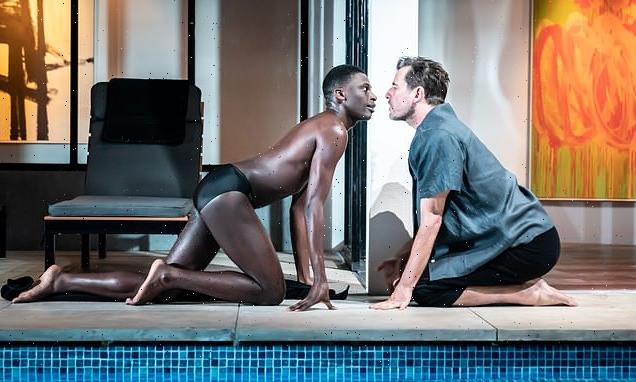 My sinking feeling about sex in a swimming pool: PARTICK MARMION reviews Daddy

Readers may recognise Claes Bang from the BBC’s epic Dracula series, in which he played the vampire of legend.

Well, here he is again, in the kind of guise the unholy count might assume today: a Californian art dealer, living in idle luxury beside a sun-drenched swimming pool.

American writer Jeremy O. Harris’s melodrama aspires to be a hallucination, in which Bang’s billionaire sybarite Andre picks up a young gay black artist, Franklin, at a nightclub. 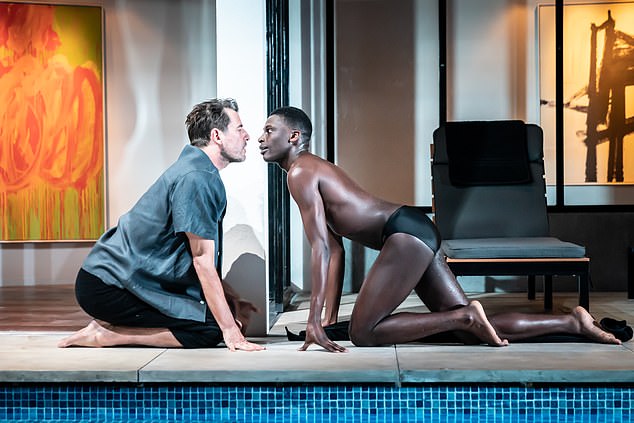 Pool party: Claes Bang as the predatory Andre and Terique Jarrett as his prey Franklin

They make a vaguely Faustian pact for the price of Franklin’s soul, snuffle some drugs and have sex in the pool.

Later, Andre and Franklin dance around the swimming pool, while singing George Michael’s Father Figure. A trio of gospel singers appear, as Franklin’s Bible Belt mom heads over to teach the boys some Old Testament truths.

And so it goes: at first whimsically surreal, then monotonously self-indulgent as the cast get in and out of the real, on-stage swimming pool and splash the audience, presumably to ensure we’re still awake.

One character sums up the action very precisely as ‘a narcissistic wet dream’. 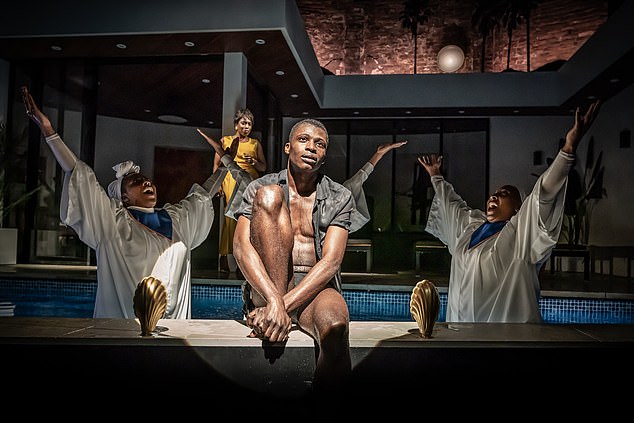 A trio of gospel singers appear, as Franklin’s Bible Belt mom heads over to teach the boys some Old Testament truths

The best seat in the house

Bang is not much tested as Andre, although he does have some challenging changes between Gucci costumes; and anyone interested in a full frontal assessment of his birthday suit will not be disappointed.

Otherwise, this is a creepy snake of a man, manipulating Terique Jarrett’s Franklin, calling him ‘little Naomi’ (Campbell) and licking his legs.

His character has unexplained panic attacks when his phone rings and appears generally purposeless and lost.

Neither he nor anyone else is changed by anything that happens on stage over three hours.

The only character who comes close to creating interest is Sharlene Whyte as Franklin’s God-lovin’ preacher woman Mom, who Andre attempts to buy off with a Birkin bag.

But the play feels like a hoax, aimed at what producers must hope will be gullible audiences. Director Danya Taymor and her team will doubtless find such criticism predictable; but they should also ask if it has some substance.

The veteran showman plays Professor Richard Myers, an American doctor suffering from Parkinson’s disease whose family gather in New York to celebrate his winning an award for his work in IVF.

Alexis Zegerman’s play labours to be an old-fashioned drama, in the vein of Arthur Miller’s Death Of A Salesman or Anton Chekhov’s The Cherry Orchard.

Sadly, it lacks a dramatic motor and Lindsay’s doctor is merely an irascible egotist who remains unperturbed by any of the play’s weak revelations. 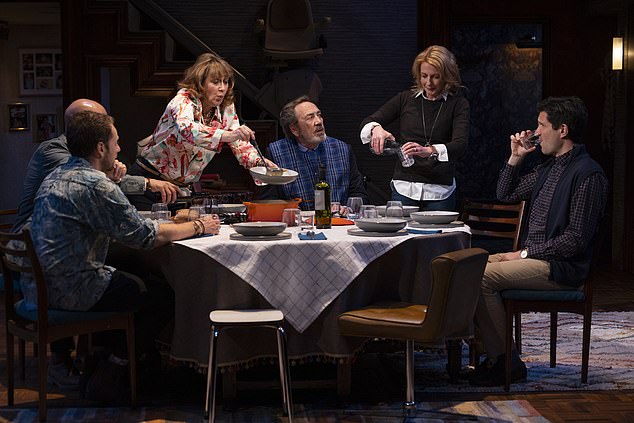 Robert Lindsay plays Professor Richard Myers, an American doctor suffering from Parkinson’s disease whose family gather in New York to celebrate his winning an award for his work in IVF

Inevitably, he wins sympathy with a skilful impression of the slurring and shakes that come with his degenerative disease.

Otherwise, Zegerman fills her play with chat about genetic science, in an effort to illustrate themes of succession in which the Professor’s children are meant to embody his flaws.

Alexandra Gilbreath generates some warmth as Lindsay’s chatterbox wife. But over the course of nearly three hours, her subservient role fizzles out, leaving us only with puzzling loose ends.

The Homecoming (Theatre Royal Bath, on tour to May 21)

Harold Pinter’s 1965 play, The Homecoming, is as provocative as it ever was — albeit differently — nearly 60 years on.

Younger audiences may be as appalled by the clouds of cigar smoke as by the notion that a mother may abandon her children in order to fulfil the sexual fantasies of her dysfunctional, testosterone-obsessed, neanderthal in-laws.

Like all Pinter plays, it is an ugly power-struggle and a tale of the unexpected.

The situation is this: Teddy (Sam Alexander), now a philosophy prof in the States, brings his elegant wife Ruth to meet the family in Sixties Hackney. 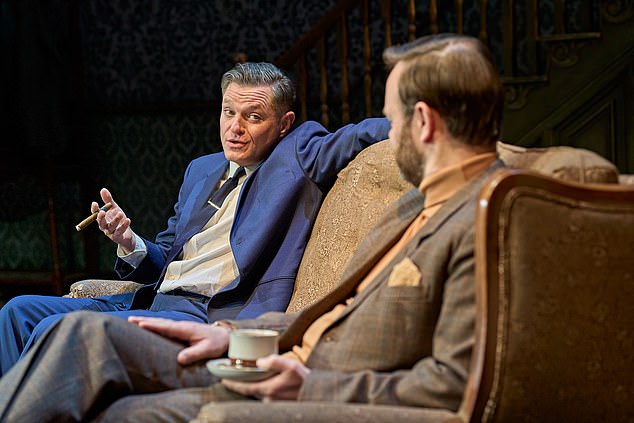 Slick: Mathew Horne and Sam Alexander. Harold Pinter’s 1965 play, The Homecoming, is as provocative as it ever was — albeit differently — nearly 60 years on

Keith Allen plays Max, ex-butcher and patriarch, as an erratic, snarling Steptoe. Just as he remembers his wife Jessie as a ‘s**t-b***h’ with a ‘heart of gold’, so he variously puts-down and bigs-up his sons, Lenny, a stunningly saucy, slick, sly and psychotic Mathew Horne; and Joey (Geoffrey Lumb), the dim demolition worker and failed boxer.

All are wildly over-excited by this sleek female intruder.

In a particularly tingling scene, Ruth turns the conversation to her lips: ‘Perhaps the fact that they move is more significant…than the words which come through them.’

Suddenly all eyes are glued to her mouth. Lenny snogs her.

Joey pins her to the grubby brown settee. No one reacts. Shanaya Rafaat’s unreadable Ruth remains supercool, unresisting and responsive but on her own terms.

Presented with the proposal that she is put on the game in Soho to pay for her upkeep, she simply demands three rooms and a maid.

So what is it all about?

An extreme and somewhat incredible exhibition of male fantasy and female emancipation, perhaps.

But as Ruth, simultaneously Madonna and wh***, takes possession of Max’s chair, with Joey worshipping at her feet and Max begging for pity, there is something awesome about her control over this company of pathetic men.