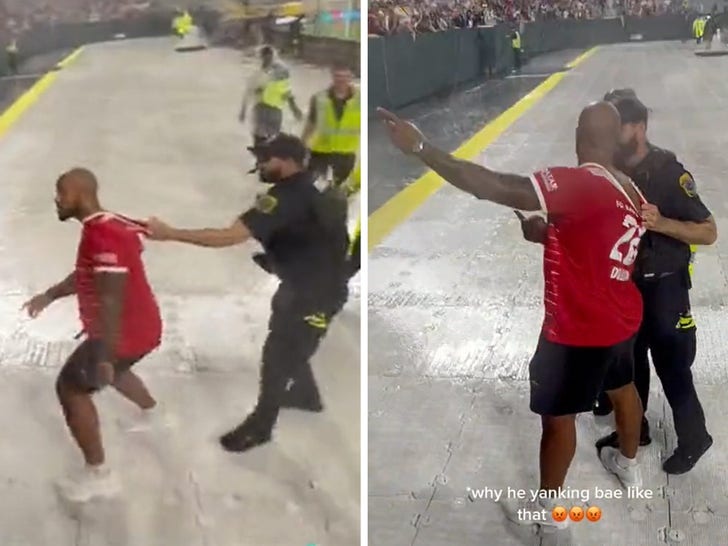 A cop forcefully grabbed Green Bay Packers star AJ Dillon and shoved him in the back during a soccer game at Lambeau Field this weekend … and now, police say they’ve launched an internal review into the matter.

The incident happened on Saturday — when during a weather delay at the Manchester City vs. FC Bayern match, Dillon hopped down onto the field in order to rile up fans in attendance.

According to Dillon, two security guards gave him permission to be on the field, and even helped him get down from his seat “so I could do a lambeau leap and hype up the crowd.”

But, videos show one cop apparently didn’t get that message — and got physical with the tailback as he was preparing to jump over the wall behind one of the end zones.

The cop eventually let go of the 24-year-old — who later said despite the aggressive nature of the interaction, he wasn’t upset about it at all.

“Just miscommunication between parties,” Dillon wrote on his Twitter page on Sunday. “The @GBPolice are great people and I’m glad we have them down there for our games to keep us safe. Standing there in the pouring rain with all those people it’s hard to know what’s going on with just one. All good.”

A spokesperson for the Green Bay Police Dept. tells TMZ Sports … “It is clear that there was a miscommunication between the Officer and Mr. Dillon.”

Dillon, meanwhile, is slated to report to Packers training camp this week — and is expected to have a huge role in the team’s offense this year.