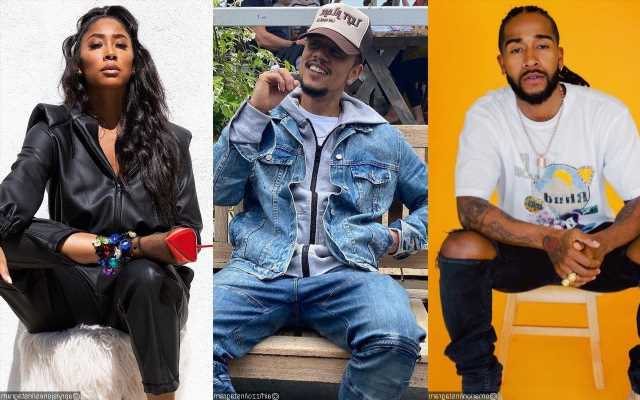 After Fizz, J-Boog and Raz-B appeared on ‘Drink Champs’ to discuss their animosity with Omarion among others, O shares his side of the story on ‘The Breakfast Club’.

AceShowbiz -The B2K saga has yet to be over. After Lil Fizz, J-Boog and Raz-B appeared on “Drink Champs” to discuss their animosity with Omarion among others, the latter shared his side of the story on “The Breakfast Club”.

In an episode of the radio show, host DJ Envy asked Omarion if he knew about Fizz and his ex and baby mama Apryl Jones‘ relationship before it hit the airwaves. “Yeah, I knew. I heard,” O said.

“You know, it really turned up my unbothered because… No, it did in a whole ‘nother way, because I knew that what he was doing was on purpose and it didn’t really prove anything,” he continued. “It didn’t really prove anything because at the end of the day, you have to recognize that people make their own choices, and most of the time, it don’t even have nothing to do with you. So, he made that choice and I don’t think it was the smart choice.”

Charlamagne Tha God then asked Omarion if he ever asked Apryl why she decided to pursue a romance with Fizz. “Yeah, man. Yeah. I asked that many times, because I can’t put-for the sake…understand,” he shared. “But from her perspective, someone that’s hurt, hurt people hurt people. Some people just take it to another level and she definitely took it to another level.”

The host noted that Omarion might easily dismiss the matter if he and Fizz weren’t that close, but it’s another story with Apryl, who shares a kid with O. “I mean, anybody that’s around me, anybody that I invite into my space, I’m obviously comfortable with them,” O responded. “To say that we ain’t close-because this was like, early on when I invited-and this will probably be the last time I speak about this… But when me and Fizz linked back up it was like definitely some synergy. He was definitely in a different personality. I would say that he was more like, humble.”

Omarion went on to share that at one point, he and Fizz tried to rebuild their friendship and “brotherhood.” He explained, “He came over when me and Apryl was in a relationship. His invitation to be on ‘Love & Hip Hop’, all of that, so that’s why I said it turned up my unbothered because I knew that it was intentional. What you did was destroy something that, you know…one apology is not enough.”

Fizz and Apryl broke up long ago and he apologized to O at the “2021 Millennium Tour” last October, admitting to his bandmate that he was “f**ked up.” He said at the time, “I did some f**ked up s**t to my brother. I did some snake a** s**t, and I’m not proud of it. So, I want to sit here humbly and sincerely apologize to you for any turmoil or dysfunction I caused between you and your family.”

Things, however, went sour once again as the two seemingly shaded each other on social media earlier this year. “Never let lame s**t make you do lame s**t. Stay solid,” Omarion wrote on July 8. Seemingly responding to the post, Fizz followed it up with a cryptic post that many believed was a dig at Omarion. “If the shoe fit buy two pair. Lame a** n***a…,” so he said roughly an hour later.