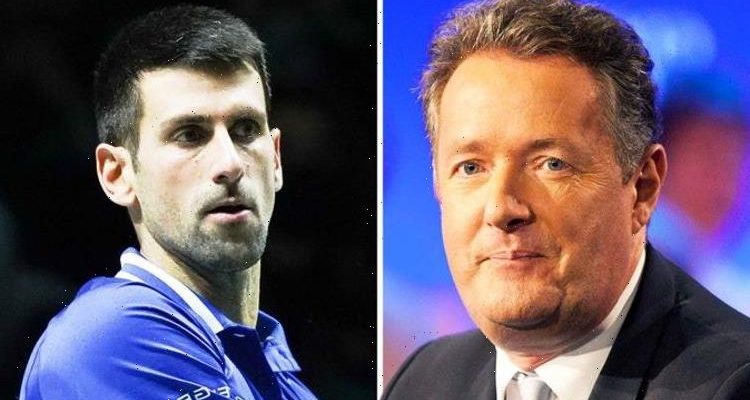 Piers Morgan, 56, reacted to a photograph of Novak Djokovic surrounded by young tennis players which was shared the day after his lawyers claim he tested positive for Covid.

The photograph was taken at an awards ceremony in Belgrade, Serbia, and Djokovic can be seen standing with young people who are holding tennis trophies.

It is unclear when the event took place, but the photographs were shared by the Tennis Association of Serbia on December 17, as reported by Sky News.

Djokovic’s lawyers say he had tested positive for Covid a day earlier.

They are reportedly planning to use the test in question to validate Djokovic’s medical exemption which would enable him to enter Australia without being vaccinated.

Upon hearing the news, Piers Morgan took to Twitter to jibe at the tennis champion.

The journalist wrote: “‘Oh what a tangled web we weave when first we practice to deceive…”

Piers has previously praised Australia for denying Djokovic’s entry into the country.

The 20-time Grand Slam winner is still being held in a Melbourne detention centre after his visa was cancelled upon arrival into the country.

He was told he didn’t meet the country’s entry requirements due to his vaccine status.

Djokovic has not revealed whether he has been vaccinated or not, although he has been critical of mandated vaccines in the past.

Court documents released on Saturday claim Djokovic had Covid last month which gave him “medical exemption from Covid vaccine” and should have been able to enter the country.

His lawyers have told the Federal Circuit and Family Court of Australia that as a result, he should be allowed to leave immigration detention and play in the Australian Open this month.

A judge will decide Djokovic’s fate on Monday, as he eagerly awaits whether he can defend his title or face deportation.