Ulrika Jonsson, 54, woke up with a heavy head and “not feeling too clever” after she left “young guys traumatised” last night. The popular TV star admitted her own son was left feeling troubled by her late evening antics, as she appeared to regret her actions on social media.

Sharing an insight into her weekend activities, Ulrika posted an Instagram Story while in bed to her 197,000 followers.

She typed: “Not feeling so clever this morning.”

“Thinking about those two young guys we traumatised…granted one of them was my son.”

To try and recover Ulrika tucked into a toasted ham and cheese sandwich paired with a fried egg. 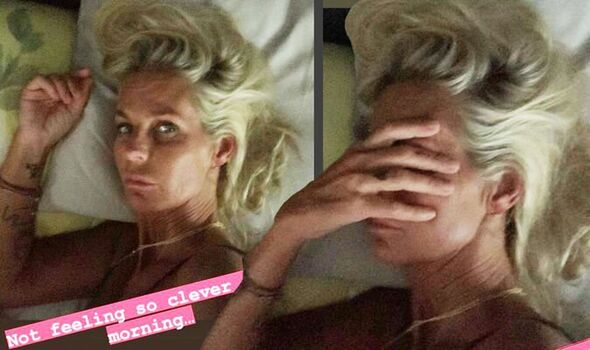 The TV personality was most recently married to American advertising executive Brian Monet, for 11 years before splitting in 2019.

The couple were married for three years until they decided to part ways in 2006.

Ulrika was also married to John Turnbull for five years before splitting in 1995 and have son Cameron, 26, together.

The star slammed double standards when it comes to men and women having a number of children by different people.

The Swedish TV presenter took to her column to rally against the “inequitable treatment of women”, as she confessed that she’s been shamed for having four children by four men.

Ulrika made the observation as she reflected on the fact that Tesla founder Elon Musk has 10 children with three women.

It was recently claimed that the billionaire fathered twins with one of his top executives.

He also has five children with his first wife, Justine Musk, welcoming twins in 2004 and triplets two years later.

They also shared a son who heartbreakingly died of sudden infant death syndrome at 10 weeks old.

However, Ulrika was quick to write that his 10 children by three women was seen as acceptable because of his gender.

She explained: “We can skim over his seed-sowing ways because, quite frankly, that’s what men do.

“These are just men ‘doing their thing’.”