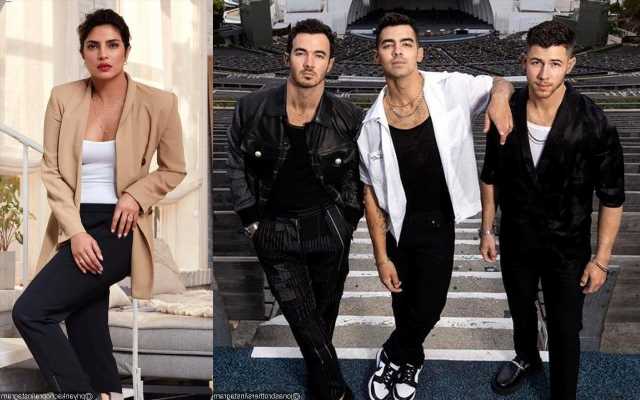 Speaking out about the incident that left him with a cracked rib, the one-third of the Jonas Brothers claims to be ‘recovering nicely’ to the point that he is ‘surprised’ at how good he feels.

AceShowbiz –Nick Jonas has unveiled which one of his famous brothers he chose to break bad news to Priyanka Chopra. A little over a week after suffered a cracked rib from a bike accident, the season 20 coach on “The Voice” admitted that he chose eldest brother Kevin Jonas over Joe Jonas to inform his wife about the situation.

While making an appearance with his brothers on “The Late Late Show with James Corden” on Wednesday, the 28-year-old recounted the tricky moment. To host James Corden, he confessed, “It was a test of a lot of things. Trust, I think, is the biggest thing. So it was a choice between Joe and Kevin. Who [do] you give your phone to call your wife in a time of crisis?” He then spilled, “I gave it to Kevin.”

“It’s kind of telling,” Kevin in return proudly bragged with a smile on his face. Offering more details on what happened after his accident, Nick spilled, “Basically I was there, and the medics were kind of attending to me. I was about to be put on the gurney to get into the ambulance, and obviously I had to call Priyanka, my wife, to say this has happened. But obviously I wasn’t really in a spot where I could talk to her.”

On how he himself reacted to the accident, Kevin reflected, “I was really calm, collected, I think it has something to do with being a father, seeing children fall all the time.” Nick then quipped, “I love how he’s equated my rib breaking and the whole thing to just me falling.”

“Well, [children] fall on their bikes, it’s a big deal in the moment, but if you get freaked out then they get more freaked out, so I try to stay extremely calm,” Kevin tried to send his point across, prompting Joe to chim in, “You told Nick, ‘Just walk it off, you’ll be fine.’ ” Nick then jokingly replied, “And I have the same emotional maturity as his five-year-old.”

Assuring that he is recovering well, Nick stated, “I’m feeling amazing, I’m surprised at how good I feel.” He went on to spill, “Right after it happened I had to be okay because I was doing ‘The Voice’ and a couple other things. It just somehow healed up pretty fast.”

On what caused his accident, Nick spilled, “Something just got caught, dirt on the bike, and [I] just tumbled.” He added, “A little spill. A fractured rib and some other bumps and bruises, but I’m feeling really lucky. It probably could’ve been a little worse. All is good. I’m recovering nicely. I’ve got a lot of support around me and I appreciate everyone’s well wishes. It means a lot.

Nick cracked his rib while on the set of “Olympic Dreams Featuring Jonas Brothers” on Saturday, May 15. The “Spaceman” singer was taken to the hospital by ambulance following the incident, and was already back home by Sunday night. Upon his return to “The Voice”, he said, “[I have] a cracked rib from a spill on a bike and a few other bumps and bruises. I just wanted to go ahead and say that in case I’m not as physically enthusiastic as I usually am.”