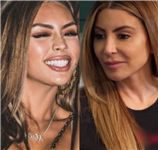 Some people were excited about the pairing. Malik’s wife was not one of htem.

Malik issued a public apology to his estranged wife, and not just for the cheating.

As for his wife … she is making her feelings towards Larsa known, and boy, they are hostile.

Monday was when Malik Beasley made his apologetic overture to Montana Yao, his estranged wife.

He was apologizing for his relationship with Larsa Pippen.

Malik and Larsa were first spotted together in the autumn of 2020.

They have obviously broken up since then.

But not before Montana filed to divorce Malik, a filing made in December.

She accused Malik of kicking her and their son, 2-year-old Makai, out of her home.

Obviously, she also accused him of cheating on her.

Now that Malik has issued this public apology, Montana is responding — also publicly.

To start, Montana says that she and their toddler son “appreciate Malik’s apology.”

“It’s hard to own up to bad decisions and apologize especially publicly,” she acknowledged.

“My main priority has been and will forever be my son,” Montana wrote.

“So I’m glad if/when he looks back on all of this one day,” Montana continued.

She hopes that “he can see his dad publicly apologized to us for publicly hurting us.”

Montana referred to Malik’s apolgoy as a “step forward in healing.”

Monata wrote that she hopes that they can “all move forward away from the anger and hurt.”

She wishes “to be able to raise [Makai] with love, respect, and happiness on both sides.”

But her “both sides” line is about her and Malik … because she has very different feelings about Larsa.

Montana then lashed out at Larsa, dragging ther RHOM alum for her age and celebrity antics.

She accused Larsa of not honoring the unwritten “girl code,” part of which involves not enabling cheaters, one supposes.

In fact, Montana declared that Larsa wouldn’t recognize this code of ethics if it “slapped” her in the face.

“You need clout that bad at your age?” Montana asked, rubbing in their age gap.

“All those fillers and surgery can’t fix that insecure soul,” Montana jabbed.

“Go work on yourself, read a book, something to better your life,” she suggested.

Taking another apparent swipe at Larsa’s age, Montana added: “While you still have the time …”

Larsa did issue a public response.

She noted that she could “spend the day going back and forth,” but did not want to.

“Woman to woman, I would never do that,” Larsa wrote, “especially over a man.”

Instead, Larsa said that she merely wished to “clear up some of the misinformation” in Montana’s post.

She wrote that Malik “cried entirely too much.”

She also slammed him as “cheap,” though he has an estimated net worth of $6 million.

Larsa then offered some “womanly advice” to the woman who had taken shots at her.

“If you ever find another man who wants you for you and not all the free press I’m giving both of you, lock him down,” she suggested.

Acording to Larsa, “Malik was a clout chaser who pursued me relentlessly before I even knew you existed.”

“And I have all the DM’s but then again, he knows that,” Larsa commented.

Of course, it did not end there.

Montana very clearly did not believe Larsa’s version of events, challenging her to “get your story straight luv.”

Montana accused Larsa herself of being the “clout chaser.”

She said that she, meanwhile, built her own life “off my OWN name,” not off of her estranged husband’s.

Montana also had even more things to say about Larsa’s appearance and age, which … yeah, the bitterness is on full display.