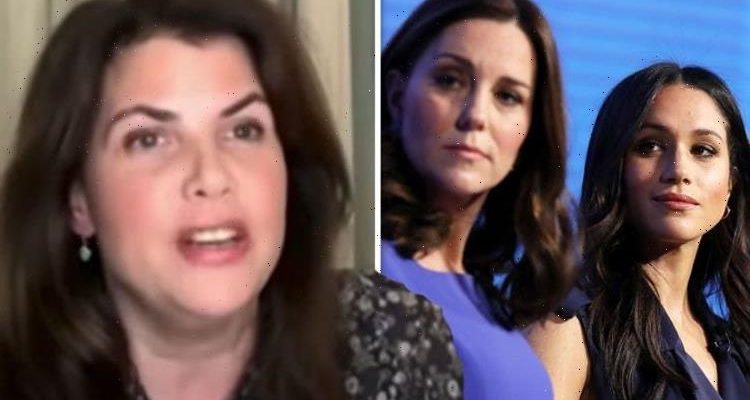 Location, Location, Location presenter Kirstie Allsopp, 50, has shed some light on Meghan Markle’s claims that Kate Middleton, 39, made her cry during an argument in May 2018. The Duchess of Sussex opened up about the row during her bombshell interview with Oprah Winfrey earlier this year.

However, Kate’s friend Kirstie has now claimed that Meghan failed to tell Oprah that their disagreement was about the former Suits actress’ alleged “bullying” of staff at Kensington Palace.

Kirstie has claimed the Duchess of Cambridge “confronted” Meghan at the time after hearing she was “being rude” to staff.

Kirstie told the Telegraph: “Kate never ever loses her temper, but she found out Meghan was being rude to staff at Kensington Palace and she was angry with her.

“Then, Kate burst into tears because she’d lost control and she did take Meghan flowers to try and patch things up.”

Meghan was accused of “bullying” aides at Buckingham Palace when she was a senior member of the Royal Family, after marrying Prince Harry.

The Duchess denied the accusations in a statement to royal reporter Omid Scobie.

It read: “The Duchess is saddened by this latest attack on her character, particularly as someone who has been the target of bullying herself and is deeply committed to supporting those who have experienced pain and trauma.

“She is determined to continue her work building compassion around the world and will keep striving to set an example for doing what is right and doing what is good.”

Meghan and Harry’s team also denied the allegations in a statement to The Times, which said: “Let’s just call this what it is—a calculated smear campaign based on misleading and harmful misinformation.

“We are disappointed to see this defamatory portrayal of the Duchess of Sussex given credibility by a media outlet.”

Kirstie’s claims come after it was reported that the relationship between Meghan and Kate has become strained over the years.

In 2018, it was reported that Meghan also made Kate cry over her demands for Princess Charlotte’s bridesmaid dress ahead of her royal wedding to Prince Harry.

Meghan later denied these claims in her interview with Oprah, saying “the reverse happened” and that Kate had apologised to her for making her cry.

Elsewhere, Meghan recently won the latest stage in her legal fight in her privacy and copyright case.

In October 2019, Prince Harry announced that his wife had launched the case against Associated Newspapers.

Extracts from a letter Meghan had written to her estranged father, Thomas Markle Sr, in 2018 were published in five articles by the Mail on Sunday and MailOnline in February 2019.

This week, it was revealed that the former Suits actress has triumphed in court as judges ruled against overturning the previous High Court ruling over her letter to her estranged father.

Today, judges dismissed the publisher’s appeal to go to trial in a ruling this morning.

Following the ruling, Meghan issued a statement on her “victory”.

It read saying: “This is a victory not just for me, but for anyone who has ever felt scared to stand up for what’s right.”