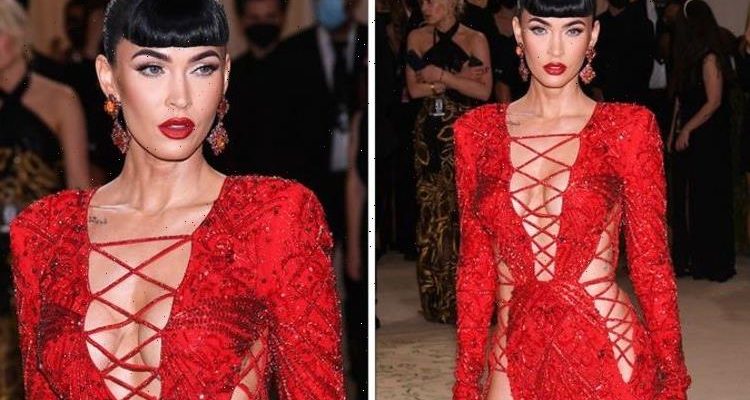 Midnight In The Switchgrass: Megan Fox stars in crime thriller

Transformers actress Megan Fox, 35, has put on a leggy display in a plunging red gown at New York’s City’s most prestigious fashion event of the year. The Hollywood star made her Met Gala debut in a gorgeous cherry dress that skimmed the floor while highlighting her stunning figure, just hours after donning a daring sheer number at the 2021 MTV Video Music Awards.

I feel like I’ve always leaned into it, I’m not afraid to be sexy

Wearing a dress designed by fashion house Dundas, Megan stunned as she walked the red carpet.

With criss-cross panels across her chest and thighs, the Jennifer’s Body star brought the drama as she jutted her left leg through the slit of her gown.

Keeping her make-up inline with her outfit, Megan opted for a statement red lip and light, smokey eye.

She opted to keep her accessories simple with a glamorous pair of amber earrings and coordinated heels.

Megan also showed off a sharp, blunt fringe and had the rest of her hair swept up and away from her face, in a look that had been inspired by Bettie Page’s iconic look in Cry Baby.

Addressing the evening’s theme In America: A Lexicon of Fashion, the star said: “I guess because it’s an American girl and that makes it American fashion.”

She also gushed over the “craftsmanship” of the design, branding it “incredible”.

Speaking about her signature looks, Megan said: “I feel like I’ve always leaned into it, I’m not afraid to be sexy.”

She also told red carpet reporters: “It’s like a Michael Jackson concert. Everybody is so excited to be out of the house.”

The star’s look was worlds away from her appearance at the MTV Video Music Awards on Sunday, where she graced the red carpet with her beau Machine Gun Kelly.

Wearing a sheer midi dress, the star kept her modesty with a metallic underwear set.

This year is the first time the star has attended the prestigious event that is a fundraising benefit for the Metropolitan Museum of Art.

Founded by Eleanor Lambert in 1946, the first event was held two years later and organised by Vogue magazine.

The fundraiser for the arts was cancelled last year due to the coronavirus pandemic.

It was then dealt a double blow when it was moved from its traditional slot from the first Sunday in May to September.

Also in attendance was US Open winner Emma Raducanu, singer Billie Eilish and reality star Kim Kardashian among many others.

But in order to gain access to the coveted event, guests had to be vaccinated.

A spokesperson for the Met said last month: “Currently, all attendees at The Met Gala on September 13 must provide proof of full vaccination and will also be expected to wear masks indoors except when eating or drinking.”