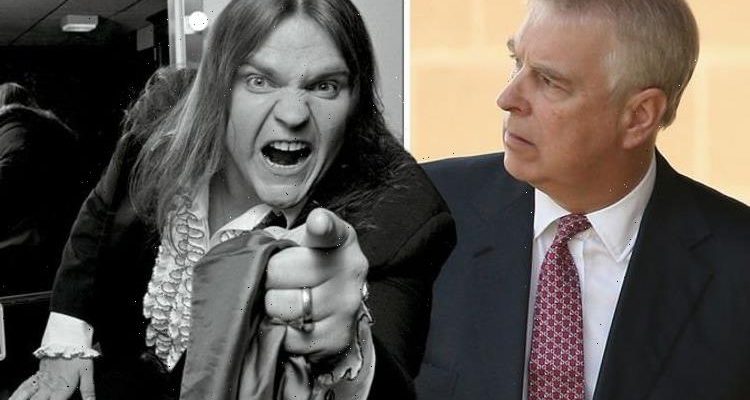 Meat Loaf, the singer famous for hits such as Dead Ringer For Love, Bat Out Of Hell and I’d Do Anything For Love (But I Won’t Do That) has died aged 74. Real name Michael Lee Aday, the performer has sold more than 100 million albums worldwide while also enjoying success in Hollywood. A statement released today said: “Our hearts are broken to announce that the incomparable Meat Loaf passed away tonight with his wife Deborah by his side. Daughters Pearl and Amanda and close friends have been with him throughout the last 24 hours. “His amazing career spanned six decades that saw him sell over 100 million albums worldwide and star in over 65 movies, including Fight Club, Focus, Rocky Horror Picture Show and Wayne’s World.

“Bat Out of Hell remains one of the top 10 selling albums of all time.”

Meat Loaf’s interesting life took him to a myriad of places and people, even including the Royal Family.

He met the royals while appearing on ‘It’s a Royal Knockout’ in 1987.

The show was a one-off charity event staged on the lakeside lawn of the Alton Towers stately home and theme park.

Celebrity contestants competed in numerous games; for example, in one round, the players dressed up as giant vegetables and threw fake hams at each other.

Meat Loaf was on the Duchess of York’s team, and it appeared Sarah Ferguson was at the centre of tension between the singer and Prince Andrew.

In a 2003 interview with The Guardian, Meat Loaf explained: “It was great fun. I had a great time.

“Fergie wasn’t exactly flirting with me, but she was paying attention to me, and I think Andrew got a little ‒ I could be wrong, I’m just reading into this ‒ I think he got a little jealous.

“So I turned around and I grabbed him and he goes, ‘You can’t touch me. I’m royal.’

Meat Loaf was also asked about the Queen – he simply responded: “Oh, the Queen hates me.”

The 1987 show raised lots of money for charity, but was considered a misstep by some critics.

Ingrid Seward wrote in her 1995 book ‘Prince Edward: A Biography’ that there was a “lingering feeling of incredulity blended in equal measure with embarrassment”.

The book, published in 1995, claims that the Queen Mother was “most upset” at this “disastrous” programme.

She was “upset” that the Royal Family had involved themselves in “that hour-long exercise in televised kitsch”.

Ms Seward said: “She has a tendency to position herself well above the irritations of everyday life”.

She added: “The Queen did not appreciate the sight of the Duke of York grinning inanely.

“His wife [Fergie] rushing around waving her arms like a footballer who had just scored a goal.

“And her youngest son Prince Edward dressed as a joker with a yellow plumed hat which made him look, as The Times drolly remarked, like ‘one of Shakespeare’s lesser jesters’.”