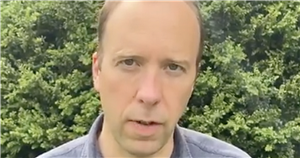 Matt Hancock could miss out on doing the famous Bushtucker Trials on I'm a Celebrity… Get Me Out of Here! due to a secret health condition.

The Tory MP is a sensational booking for the hit ITV show, and the public have already made it clear that they will be voting in their droves for him to do the Bushtucker Trials when he appears in the show, which starts on Sunday, 6 November.

The previous record held for the celebrity voted to do the most trials in the show was record producer Naughty Boy, who had to complete seven in 2021, despite being the fourth contestant to be voted out.

Whilst the public are hoping to top that record, The Sun reports that Matt may not be able to do some of the trials, after he contracted trench foot whilst filming Celebrity SAS Who Dares Wins.

A source said: "When he was filming SAS Who Dares Wins in October, Matt got trench foot – in fact, a lot of the cast did. It can take up to six months to recover from that, so any water-based tasks or swimming trials would be bad news for his feet."

Trench foot is caused by prolonged exposure to a cold temperature that is usually above freezing and damp, sometimes unsanitary conditions.

It should clear up in one to three days, however, if untreated, it can take up to six months to get rid of symptoms.

Matt is due to star in the 2023 series of Celebrity SAS, however, it's been reported that he has angered bosses of the show – who considered him their "star signing" – after he signed up for I'm A Celebrity.

A source told The Sun: "Matt was the star signing for SAS Who Dares Wins but now he's on I'm A Celebrity it has poured cold water all over it. He will be on air on ITV's biggest show for a month.

"'Obviously no one working on SAS is impressed as it really takes away from their show and it looks like they signed him after I'm A Celebrity – which isn't true.

"'Everyone is pretty angry about what has gone on and it's not the best move Matt could have made."

Despite backlash from fellow MPs about signing up to I'm A Celebrity, Matt has insisted that his appearance on the show is because he wants to “go where the people are” to promote his upcoming dyslexia campaign.

Now the MP for West Suffolk has hit back at the haters and said it’s important that he talks directly to those who “aren’t always interested in politics”, who he presumes to watch the Australian-based game show.