And yet walking the course or visiting the spectator village this week, it all seems so familiar to an Open regular, from the grandstands to the cavernous media tent to the two imposing yellow scoreboards that face each other across the 18th green.

“What they’ve done here is quite extraordinary isn’t it?” David McCombes said as he directed his young staff deep inside one of the multistory scoreboards, which are still operated manually.

McCombes is a history teacher at Charterhouse School, an English boarding school in Godalming in Surrey, England, whose students and alumni have been updating the scoreboards by hand since 1979. The opposite scoreboard is manned by representatives from rival Cranleigh School.

Each school attempts to post updates the old-fashioned way ahead of the other. Despite the Open’s return to Northern Ireland, the rivalry and the scoreboards, which are stored in Liverpool the rest of the year, have made the journey across the water.

“It’s been a bit more of a logistical challenge this year, getting over here with the transports and costs,” McCombes said. “But we’ve managed it, and it’s been good. We’ve got nine kids with us this year, where normally we would have between 12 and 15, so we’re all working a bit harder. The stress of it is quite good fun.”

The nine other courses in the Open rotation are on the British mainland. Much of the material used to build the Open’s temporary infrastructure is transported by road — sometimes quite a long road if material is brought from southern England to Scotland.

“Every Open championship venue has its unique challenges,” said Johnnie Cole-Hamilton, executive director of championships for the R&A, which organizes the Open. “Royal Portrush is the only one in our pool of venues that has a body of water between us and most of the contractors who are based over in Britain.” 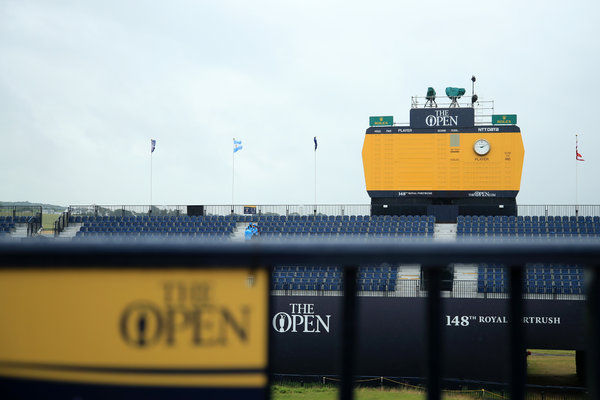 Cole-Hamilton said semitrailer trucks will ultimately complete about 2,000 journeys to provide the infrastructure to Portrush and then remove it.

“A part of the Brexit process is discussion around the movement across the border,” Cole-Hamilton said, adding, “so we just wanted to make sure we got as much stuff over here early in the process to make sure it went smoothly.”

Temporary office structures, tenting and enough grandstands to seat 12,500 spectators were among the items shipped from the British mainland and assembled at Portrush, beginning in May.

“It’s like building a small village on a 450-acre site,” Cole-Hamilton said.

But more permanent changes were also required. New roads had to be built to handle the weight of the trucks.

“The roads raised a few eyebrows,” said Gary McNeill, head professional at Portrush. “They can see all these trucks coming, and if you don’t have that, they will churn up your golf course.”

But no project at Portrush was bigger or more invasive than the destruction of its existing 17th and 18th holes to make way for the spectator village and create more space on the closing holes.

The historic links course, last used for the Open in 1951, was then reconfigured with new 7th and 8th holes constructed close to the ocean, partly on land that had not been used for golf before.

The result — undulating fairways tucked among imposing dunes — is spectacular.

“They are in the most scenic part of the golf course, and they are two cracking holes,” said McNeill, who has been at Portrush since 1999.

In order to use turf that was well-established on site, a sod-cutter sliced two of the club’s existing putting greens into blocks of sod that were replanted to create the new 7th and 8th greens.

The R&A already had experience refitting a traditional venue for the modern era. In 2006, the Open returned to Royal Liverpool after a 39-year absence.

“It’s a real challenge because you get much more of a blank canvas,” Cole-Hamilton said.

But though the R&A did plenty of heavy lifting and investing as it oversaw the changes at Royal Liverpool, it broke new ground at Portrush.

A tunnel system was built in the heart of the revamped course to alleviate congestion and allow players and officials unfettered access between the 8th green and 9th tee and the 10th green and the 11th tee.

“That’s a unique thing for an Open championship,” Cole-Hamilton said. “Essentially we buried a corrugated iron frame in the sand and then they landscaped over and around it.”

The tunnel will be shut when the course returns to normal duty after the Open; Portrush’s members do not need to worry about bottlenecks.

“When the doors are all closed off, I would have to show you where it was because you would struggle to find it,” Cole-Hamilton said. “It was important on such a beautiful landscape to build something that was commensurate with the golf course and blended in.”

But for now Royal Portrush, like all modern-day Open venues, is a flurry of commotion and temporary construction with big crowds and the world’s leading golfers braving the bustle and the elements.

Up high inside the scoreboards on the 18th hole, it is business as usual, as well.

“They still haven’t waterproofed these things,” McCombes said, looking warily up at the rough planks in the ceiling. “So as soon as it starts to rain, it pours right through there.”