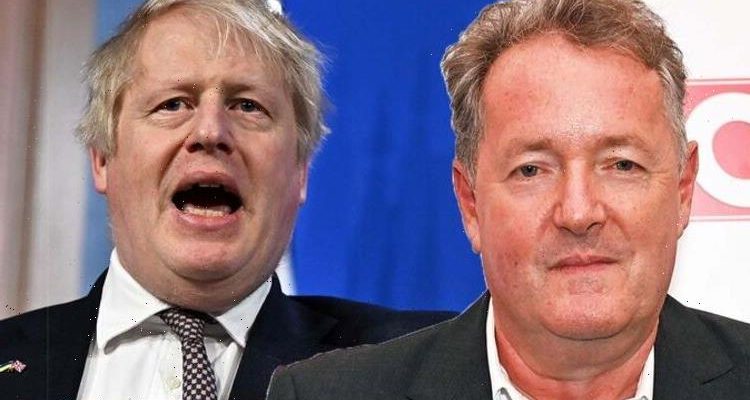 Piers Morgan, 57, praised the Prime Minister’s latest response to the war in Ukraine, which saw him fly to the country to meet president Volodymyr Zelensky. The broadcaster branded Boris Johnson’s leadership throughout the conflict “increasingly impressive” in a Twitter post shared with his 7.9 million followers.

He wrote on Friday: “I’ve been very critical of @BorisJohnson since he became UK Prime Minister, for fully justified reasons.

“But I will say this: his leadership during the Ukraine crisis has been increasingly impressive.

“We need more of this serious & focused Boris – less of the blathering buffoon.”

The tweet came ahead of the Prime Minister’s meeting with Mr Zelensky, in which he and other world leaders discussed Russia’s invasion of Ukraine.

The pair could be seen in a photograph shared by the Embassy of Ukraine to the UK.

In the image, both men sat across from one another in a room adorned with their respective flags.

Details of the visit had not been shared publicly prior to the release of the image.

The picture, shared on Twitter, was captioned with the word “surprise” alongside a winking emoji.

The photo was also shared on Facebook by presidential aide Andrii Sybiha.

He captioned it: “Boris Johnson’s visit in Kyiv began just now with a tete-a-tete meeting with President Zelensky.”

Mr Sybiha described Mr Johnson as “the leader of the anti-war coalition. The leader of sanctions on the Russian aggressor.”

Mr Johnson also spoke out on the briefing, branding Ukraine’s efforts against the Russian invasion “the greatest feat of arms of the 21st century”.

The Prime Minister said: “It is a privilege to be able to travel to Ukraine and meet President Zelenskyy in person in Kyiv today.

“Ukraine has defied the odds and pushed back Russian forces from the gates of Kyiv, achieving the greatest feat of arms of the 21st century.

“It is because of President Zelensky’s resolute leadership and the invincible heroism and courage of the Ukrainian people that Putin’s monstrous aims are being thwarted.”

The Prime Minister continued: “I made clear today that the United Kingdom stands unwaveringly with them in this ongoing fight, and we are in it for the long run.

“We are stepping up our own military and economic support and convening a global alliance to bring this tragedy to an end, and ensure Ukraine survives and thrives as a free and sovereign nation.”

The meeting comes just a day after Mr Johnson spoke at a press conference at Downing Street about the Ukraine war following talks with the German chancellor Olaf Scholz.

The PM pledged to send £100million worth of high-grade military weapons to Ukraine.