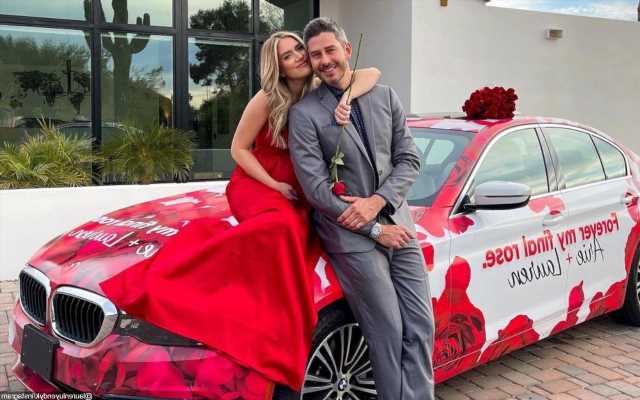 In a new YouTube video, the pair, who welcomed twins Senna and Lux in June, reveal that they haven’t been able to get that rest in the same room after Lauren gave birth to their babies.

AceShowbiz –Lauren Burnham and Arie Luyendyk Jr. are enjoying their role as parents of twins. “The Bachelor” couple, who welcomed twins Senna and Lux in June, opened up about their parenting journey in a new video which they shared on their YouTube channel.

In the new video, the pair revealed that they haven’t been able to get that rest in the same room after Lauren gave birth to their babies. “There are some nights where it is complete chaos,” Arie recalled, adding that the newborns’ sleep habits and various needs caused them to have unsteady sleeping periods.

“One wakes up at 10, then the other one wakes up at midnight, the other wakes up at 2. [Before] you know it, you’ve gone through the whole night and you haven’t slept,” the race car driver, who is also a parent to his and Lauren’s 2-year-old daughter Alessi, continued.

The chaotic night made the couple have to take turns to spend the night in the nursery with the twins. While one is taking care of the babies, the other gets some actual sleep in the room. “We just switch on and off, just to give each other a full night’s rest,” Arie shared. “Then the person who has a full night’s rest handles Alessi first thing in the morning.”

That was not the only challenge they have been facing, but communication and sharing the challenges have been a great help for the couple. “If I’m having a mental breakdown, Lauren picks up the slack. If she’s having a mental breakdown, I get it together and I pick up the slack,” he said. “I think that is what makes us great at [parenting]… we can sense when the other needs a little bit more heavy lifting on the parenting end.”

“We do a good job balancing out,” Lauren added. “We can’t both break down at the same time. One of us has to man up … [and] stop complaining.”

In the Q&A session, Lauren also talked about her recovery after C-section surgery. “Everyone says that it takes longer to recover and maybe my body is recovering. … It was really interesting because for most people they say the C-section recovery is harder. But for me, it was the opposite. I felt like the vaginal birth for me to recover,” she divulged.

Arie and Lauren introduced their newborn twins on Instagram as he shared a picture of his wife holding their infants while she’s in her hospital bed. “Never been prouder of my wife than in this moment. She is the strongest woman I know and I’m lucky to be on this incredible journey with her. We are proud parents of a healthy boy and girl!” Arie raved in the caption on June 15.