Kylie Jenner fueled marriage rumors on Tuesday when she was spotted wearing a mystery band on her ring finger while flying out of Los Angeles!

Did Kylie Jenner and Travis Scott tie the knot? That’s what fans were wondering on Tuesday when the 24-year-old Kylie Cosmetics founder flashed a mystery band on her ring finger as she took a private jet out of Los Angeles with daughter Stormi, 3. The pregnant reality star looked casual in black clothing and Yeezy slides with shots of the possible wedding band in view as she prepared for the flight. CHECK OUT THE PHOTOS HERE!

Although Kylie and her 30-year-old beau have engaged in an on-again-off-again relationship over the years, speculation about the two walking down the aisle has gained some steam in the past few months as the pair continue to grow their family with Kylie’s second pregnancy, confirmed in September. HollywoodLife has reached out to Kylie’s rep for comment on the potential marriage but didn’t receive an immediate response. 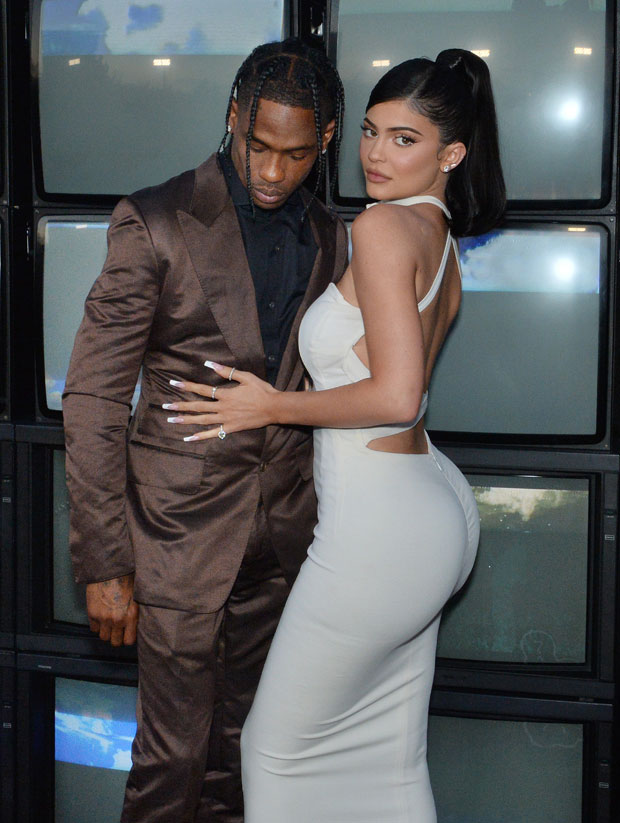 The Keeping Up With the Kardashians alum already sparked some ring hype earlier in the day when she posted an Instagram pic of she and Stormi with some matching massive diamond bling. “[D]daddy got us matching rings,” Kylie wrote in the caption, referring to Travis’ special gift. In addition to loving the diamond sparklers, fans also took notice of a band around Kylie’s ring finger which was ever-so-subtly peeking out beneath her sleeve.

“Hiding what’s on the engagement ring finger #JustSaying,” one fan commented. “I’m seeing a ring on her wedding finger too,” another person wrote. Other followers — like Kylie’s step-sister Khloe Kardashian — took notice of the post. “Daaaaammmmnnnnnnnnn,” Khloe hilariously exclaimed, also writing, “No he did not!!!!!!!!!!!!” Does the KarJenner clan know something we don’t?!

Kylie and Travis broke up around Oct. 2019 after two years of dating and sparked reconciliation rumors with a number of public outings together over the past few months. A source recently told HL that they were not back together at this time, however, despite expecting a second child together. “This has been something they have talked about for close to a year if not longer. She’s wanted a second child for forever.”

Although these reports have kept the relationship status between Kylie and Travis somewhat vague, more recent outings together — plus today’s ring pictures — make us wonder what’s really going on between the pair!