Kourtney Kardashian looked adorable in her little red dress she wore while horseback riding in Mexico with boyfriend Travis Barker.

Kourtney Kardashian, 42, is always dressed for the occasion, horseback riding included. The Keeping Up with the Kardashians star looked remarkable in a sexy little red dress that she wore for the sight-seeing activity with boyfriend Travis Barker, 45, amidst their Mexico vacation. In a video shared by Travis, Kourt could seen rocking her cute attire and her new bob hairdo while delicately riding the horse on the beach. The Blink 182-drummer rode beside his love, and he briefly cut the video to show himself sporting black sunglasses and a white tank-top on his own horse.

Travis’ Aug. 18 post also included footage of fireworks going off in the air from the beach. The lovebirds were nowhere to be seen in the video, but we can assume they enjoyed a romantic moment together while watching the amazing light show. Travis captioned his post, “Mexico” with a face-with-party-horn emoji.

Travis and Kourtney jetted off to Mexico with Kris Jenner and Corey Gamble a few days ago. The foursome have been enjoying some fun in the sun together, and Travis and Kourtney specifically packed on their usual amount of PDA while at the pool at the Las Ventanas al Paraiso resort. They also cozied up to each other on the steps of a spot in Cabo San Lucas, which Kourtney documented on Instagram alongside the caption “yummy.” 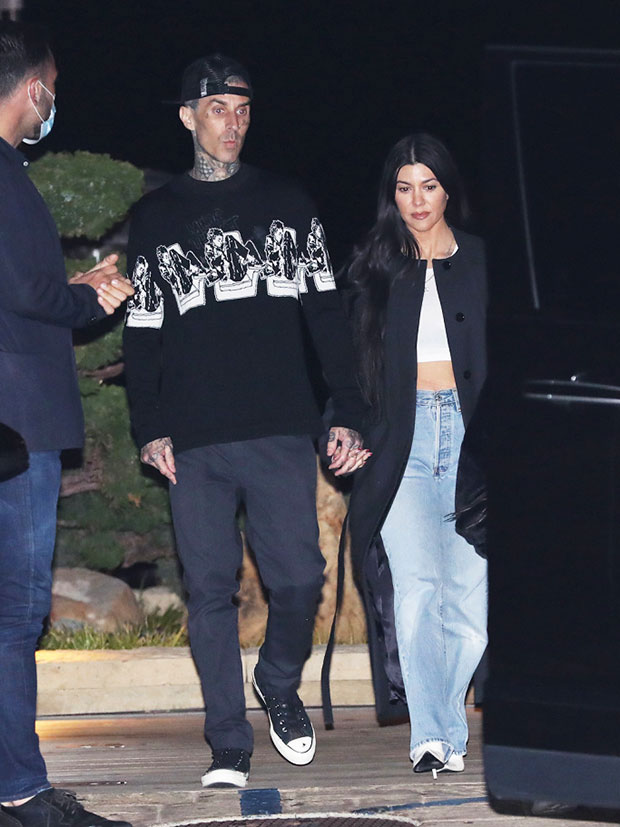 The trip to Mexico was a big deal for Travis. The rocker flew in a plane to get there, something he hadn’t done since he survived a deadly 2008 plane crash that killed four people and left him with third-degree burns on 65 percent of his body. Kourt was a major reason for Travis having the courage to fly again, and he made that clear when he told the POOSH founder “With you anything is possible” accompanied with a photo of Travis cradling Kourt in his arms.

Kourt sent some love back to her beau, writing, “Anything and everything with you,” under Travis’ Aug. 17 post. A source previously told HollywoodLife that Kourt “has gently been trying to get Travis to fly for months,” until she succeeded in doing so a few days ago. “Before the flight, Kourt let Travis know that she’d be there for him with whatever he needed every step of the way,” the source said.