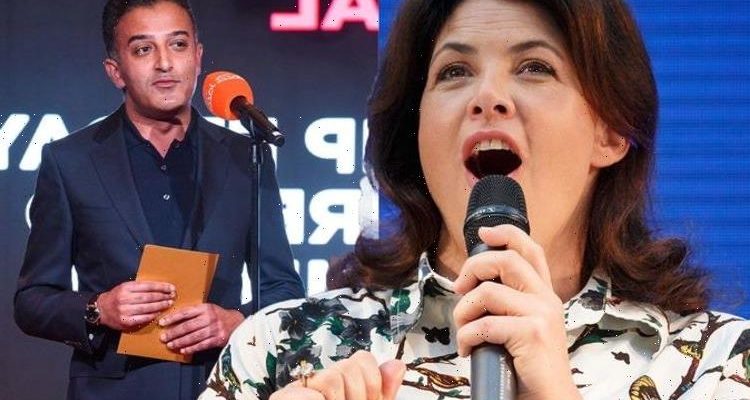 Kirstie Allsopp, 49, has lashed out at Twitter tonight as she claimed it was “no longer” a place for intelligent debate as she questioned comments made by Adil Ray following reports of racism at Yorkshire County Cricket Club. The Location, Location, Location host hit out at the Good Morning Britain presenter as he blasted the “greatest scandal” in sport, after he alleged an Asian player at the club was subjected to their prayer mat being used to clean up a woman’s period.

On his Twitter account, Adil typed: “This is becoming the greatest scandal in sport. Another Asian player claims he was ‘urinated’ on and heard players brag they ‘sh**ged a bird…who was on her period and made a mess’, and all they could find is a Muslim player’s prayer mat to clean it up.

He continued: “Allegations that a Muslim prayer mat was used by Yorkshire Cricket players to clean up the mess from having sex with a woman on her period and players p**sed on an Asian players head are vile.

“We need answers and action now. I fear a DCMS review won’t cut it. This is much bigger.”

However, Kirstie took umbrage with what she perceived to be Adil’s “repugnance” towards menstruation and urged her following to take notice of it.

She typed: “The repugnance towards menstruating women inherent in this must be acknowledged. Two wrongs don’t make a right.

“Things can be racist and sexist. They can be wrong on multiple levels. Highlighting a second wrong, does not in any way lessen the first noted wrong.”

But instead, some of her followers felt her reaction was discriminatory in its meaning and responded to inform her so.

@DrCaitGraves typed: “@KirstieMAllsopp Broadly speaking, you are correct. On this occasion, however, you have made up a wrong that doesn’t exist. And that does suggest you are trying to lessen the first noted wrong.”

While @Jabarn typed: “@KirstieMAllsopp You seem to be wrong on multiple levels.”

Later Kirstie addressed the backlash and felt that the micro-blogging site was no longer a place she could express her opinions.

Bidding farewell to Twitter, the presenter typed: “Twitter used to be a place you could discuss things. I felt @adilray’s repetition of comments that illustrated repugnance towards menstruating women was troubling and I said so to him.

“He said they were ‘quotes’, I said, ‘Use quotations marks’.

“Suddenly that makes me someone who doesn’t care about racism?! This is patently absurd.

“Things can be wrong in multiple ways and it is daft to argue otherwise.

“Bigots don’t pick one thing to be bigoted about and remain paragons of virtue on every other way.

“But Twitter is now full of people who think nuance is a dirty word. Who believes that if they disagree with you on one thing then you must be venal in all ways.

“It’s therefore not, sadly, a place for me. I enjoy debate, intelligent debate and exchanges of views, ideas and perspectives, this is no longer a place for that,” she finished.

It comes as last summer Azeem Rafiq made allegations of institutional racism against Yorkshire Cricket Club during two spells at the club between 2008 and 2018.

The allegations led the cricket club to launch an independent investigation which was completed in September.

On the completion of the report, Yorkshire apologised to Rafiq for being the victim of “inappropriate behaviour” but did not go into detail.