EXCLUSIVE: Kim Kardashian looks tense as she leaves appointment in LA amid marriage woes… before Kanye West brings up how he wanted to abort daughter North AGAIN on Twitter

Kim Kardashian is pictured as she leaves an appointment alone in Los Angeles on Thursday amid a trying time for her six-year marriage to Kanye West.

Dressed in all black, it was a low-key outing for the 39-year-old E! star, who donned a black mask as she left Cedars-Sinai hospital in the Beverly Hills area.

The outing came just hours before Kanye, 43, took to Twitter on Friday to discuss abortion again, referencing his shocking rally speech earlier this month where he claimed he and Kim considered aborting their first born child, North. 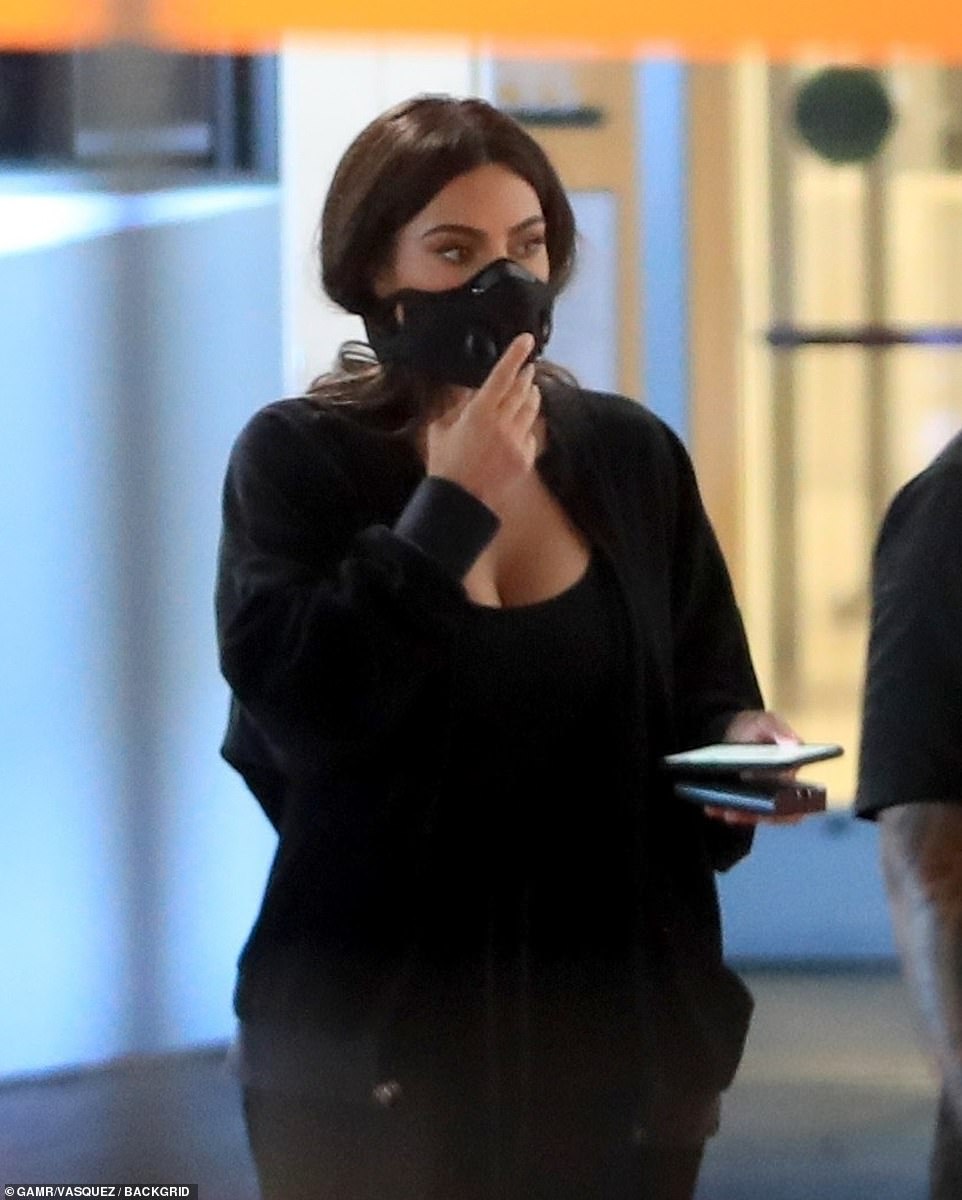 In a series of tweets Kanye also insisted he’s ‘quite alright’ amid concerns for his mental health following numerous Twitter rants and outbursts about his personal life with Kim and the Kardashian family.

It’ll no doubt be a setback for Kim who went to meet with her husband after he publicly apologized last week for airing their personal issues amid his bid to get on the presidential ballot in time for November.

Kim returned to LA alone on Monday following a quick trip to Cody, Wyoming, where Kanye is staying at their $14 million ranch.

The couple engaged in marriage crisis talks and were spotted seemingly arguing in Kanye’s car as they met for the first time in weeks amid a trying time for the rapper who is reportedly having a manic episode stemming from his bipolar disorder.

Kim appeared distraught as she sat beside her husband in the passenger seat as he talked animatedly, punching his fist into his hand. 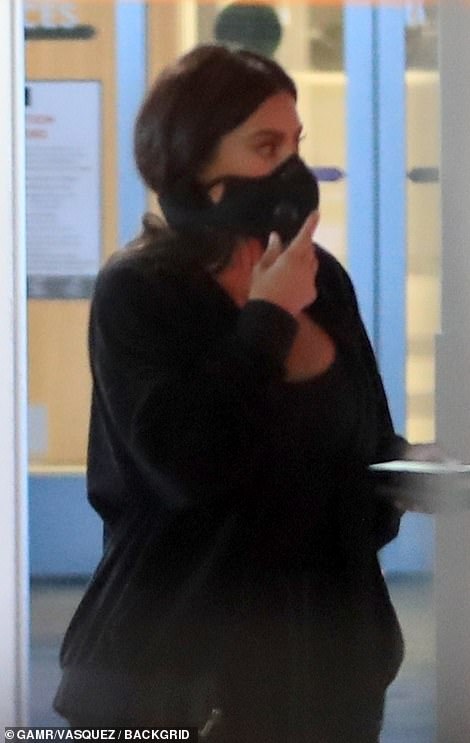 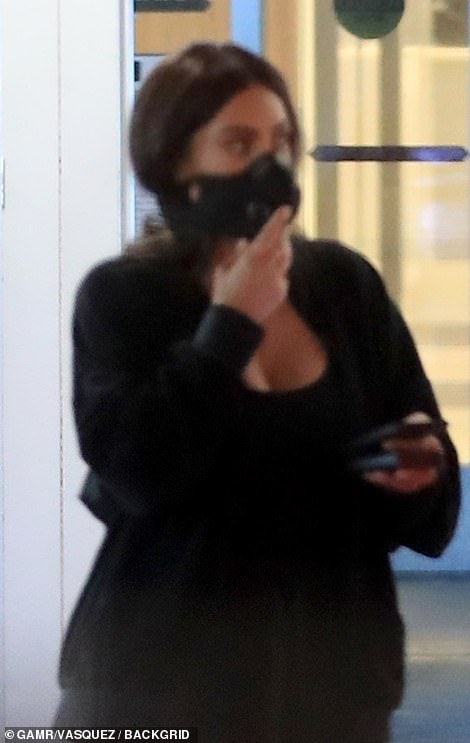 VIP: The 39-year-old TV star wore all black for the low-key outing with just her security detail 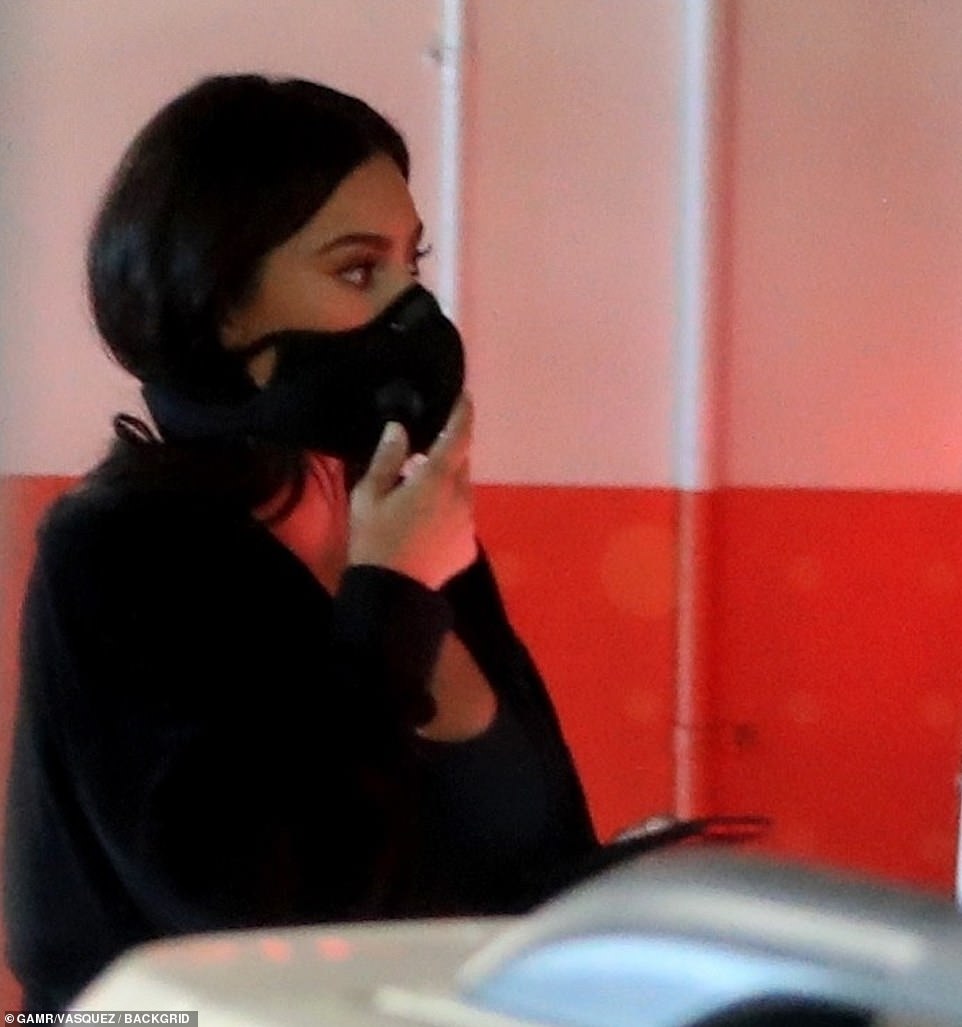 Crisis: Kim was spotted just hours before Kanye broke his Twitter silence to insist he’s ‘quite alright’ amid speculation he’s having a breakdown

Kanye took to Twitter on Friday to insist that his tears over abortion at his presidential rally were not a meltdown, and voiced ‘concern for the world that feels you shouldn’t cry about this.’

The Faded rapper wrote: ‘I cried at the thought of aborting my first born and everyone was so concerned about me. I’m concerned for the world that feels you shouldn’t cry about this subject.’

In a second tweet, Kanye added: There is a tactic of 4 D’s: Distract, Discredit, Dismiss To Destroy.

‘I am quite alright Take a second and think about what is being projected here.’

In his third tweet, he shared an article from the New York Post about the Planned Parenthood of Greater New York removing Margaret Sanger’s name from a Lower Manhattan clinic.

Sanger, who created organizations that grew into Planned Parenthood, will have her name removed because of her connection to eugenics.

It came as Kim hit back at claims she’s ‘torn’ over ending her marriage to Kanye after having crisis talks with the rapper in Wyoming earlier this week.

Setback: Kanye’s latest Tweets, where he again references aborting their daughter North, will no doubt feel like a set-back to Kim after she flew to Wyoming earlier this week to speak to her husband 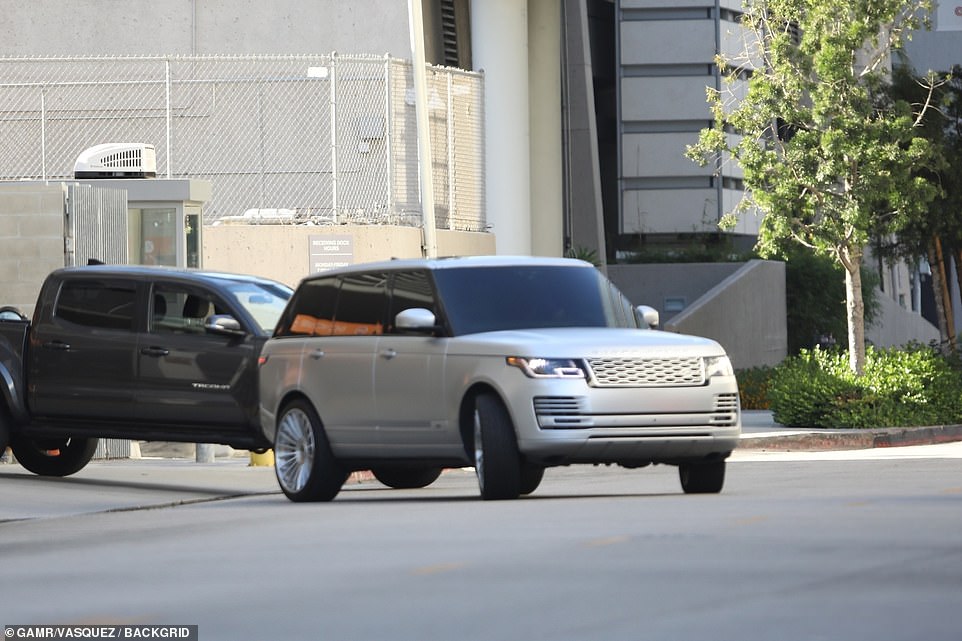 Heading home: Kim was seen leaving the building in her silver Range Rover 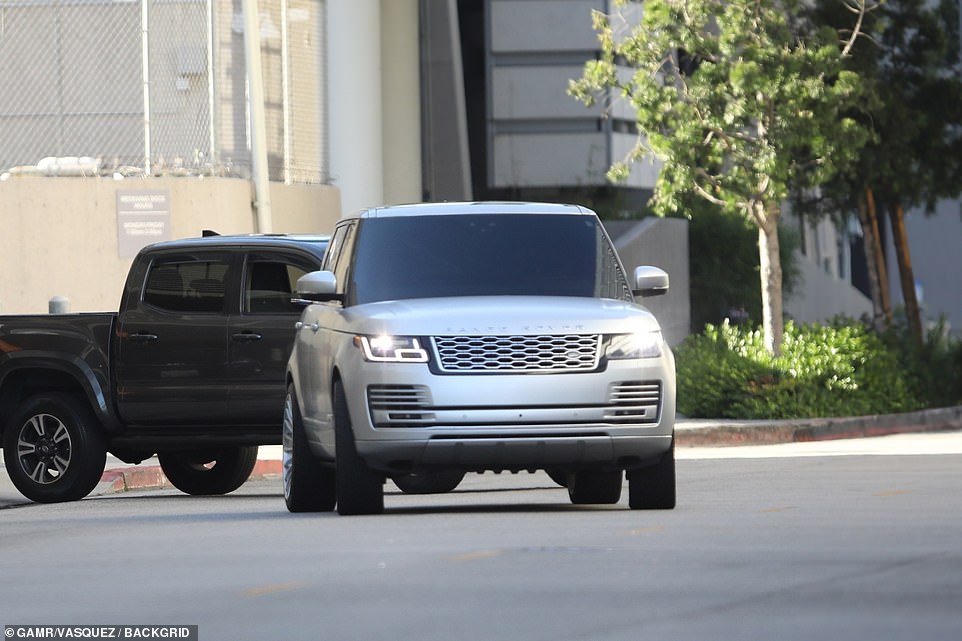 Trying time: The Keeping Up With The Kardashians star reportedly remains undecided about getting a divorce after ‘feeling like she has tried everything’ to save their six-year marriage

It’s been reported that the KKW Beauty mogul remains undecided about getting a divorce after ‘feeling like she has tried everything’ to save their six-year marriage.

It was also claimed this week that the couple have been living separately for a year.

However, a representative for the mother-of-four has shut down the claims on the star’s behalf, telling Dailymail.com the reports are ‘absolutely not true’.

In the report, shared by People, a source is quoted as saying: ‘She isn’t getting back what she needs from Kanye. She was to the point that she flew to Cody to basically tell him their marriage is over and to say goodbye.’

People reports that musician and fashion designer Kanye is eager to work on their marriage, recently issuing a public apology to her on Twitter after stating during a presidential rally that she contemplated aborting their first daughter North, seven. 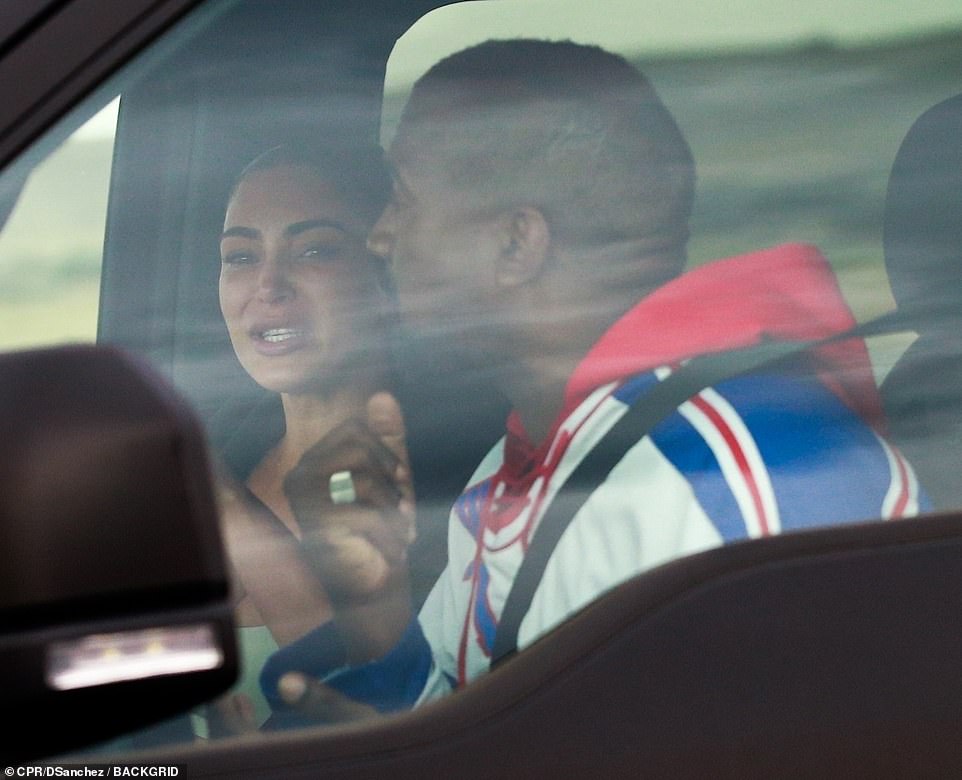 Emotional scene: The couple engaged in marriage crisis talks and were spotted seemingly arguing in Kanye’s car in Wyoming as they met for the first time in weeks amid a trying time for the rapper who is reportedly having a manic episode stemming from his bipolar disorder

However, a source claimed the apology is as far as his reparative efforts have gone, explaining: ‘He doesn’t seem to get what she is saying. He hasn’t changed anything that she told him needs to change.’

‘Kim is very torn,’ added the source. ‘The last thing she wants is to be divorced with four kids. She knows that she will be fine financially, but her concerns are the kids and the partnership. She is moving towards a divorce, but who knows if she will actually sign papers.’

Kanye, who launched a controversial presidential campaign this month, is said to have been based at his $14 million Wyoming ranch this past year, while Kim would visit only once a month with their four children.

Clearly the distance between the couple has been a source of contention, as during Kanye’s Twitter meltdown last week, he stated: ‘My family must live next to me,’ before adding: ‘It’s not up to E or NBC anymore.’

The rapper appeared to be hinting that he wanted Kim and the kids to be based in Wyoming and not in LA, where she films her E! reality series Keeping Up with the Kardashians.

‘I’m concerned for the world’: Kanye broke his silence on Twitter with two messages on Friday

In one tweet, he appeared lay out the ‘four D’s’ and hinted that he was being ‘dismisses and discredited’

‘Kanye has been in Wyoming for the last year. Kim goes about once every five weeks and brings the kids,’ one source told UsWeekly, adding: ‘they haven’t been spending time together because he moved his life completely to Wyoming and that’s not where their life is, their family is, their kids are in school or the larger family is.’

Meanwhile, it was reported yesterday that Kim has been thinking they ‘need to be apart’ right now, according to PEOPLE.

A source told the outlet: ‘She knows that it’s not healthy for her to be around him now, and it’s honestly not healthy for the kids. He needs to get his stuff together before he can be any sort of partner or father.’

Another report added that Kanye lives ‘full time’ in Wyoming as it is ‘best for his creativity’ according PageSix. 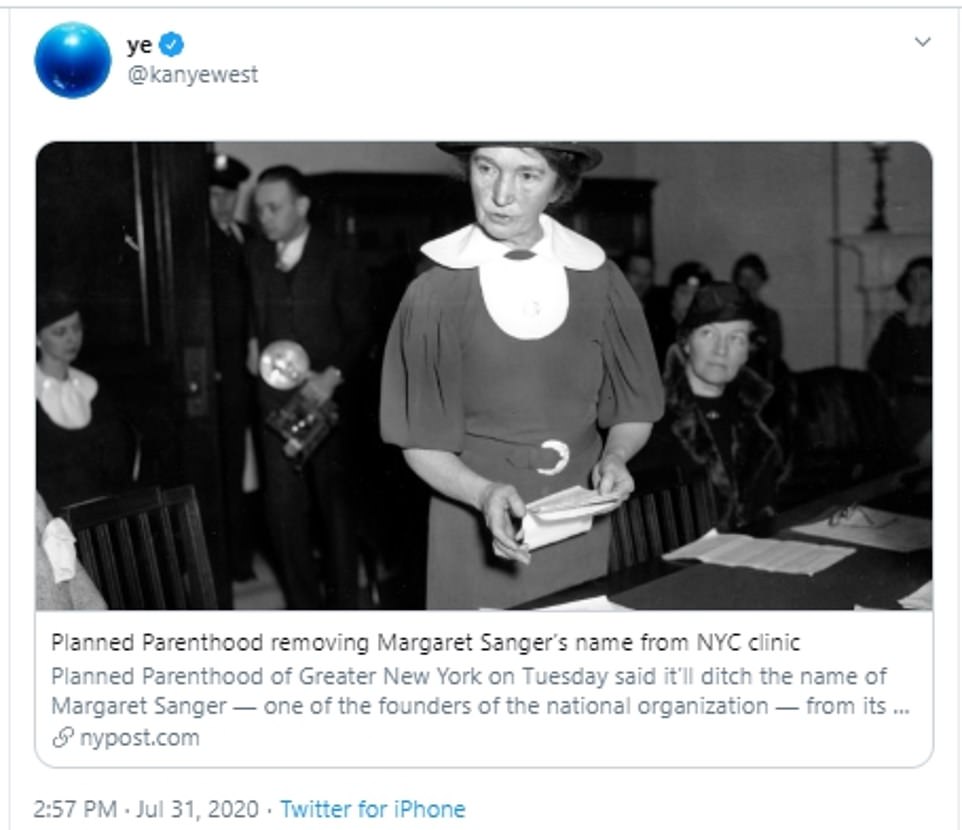 In another tweet on Friday, Kanye shared an article that appeared to further disparage Planned Parenthood after he was critical of the organization in recent weeks 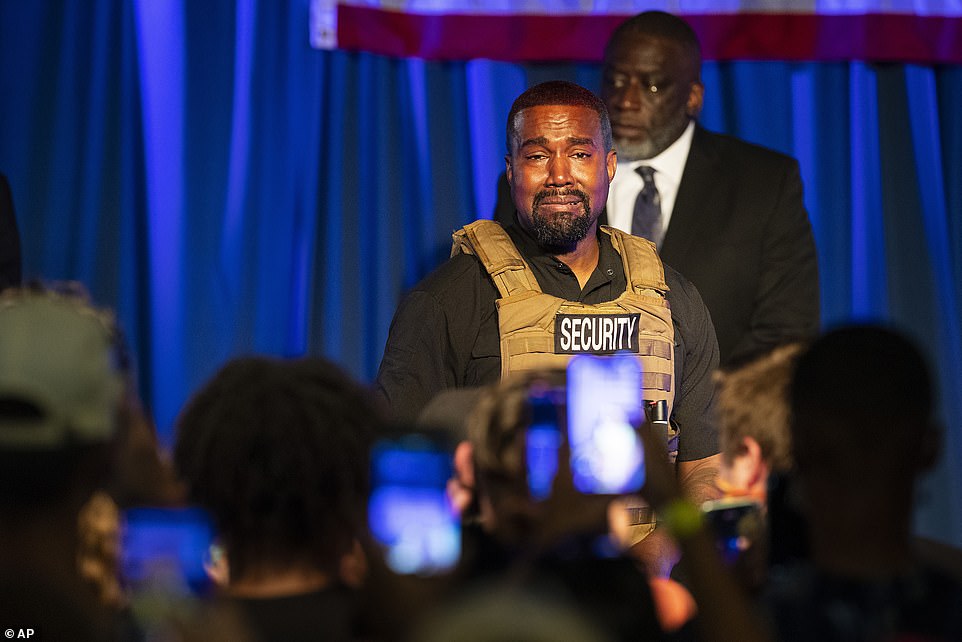 Kanye made his first presidential campaign appearance earlier this month in Charleston, South Carolina, and shocked with some of the things he said including talking about how he and Kim considered aborting their first born child, North 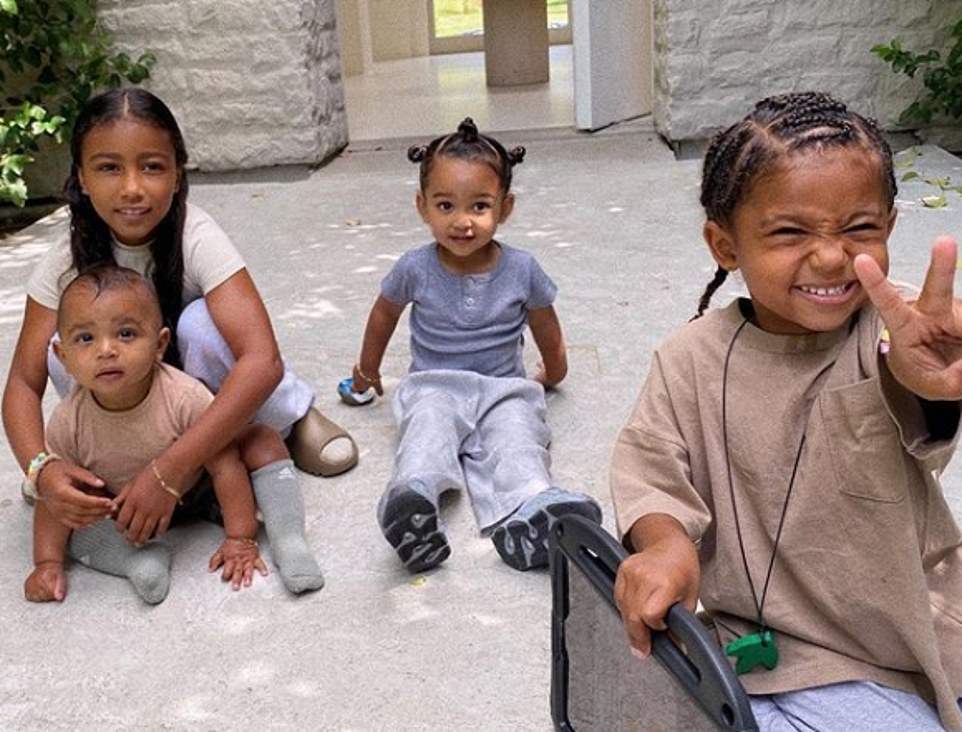 Kim is also said to have urged Kanye to quit his bid for presidency, which lead him to a disastrous first campaign rally in North Charleston, South Carolina, where he claimed that he and his wife has considered aborting their first baby, daughter North.

‘Kim feels trapped,’ a source added to People. ‘She loves Kanye and she thinks of him as the love of her life. But she doesn’t know what to do.’

However, multiple outlets have reported that the couple do not want to get divorced.

Last week, Kim took to Instagram following Kanye’s controversial behavior, admitting that she was ‘powerless’ amid his meltdown, calling her husband ‘brilliant but complicated’.

The reality star said ‘his words sometimes do not align with his intentions’ after Kanye last night claimed he has been ‘trying to get divorced’ from Kim since she met his fellow rapper Meek Mill at a hotel.

Kanye said last Tuesday that Kim was ‘out of line’ to meet Meek Mill at a hotel in Los Angeles to talk about ‘prison reform’, and blasted her mother Kris Jenner as ‘Kris Jong-Un’ while accusing the pair of ‘white supremacy.’ 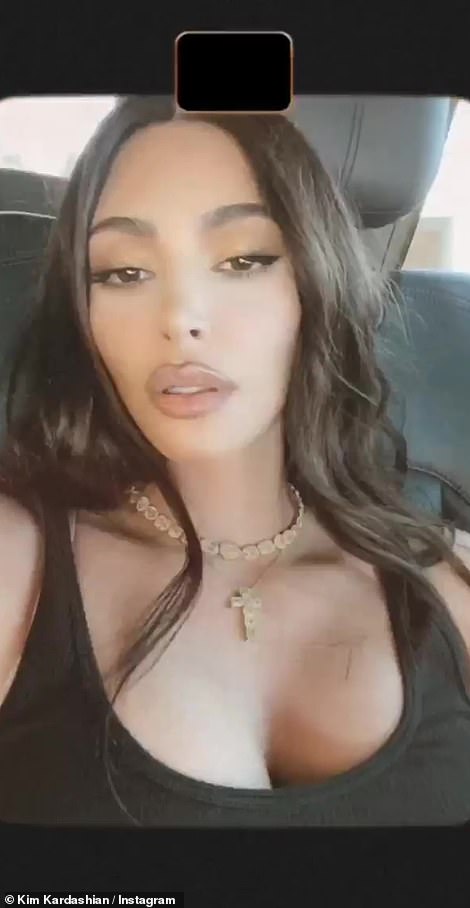 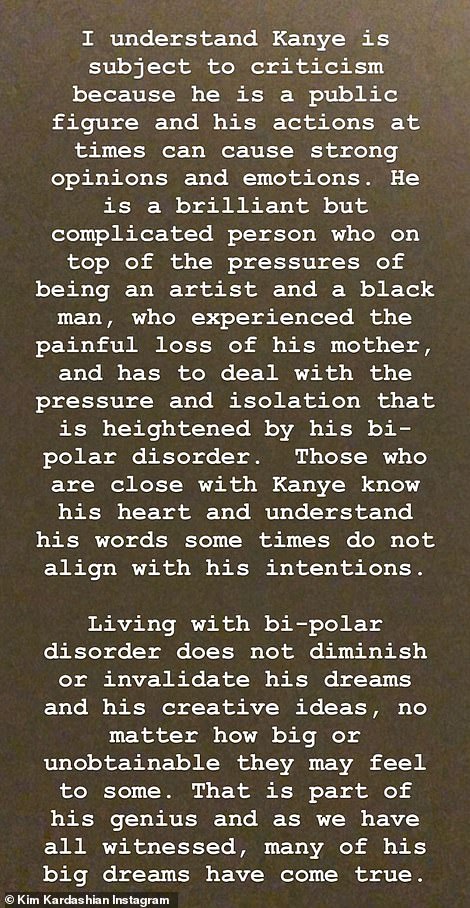 Last week, Kim took to Instagram following Kanye’s controversial behavior, admitting that she was ‘powerless’ amid his meltdown, calling her husband ‘brilliant but complicated’

However, Kanye apologized to his wife in a tweet last week, amid reports that he went to hospital to be treated for anxiety.

The rapper tweeted: ‘I would like to apologize to my wife Kim for going public with something that was a private matter. I did not cover her like she has covered me.to [sic] Kim I want to say I know I hurt you. Please forgive me. Thank you for always being there for me.’

His apology came after Kim gave a frank and honest statement about the situation to her fans, sharing three pages to her Instagram story last Wednesday saying: ‘Those that understand mental illness or even compulsive behavior know that the family is powerless unless the member is a minor.’

Kanye has been open about his struggle with bipolar disorder and, in 2016, he spent time in hospital after a ‘psychiatric emergency’ that forced him to cancel 21 concert dates. 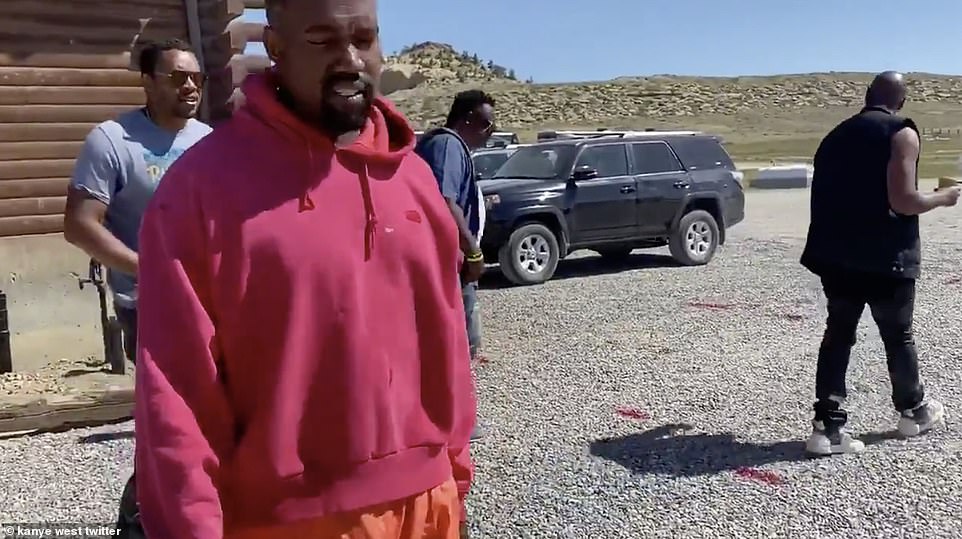 Kanye has been open about his struggle with bipolar disorder and, in 2016, he spent time in hospital after a ‘psychiatric emergency’ that forced him to cancel 21 concert dates. He is pictured here in a video clip he shared last week