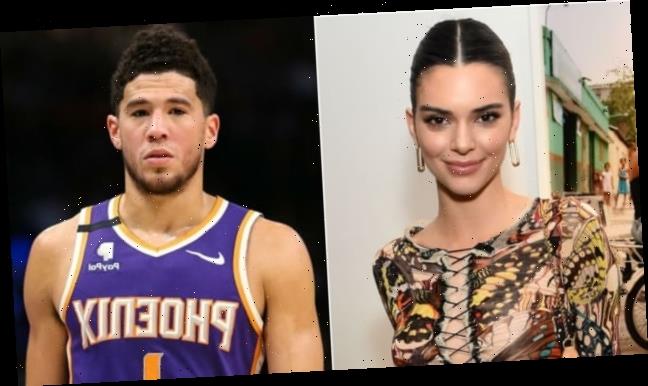 That means she only has 156 million Instagram followers, as opposed to Kylie’s 221 million.

So yeah, Kendall’s life is still very much on display, but unlike her sisters, she’s able to keep some aspects of it private.

And so, when Kendall goes public with a relationship, it’s a very big deal.

For one, it’s not something she does very often, so it tends to take fans by surprise.

On top of that, she has the ability to keep such things private (to an extent) so when she shares her happiness with the world, it’s usually interpreted as a sign that the relationship is quite serious.

These days, Kendall is dating Devin Booker of the Phoenix Suns, and it appears that the 25-year-old is absolutely smitten with her new boo.

Fans began to realize the situation was serious when Kendall and Devin went camping together.

(When a Victoria’s Secret model engages in such a decidedly non-glam activity, you can be sure she’s pretty taken with her companion.)

A few months later, Kendall and Devin spent Valentine’s Day together, and judging from Kendall’s social media posts, it seems they only left the bedroom to rehydrate.

All of this openness has led to rumors that Kendall and Devin are ready for marriage.

Especially after Kendall posted the selfie below, which was obviously taken in Devin’s closet (are these two living together?!).

But we’re afraid we have some bad news for anyone who’s shipping Kenvin (or Dendall, if you prefer).

While they’re definitely still dating, and their relationship appears to be moving in the right direction, they’re also pretty far from the point of marriage.

“Kendall was ready to take her relationship with Devin to a more public level and get rid of any unnecessary speculation in the media,” a source close to the situation recently told ET Online.

“She felt ready to share a bit more than she has in the past when she posted the photo of them on Valentine’s Day,” the insider added.

The source went on to reveal that Kendall and Devin’s relationship is definitely serious, but it seems marriage is not yet up for discussion.

“Their relationship has gotten more serious and Devin is really laid back and not all about fame or being in the spotlight all the time, which Kendall really likes,” the tipster said.

“He makes her feel comfortable and safe and he’s super respectful, which are all qualities she loves.”

But even if she’s not yet talking about it with Booker, it seems marriage and family are very much at the forefront of Kendall’s mind these days.

“I want kids badly — soon, too,” she said during a recent appearance on Hailey Bieber’s YouTube channel.

When the topic of “saving yourself for marriage” came up, Kendall revealed that the married life is not yet on her horizon — though it seems she’s hoping that will change.

“I have not. No one’s ever proposed to me. I’ve never even been engaged… I’m not married,” she told Hailey.