LOS ANGELES — At the end of a joint news conference on Wednesday, Paul George and Kawhi Leonard were handed Clippers jerseys, one marked No. 13 for George, the other No. 2 for Leonard.

As photographers jostled for position in front of the dais where the two stars stood, Coach Doc Rivers seized an early opportunity to fix a broken play, instructing George to stand to Leonard’s left so that their numbers, when combined, read 213, Los Angeles’s primary area code. Rivers appeared pleased with his handiwork.

They were all at Green Meadows Recreation Center, a few miles from the arena where George and Leonard will try to lift the Clippers to new heights next season. By acquiring them this summer — Leonard as a free agent, George in a blockbuster trade with the Oklahoma City Thunder — the Clippers made clear they are determined not only to escape from the enormous shadow cast by the Lakers, but also to vie for N.B.A. championships.

That moment, he said, has yet to come. If nothing else, the Clippers’ days as a league laughingstock are long gone. Leonard, who is a little more than a month removed from leading the Toronto Raptors to their first championship, and George, a six-time All-Star, have instantly positioned the Clippers as title contenders — and perhaps the favorite to win it all next season after a summer of momentous player relocation.

“For me, it was a chance to come back home and be a part of something that was already special,” said George, who, like Leonard, grew up in Southern California. “This is surreal.”

George, Leonard and Rivers appeared at the news conference with Steve Ballmer, the team’s owner, and Lawrence Frank, the president of basketball operations. Ballmer, a former chief executive of Microsoft, is the type of person who sounds highly caffeinated in the most ordinary circumstances. On Wednesday, he appeared in danger of combusting.

“I have these notes,” he shouted, “but I have to say I’m just fired up to be here today! Pretty cool! Pretty damn cool!”

As the gym filled with applause from team staff members, Ballmer emitted a high-frequency “Woooow!”

Leonard and George are two of the lower-key players in the league, which made for an unusual contrast on the dais. But they do figure to be dynamic teammates, a pair of multidimensional wings who can score and defend. 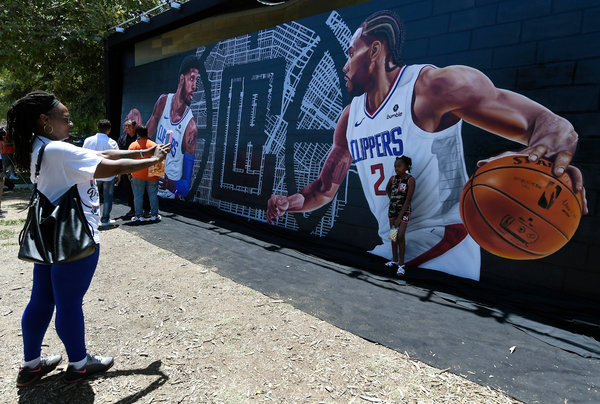 “I think the way we play is a lost art in the N.B.A. — guys who go out and play on both ends,” George said.

He and Leonard recalled how they both had thought — at least for a brief moment years ago — that they would be teammates much sooner than this. George was playing for the Indiana Pacers in 2011 when they drafted Leonard.

George said he was confused: Don’t we play the same position?

“I was a bit nervous for that competition that was coming,” he said.

So he was relieved when the Pacers made a draft-night deal that sent Leonard to the San Antonio Spurs. In hindsight, George said, he sometimes wonders what it would have been like to play alongside Leonard in Indiana. Now, they will have the opportunity in Los Angeles.

“This was destiny,” George said.

While George thanked the Thunder organization for working with him once he requested the trade, Leonard was just as effusive in his gratitude for the Raptors and the city of Toronto. He thanked his former teammates and coaches, the fans, the doctors who delivered his son and even the Toronto-area restaurateurs who let him dine for free.

“Took advantage of that,” Leonard said.

Leonard said he had already huddled with Rivers over lunch to discuss next season. (They even dissected some game film together, Leonard said.) George had to cancel his dinner plans with Rivers this week, but he had a decent excuse: He was house hunting.

They are joining a playoff-ready team for a franchise that has never made it past the conference semifinals. In his prepared remarks, Frank cited the Clippers’ returning players as a key factor in the team’s successful recruiting pitch.

“It was the culture they created that made Kawhi and Paul want to join our group,” Frank said.

He also described the Clippers as “drama free,” which came across as a not-so-subtle way of trolling the Lakers, who were as much telenovela as basketball team last season.

Leonard said he appreciated the Clippers’ discretion during free agency while he met with others teams, including the Lakers, and weighed his decision.

“I felt like they were true to their word,” he said. “Nothing really got out.”