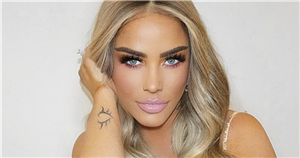 Katie Price is reportedly making her first public appearance on Friday just days after she was allegedly punched in her Essex home.

The 43 year old is said to be due to attend the British LGBT Awards later this week, which will be held at The Brewery, London, reports The Sun.

Katie, who was recently pictured for the first time with a bruised face, was rushed to hospital in the early hours of Monday 23 August morning with "facial injuries" after the alleged attack.

A 32 year old man, who was arrested on suspicion of assault, theft and coercive and controlling behaviour, was released on bail until 20 September on Tuesday morning.

The British LGBT Awards is set to be hosted by Gok Wan and RuPaul's Drag Race UK winner Lawrence Chaney with a star-studded guest list with the likes of Ellie Goulding, Mel C and Alesha Dixon said to be attending.

It comes after Essex Police said in a statement following the alleged incident: "We were called by colleagues in the ambulance service to reports of an assault shortly after 1.30am this morning, Monday 23 August.

"We arrived and found a woman had sustained a facial injury which required hospital treatment.

"A man was arrested a short time later on suspicion of assault."

According to The Sun Online, Katie's £50,000 engagement ring gifted by her fiancé Carl Woods when he proposed in April, 10 months into their romance, was stolen during the alleged attack.

A source said: "Katie no longer has her ring. It cost thousands but went during the incident."

The star spoke out on the incident after being discharged from hospital on Monday. "I've got a big bruise, my face is all puffy, and I went to hospital," she told the same publication.

"I'm still all dazed. I'm devastated. I've told police that I was assaulted, and am in shock that this happened.

"I ran away after being punched – I ran to Harvey's house nearby and have now done damage to my feet, which I previously injured. I can't say any more."

An insider also said the mum-of-five is "too upset" to return to her home, where the alleged assault took place, and is staying with friends.

They said: "Katie is so upset and far too emotional to go back to her home.

"She's staying with friends and resting up to recover from her injuries. She's sent friends to pick up some stuff she needs from the Essex house so she's comfortable."

For all your updates on Katie Price, sign up to our daily OK! newsletter.