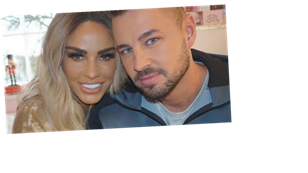 Katie Price is reportedly doing anything to follow her dream of having twins with her new partner and ex-Love Islander Carl Woods, 31.

The already mum-of-five, who recently dropped a hint she could be pregnant by sharing a photo of pregnancy vitamins, wants a baby as soon as she can and hopes she can have another two children with her beau.

An insider revealed to OK!: "Katie dreams to fall pregnant. She’ll consider anything."

They continued: "She won’t be hanging about because she wants a baby now. She’s always dreamed of having twins.”

In October, broody Katie told us she has already opened up to her mum about what it will be like for her to fall pregnant for the sixth time.

“We’re excited about everything; babies and marriage,” she shared.

“I’ve even discussed it with my mum and what it will be like.”

The reality star shares her children Junior, 15 and Princess, 13, with her ex-husband Peter Andre, and is also a mother to her son Harvey, 18, Jett, seven, and Bunny, six.

It comes just days after Katie sparked pregnancy speculation after she posted a picture of a bottle of Folic Acid on her Instagram story. Alongside the snap, Katie wrote: “Yep it’s that time, get ready @carljwoods,” with two red heart emojis before writing: “I love you boo.”

Pregnant women “should take a daily supplement of 400 micrograms of folic avid before they’re pregnant and during the first 1 weeks of pregnancy, when the baby’s spine is developing,” according to the NHS.

Katie and Carl previously shared their plans to have children together in an interview with new magazine at the end of last year.

“I’d have as many as I can,” she confessed, before Carl agreed by adding: “I want two and Kate wants seven altogether, so the maths actually works.”

Elsewhere, the TV star recently gushed over her boyfriend with The Sun, as she shared: "It’s all happened really fast but I know Carl is the man for me.