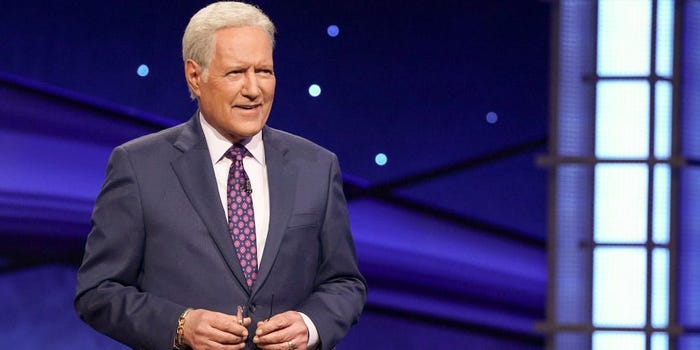 "Jeopardy!" host Alex Trebek has died at the age of 80.

The Emmy-winning TV host announced he was diagnosed with Stage 4 pancreatic cancer in March 2019.

The game show confirmed Trebek's death in a tweet on Sunday that said he "passed away peacefully at home early this morning, surrounded by family and friends."

Episodes of "Jeopardy!" hosted by Trebek will air through December 25, Sony Pictures Entertainment confirmed to Variety on Sunday. Sony also told Variety that the show would not immediately address plans to pick a successor to Trebek.

In honor of Trebek and his 36 years hosting the series, former contestants and fans of the game show took to Twitter to recirculate many of the TV icon's uplifting and entertaining "Jeopardy!" moments.

In a recently aired episode, a 'Jeopardy!' contestant told Trebek about his impact on him

In an episode of "Jeopardy!" that aired on Thursday, the segment's winner, contestant Burt Thakur, had an emotional exchange with Trebek after the show.

"Any family members back home cheering you on?" Trebek asked.

"You know, here's a true story," Thakur told Trebek. "I grew up, I learned English because of you. And so, my grandfather, who raised me — I'm gonna get tears right now — I used to sit on his lap and watch you every day, so it's a pretty special moment for me."

Thakur wrote on Twitter that he was "grateful to have competed."

In November 2019, contestant Dhruv Gaur, who was competing in the show's Tournament of Champions, wrote a message of support to Trebek after the host announced his pancreatic cancer diagnosis that March.

For his response to a "Final Jeopardy" question, Gaur wrote: "What is: We love you, Alex!"

When Gaur's note appeared on screen, Trebek read it aloud before getting choked up.

On Sunday, several users reshared the clip on Twitter in memory of Trebek.

On Sunday, Gaur wrote that he was "lost for words" in regard to Trebek's death.

"I'm full of gratitude for the joy Alex brought to homes like mine every night," Gaur wrote on Twitter. "I feel lucky for the few episodes I got to share this show with him."

A clip from a "Jeopardy!" episode that aired in 2016 was shared widely on Twitter as people remembered Trebek.

In the video, contestant Susan Cole told Trebek that she was a fan of music known as "Nerdcore hip hop," and her explanation of the genre and the people who listen to it elicited a memorable response from Trebek.

"It's people who identify as nerdy rapping about the things they love — video games, science fiction, having a hard time meeting romantic partners," Cole said.

"Losers, in other words," Trebek said in the clip.

Some Twitter users reshared clips where Trebek had expertly carried a tune or rapped lyrics on the game show. In one episode, Trebek demonstrated his musical talent in a category of questions called "Let's rap, kids."

Other fans recalled that in March, Trebek lifted spirits when he recited the lyrics of Lizzo's "Truth Hurts," including the beats "Bom bom bi dom bi dum bum bay."

The artist tweeted: "The soundtrack of my life was hearing his voice every night at 7pm."

"Jeopardy!" fans shared a variety of moments that showcase Trebek's personality and sense of humor — including his witty reactions to contestants' answers.

Ken Jennings, who holds the record for the longest winning streak on "Jeopardy!" after winning 74 times, also paid tribute to Trebek on Sunday and acknowledged that the game show's "family" included millions of people.

"Alex wasn't just the best ever at what he did," Jennings wrote. "He was also a lovely and deeply decent man, and I'm grateful for every minute I got to spend with him."